VICTOR STEFANESCU
Protesters outside of Mercy Hospital St. Louis on Sunday protest a policy to require employees to get vaccinated.

Charles Wagstaff likes to water the plants lining the patio of Pizza Head on South Grand. It’s not his patio or his restaurant — he just does it.

Armed with translucent gloves and a face mask, the 88-year-old tends to the well-kept patio that lies under the second-floor apartment he has called home for 30 years. And he wears those gloves when he goes on the bus, too.

“I wear the gloves because everybody touches the overhead rail and the poles, just trying to take care of me and everybody I come in contact with,” Wagstaff says.

It’s an ethos that officials urged people to adopt as St. Louis and St. Louis County returned to mask mandates on Monday in hopes of curbing a new surge of COVID-19 cases. As of Monday, those aged five and older, with some exceptions, are required to wear masks indoors and on public transportation in the city and county.

“We came together once to protect each other, and I’m confident we can do so again,” St. Louis Mayor Tishaura Jones said Monday at a news conference.

But not everyone sees mask-wearing in the same way as Wagstaff. Political opponents of Jones and St. Louis County Executive Sam Page immediately announced plans to fight new mandates. Attorney General Eric Schmitt filed a suit against the city and county, claiming that the public health orders were “unacceptable and unconstitutional.”

It was another sign of the divide that persists across the region and state, even as outbreaks of the delta variant have turned Missouri into one of the country’s COVID hotspots.

In Creve Coeur, Conway Road at North Ballas is usually calm on Sunday nights. The intersection borders Mercy Hospital St. Louis, and aside from night-shift traffic, you might see a few pedestrians from the wealthy St. Louis suburb.

But this past Sunday night, the intersection was blaring.

Hundreds of demonstrators lined sidewalks equipped with anti-vaccine posters, Gadsden flags and a stretched banner advertising a COVID conspiracy site. There were chants and recitations of the Pledge of Allegiance.

The demonstrators were there, according to organizer Meaghan Hagen, to protest Mercy’s upcoming vaccination requirements for all employees.

“I cannot believe that in the United States of America, we have people that are having to choose between an experimental medication or their job,” Hagen says.

Mercy announced the new requirement as the delta variant of COVID-19 rapidly spread throughout the state, according to a news release on July 7.

“It is essential that we take these steps in order to protect the health of our co-workers and our patients at Mercy,” Dr. William Sistrunk, a Mercy infectious disease specialist, says in the release. “As health care leaders in our communities, it is important we set the standard to prevent the spread of COVID-19.” 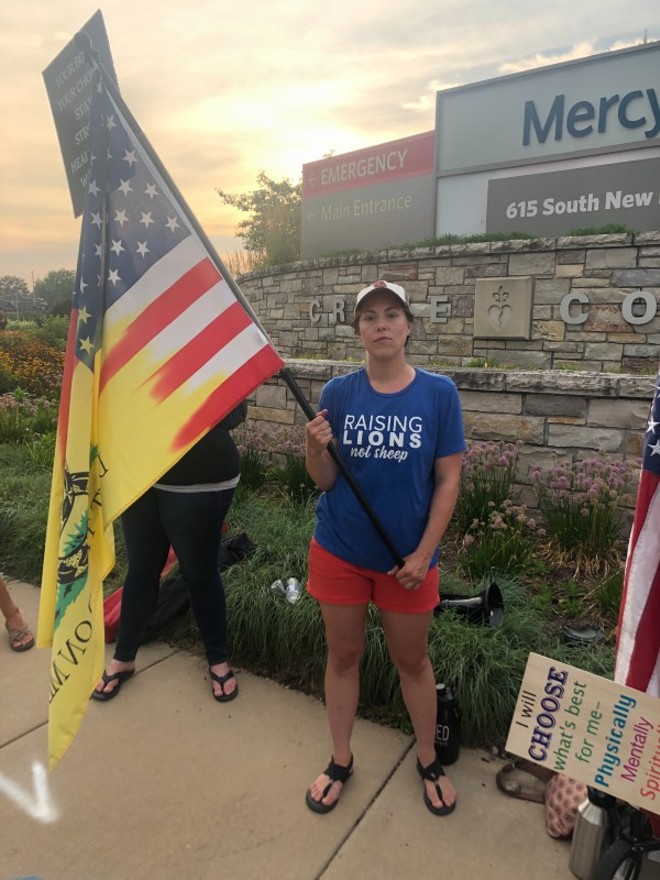 Hagen says the protest focused on vaccine mandates, and not the shots themselves. But a quick scan at some of the posters, such as one that reads “Fauci Ouchi,” blurs that focus. It’s a mix of anti-mandate messages, arguments that claim Christian authority and at least one likening the vaccine requirements to Nazi tactics.

Ed Granger, a retired Ballwin resident, says the vaccine is a trial drug — a popular talking point for vaccine skeptics, but one that discounts thousands of clinical trials and testing before the Food and Drug Administration granted Emergency Use Authorization.

Despite Granger’s rhetoric around vaccine mandates, he says if he knew the science surrounding vaccines, he would be more open to the concept of receiving a vaccine. But if people show up at his front door with a vaccine he would apparently pull something on them.

“Give me the science, give me the informed consent,” Granger says. “And then, let me make my choice. Don't shove it down my throat. Don't come to my door with a vax because I'll say, ‘You pull yours out, I'll pull what I got for you.’”

Granger says that same dynamic goes for masks — he would be more willing to wear them if people showed him scientific backing for their efficiency.

Perhaps only a person or two on the jam-packed sidewalks were wearing masks. Also, noticeably missing from the Facebook-generated protest, were Mercy employees. I could only find one woman, who said she worked for the health system.

The woman, who would not give her name, says she works at a Mercy facility in Jefferson County. She says she will move to a different state before complying with a vaccine mandate.

She, like Granger, was wary of the science behind the vaccine.

“First of all, it is not FDA approved,” she says. “There's not enough research. They really did just put it out quickly.”

The woman claims about 50 percent of the hospital workers that drove by honked in support of the protest. Hagen says people under vaccine mandates are terrified, but concedes the protest is unlikely to affect Mercy’s mandate.

And that seems to be the case. In an email to the Riverfront Times, a Mercy official writes the hospital’s position remains unchanged.

“While Mercy respects differences of opinion about the COVID-19 vaccine and co-workers’ right to assemble and make their voice heard, Mercy’s stance remains unchanged,” writes Joe Poelker, a senior media relations specialist at Mercy. “We will require all co-workers to be vaccinated by Sept. 30 to protect our co-workers, patients and communities.”

Back on South Grand, Wagstaff was much more optimistic about vaccines than the demonstrators at the protest.

“From a very early age I had the flu shots and pneumonia shots, the diphtheria shots, the smallpox shots, three polio shots,” he says. “I mean, I was brought up with the age of inoculation. I think [health experts] know what they're talking about. I don't understand people that just still are in denial.”

And Paul Lubbers, a pharmacist at the Medicine Shoppe on South Grand, believes vaccinations are key for St. Louis’s return to normalcy.

“We want to get back to a little bit of normalcy here in St. Louis, but obviously, we can't do that if people are still, you know, going around unvaccinated or not wearing their masks appropriately and spreading it around,” he says.

Lubbers says people coming into the store today were compliant with the mandate. He also says if individuals come into the store maskless, the pharmacy can sell masks to them. Ali Mohsef, owner of The Vine Mediterranean Cafe and Market, says his business is complying with the new mandate.

“If it is necessary to curb the outbreak, then it's fine with us,” he says.

Across the street at Rooster South Grand, Assistant Manager Teresa Haines, says some patrons forget to put their masks back on when going to the bathroom and moving within the brunch spot. Even so, she has not been met with any major opposition to the new mandate.

At Rooster, enforcement of the mandate has come from the business itself. Haines says the city did not provide them with information regarding the new mandate, to her knowledge.

“Our boss sent us an email this morning,” Haines says. “We told the crew at the beginning of [the] shift that this was happening, but we did not, as far as I know, we did not receive any information from the city, other than what was reported on.”

Masks, Wagstaff says, are a way for him to look out for himself.
© 2022 Riverfront Times