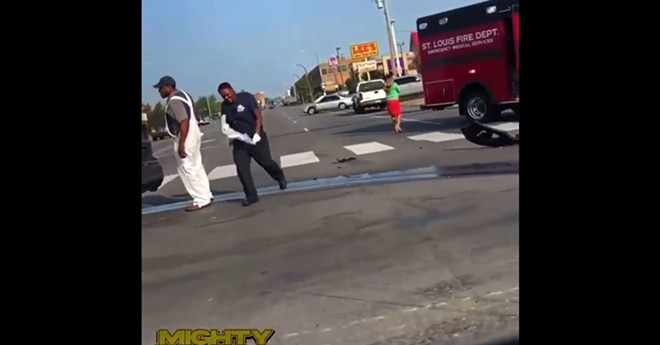 A motorist driving past the scene of an accident involving a St. Louis Fire Department ambulance on Wednesday captured the moment an EMT ran to aid an adult and child still inside a second crashed vehicle — even though, as shown in the clip, the EMT was injured herself.

The footage was filmed by Instagram user @Mightymedia and reshared on Twitter this afternoon by the St. Louis Fire Department. It shows EMT Victoria Scott as she runs toward another vehicle while unwrapping a bandage.

In the clip, Scott appears to grimace in pain and is visibly limping.

Medic 26 involved in a motor vehicle accident; and although injured herself— Emergency Medical Technician Victoria Scott springs into action to render emergency medical aid, ensuring the well-being of the other injured individuals involved in the incident. #YourFireDepartment pic.twitter.com/vmJPAUpYcf


In an email, Captain Garon Mosby wrote that the accident occurred Wednesday morning around 8:42 a.m. near the intersection of Natural Bridge Avenue and North Kingshighway Boulevard in north St. Louis City.

The ambulance, Medic 26, " was responding to a medical emergency and involved in a motor vehicle accident," Mosby wrote. "Both members of Medic 26 rendered aid to the injured occupants; an adult and a child were transported urgently in serious condition."

Both Scott and the other EMT are currently assigned to "Light Duty," while the St. Louis Fire Department investigates.