When Mary O’Leary wants to explain what her iconic hot dog shop, Woofie’s Hot Dogs (1919 Woodson Road, Overland; 314-426-6291), means to people, her thoughts immediately go to her longtime customer, Pete. According to O’Leary, Pete has been coming in every day since the first owner, Charlie Eisen, was in charge; considering he sold the place in the late 1990s, O’Leary thinks that’s quite a commitment.

“When I think of why we’ve stood the test of time, I think of Pete, who’s been coming here since Charlie owned it,” O’Leary says. “He’s there every day between 3:15 and 3:45 [p.m.] unless he’s out of town, and he gets the same hot dog every single day. We’re all like, ‘Pete’s coming’ when we see him come around the corner so we can make sure to have his meal ready for him.”

O’Leary understands that the legions of fiercely loyal customers like Pete come to Woofie’s for more than the delicious Vienna beef hot dogs. Since the 1950s, the Overland spot has been a mainstay for people seeking casual soda-shop fare, first as the diner Hamburger Heaven, and eventually as Woofie’s when Eisen took over in 1976. That such a place still exists in essentially the same form since its inception — its only real updates were a good cleaning and a fresh coat of paint when O’Leary and her husband, Craig Smith, took over the place in 2008 — is a testament to its nostalgic pull. From the quintessential blue and orange Vienna beef brand colors that give the space its vintage hot dog shop look to the dogs themselves, Woofie’s has remained the same over the years, offering a consistent thread to the past that makes the place feel like a time capsule. 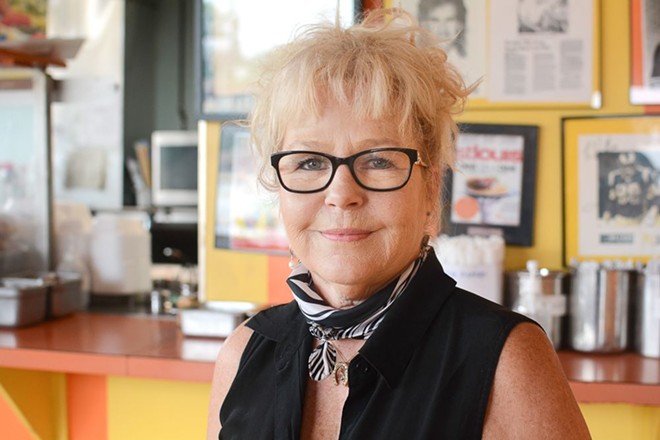 O’Leary would never think of changing that. As much a steward of the restaurant as its manager, she fell into the business thanks to her husband and has felt a responsibility to keep its identity intact ever since, even if she wasn’t so keen on the spot in the first place. After all, Smith bought it on a whim, after a lunch conversation with the former owner, a man she knows only by the first name Paul. According to O’Leary, Paul expressed to her husband that he had lost interest in operating Woofie’s after his wife’s death, and he was looking for someone to buy him out. Without giving it another thought, Smith volunteered.

“He came home and told me that he bought Woofie’s,” O’Leary recalls. “I asked him, ‘What’s Woofie’s?’ He told me that it was a hot dog place, and he was surprised that I’d never been there. We went out there to look at it on a January afternoon, and I was not impressed. I always wanted to own a place like a diner, where kids would come after school and do their homework, and here I get Woofie’s. I remember telling him the first thing we have to do is clean the place up.”

ANDY PAULISSEN
O'Leary says that the key to Woofie's success is that its hot dogs haven't changed one bit.

If O’Leary was apprehensive about taking over Woofie’s at first, she had a change of heart in no time. Though she still retained her full-time job managing IT for a law firm, she dove head-first into the restaurant business, relishing her interactions with the customers who animated the place. From local celebrities whose faces are plastered on the walls in old photographs to people like Pete who come in every day, O’Leary has enjoyed becoming a part of her customers’ lives — even those who live far away.

“I was running a Fourth of July special one year, and I had a woman from Georgia call and ask if she could get the same deal the next time she came into town,” O’Leary says. “I told her, ‘Of course.’ I have people message me from all over the country. We also have one woman who would drive in every Saturday from Ste. Genevieve and get ten dogs, double-wrapped. People come from all over.”

ANDY PAULISSEN
The photos on the walls are a visual representation of the restaurant's storied history.

Though she understands that Woofie’s nostalgia is a big part of the draw, O’Leary knows that the restaurant wouldn’t be what it is without the quality of its food. The restaurant uses only the authentic Vienna dogs, brought in straight from Chicago, and cooks them to order; she’s emphatic that the restaurant only drops the dogs on the flattop the moment a customer walks in the door. O’Leary also notes that the restaurant steams the buns rather than heating them in the microwave like other places, and that she insists on using only ultra-fresh toppings. Nothing sits on the line, and if it doesn’t look good enough to her discerning eye, she won’t serve it.

Now dedicated to operating Woofie’s full time after retiring from her law firm job in December 2019, O’Leary feels like she is in a good flow with her team. She makes it a point to be at the restaurant and interact with her guests as much as possible, because she wants them to feel a real connection to the place; plus, it allows her to animate the restaurant with her self-described big personality. Having sold its millionth hot dog last January, it’s clear that this approach is working out just fine.

“I think with all of our personalities — and being kind of crazy — things just flow the way they are supposed to flow,” O’Leary says. “You just do fun things with customers and have fun, and that’s what makes Woofie’s Woofie’s. I don’t know what made it what it was years ago, but that’s what it is today, and I haven’t had anyone leave disappointed.”

We are always hungry for tips and feedback. Email the author at [email protected]
© 2023 Riverfront Times