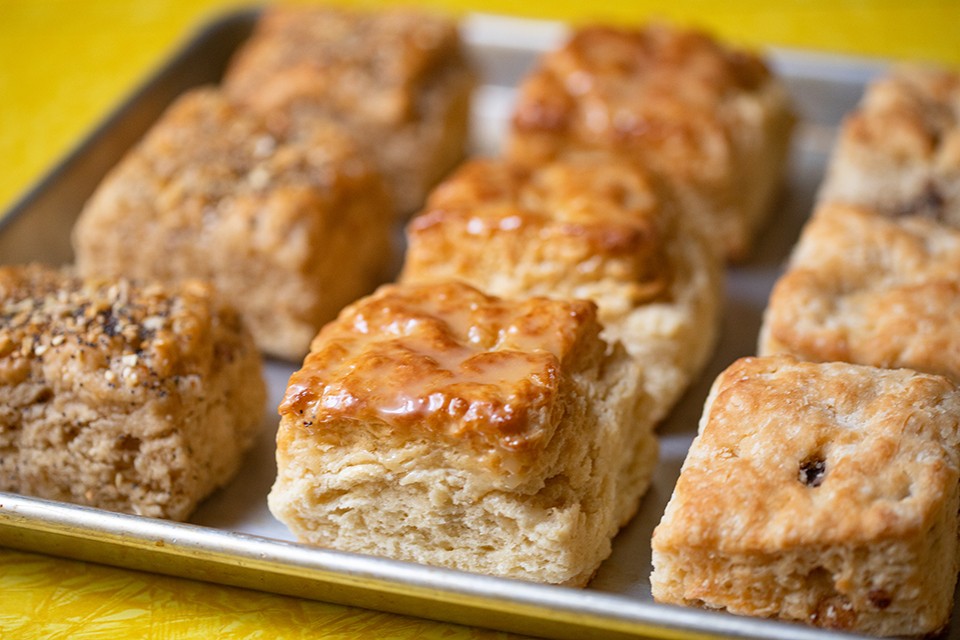 The first time Honey Bee's Biscuits + Good Eats owner Mike Shadwick made breakfast, it didn't go so well. He thought he'd do something nice for his mom, so he went into the kitchen, cracked two eggs into a bowl, plopped in a scoop of margarine, mixed it up and presented it to her without the concoction ever hitting a frying pan. Considering he was just three years old, that mistake was understandable, but it didn't deter his family from letting him play around with food, which fostered a love of cooking — especially breakfast food — that he carried with him into adulthood.

Those days of raw eggs and margarine from a tub are now long behind Shadwick, who opened Honey Bee's with his wife, Meredith, in June 2020. Still, he can follow the thread of his breakfast food obsession back to those earliest memories, through adolescence and into adulthood, where cooking eggs, bacon, sausage and the many other staples of morning mealtime was a constant. To him, making breakfast was about more than simply throwing together a meal; he was always inspired to put his own spin on things, even if it was simply adding honey and sea salt to Pillsbury Grands canned biscuits.

That little touch made the store-bought brand much better, but it wasn't enough for the Shadwicks. Over the years, Shadwick had developed an outstanding sausage gravy recipe, and the pair felt that they needed a from-scratch option to match its quality. At first, Meredith began experimenting with making her own biscuits for the gravy, but they were not what Shadwick had envisioned. He took her recipe as a starting point, played around for a while, then passed it back to her, where she tweaked it until it was perfect.

The experience underscored just how much Shadwick loved cooking. However, he never thought he'd make a career out of it until a couple of years ago, when he left behind a ten-year career in sales. While he was unemployed for a year and a half, his wife suggested that he look into restaurant work as an option. Shadwick committed to taking the first food gig that came his way, which ended up being a job as an Imo's Pizza delivery driver. Determined to see where the opportunity led, he dove headfirst into the job and realized how much he loved the industry. Nick Imo, who operated the Central West End store where Shadwick was based, recognized his passion and drive and promoted him, eventually taking him under his wing where he learned the ins and outs of the business.

Shadwick got the opportunity to learn even more about the culinary side of the restaurant game after a friend connected him with Michael and Tara Gallina. With no cooking experience outside of Imo's, Shadwick went into an interview for a line cook position at Winslow's Table and got it, thanks to his attitude and work ethic. In just three weeks, he'd fallen into a groove at Winslow's and got the sense that he was finally doing the sort of work he was meant to do. However, the experience was cut short when the pandemic hit town, shuttering Winslow's and flipping the restaurant world on its head.

Though he was disappointed that his run at Winslow's was so brief, Shadwick left there with the confidence to make a career in the restaurant business. After exploring what that would look like, he and Meredith decided to go out on their own and build upon the passion for breakfast food that he'd been cultivating his entire life.

That passion translated into Honey Bee's, which opened as a food stall at the Kirkwood Farmers' Market last summer. Built around his signature honey-glazed biscuits, the outfit enjoyed immediate success, selling out every Saturday it showed up for service. Within three weeks, the Shadwicks knew they had to expand, so they turned Honey Bee's into a truck that launched in February, which has continued to gain a following through regular stints at the Kirkwood Farmers' Market and 9 Mile Garden food truck park, as well as private events.

The Shadwicks still sound shocked by the response to Honey Bee's, though they should not be. You don't even need to take a bite out of one of their biscuits to know it's going to be good — fluffy, golden and gilded with honey, they glisten in the sunlight. However, once you do dig in, you recognize just how extraordinary they are. The shortbread-like exterior gives way to an almost cake-like interior that has a subtle sweetness, underscored by the honey glaze. Then there's the butter, so prominent you can feel it on your hands as you devour this masterpiece. That he and Meredith were ever surprised by the throngs of marketgoers lined up for a taste is comical.

The biscuits are outstanding on their own, but they are also a glorious canvas for Honey Bee's other offerings. As a sandwich, which the pair whimsically refer to as a "sammie," they are filled with peppery scrambled eggs, melted cheddar and bacon that is still glistening with a little grease that soaks into the biscuit's crevices. Shadwick dresses the sandwich with a tangy aioli that brightens the dish.

Shadwick's famous sausage gravy is another excellent option — shockingly creamy and kissed with peppery spice. It's easy to understand why the concoction was a driver for their biscuit-making endeavor in the first place.

Honey Bee's success is not limited to biscuits, however. Shadwick also offers a crustless quiche, which he and Meredith call the "Wakey Wakey Eggy Bakey," a frittata-like casserole of eggs, spinach, cheese and hash browns that is flawlessly seasoned and cooked. Additionally, the pair make rolled and stuffed biscuit "croissants" filled with everything from blueberries and cheese to savory butters. These options, together with the multitude of offerings that show up on their rotating menu (one day they promise to bring back their legendary s'mores-inspired "Campfire Biscuit"), show that there is no limit to their creativity.

While not available on my weekday visits, the pair regularly offer vegetarian gravy made with portobello mushrooms, sweet biscuits in such varieties as chocolate chip and Cinnamon Toast Crunch, warm fruit compotes, and several whipped butters and toppings. "If you can think it, we can biscuit it," they like to say, and with a brick and mortar hopefully on the not-so-distant horizon, it's exciting to watch them turn into one of the area's most thrilling breakfast brands — one that proves how finally following your true calling can lead to great things.