Monday was a violent day in St. Louis. Following an early morning homicide, a group of people gathered that night for a vigil, only to be attacked by an unknown shooter who killed one man and wounded four others. The crime scene was just blocks from the St. Louis Metropolitan Police Department headquarters.

But when police officials convened a press conference in O'Fallon Park less than 24 hours later, the previous night's mass shooting represented only an added item to the planned agenda. Instead, the primary subject of the news conference was a series of "connected homicides" in St. Louis and St. Louis County.

It's a sign of just how quickly gun deaths can accrue in St. Louis. Along with an early-morning homicide in Near North Riverfront neighborhood and another homicide in Walnut Park East, Monday ended with a death toll of four and several more wounded.

At the start of Tuesday's press conference, St. Louis Public Safety Director Dan Isom addressed the Monday night mass shooting at the vigil for Demetrise Thomas. Thomas had been found shot in the torso on the 500 block of North 20th Street around 1 a.m. Monday.

Thomas was 27. The shooting at his vigil claimed the life of 34-year-old Cedric Owens. Two women, both 23, were shot in the head but were still alive. Police described their condition as "critical/unstable" in an incident report. A fourth victim, a 21-year-old man, was shot in the leg.

"Any life taken by violence is a tragedy," Isom told reporters on Tuesday. 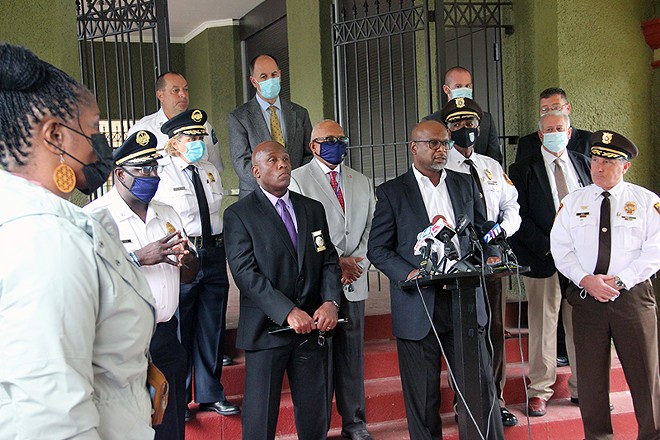 Isom was joined by police officials from both the city and county departments, though they did so to discuss a different set of recent homicides. Starting with the September 13 killing of sixteen-year-old Marnay Hayes in Jennings, police say they have uncovered evidence that has tied together two other killings in the city.

That includes the September 16 slaying of Pamela Abercrombie (she was one of four people killed in the city on a particularly violent Friday) and a third homicide that took place three days later, on September 19, when 24-year-old Casey Ross was shot to death in a vacant lot in the St. Louis Place neighborhood.

Police officials said they could not describe the evidence that had tied the cases together, though Major Shawn Dace, of the city police department, said investigators had found no signs to suggest the killings were gang-related.

Responding to a reporter's question about whether the cases represent "serial" murders, Dace said it was too early to describe the investigation's findings.

"Until we finalize the investigation, we don't want to categorize it that way right now," he said. "At this point, we don’t have a specific person we’re looking into. We’ve just got some evidence that would indicate that the same perpetrator or perpetrators may be involved in these incidents."

City police are asking that anyone with information about the killings to contact the department's homicide division at 314-444-5371. Anonymous tipsters interested in a reward can contact CrimeStoppers at 866-371-8477.