What the Hell Is Delta-8? Tommy Chims Investigates 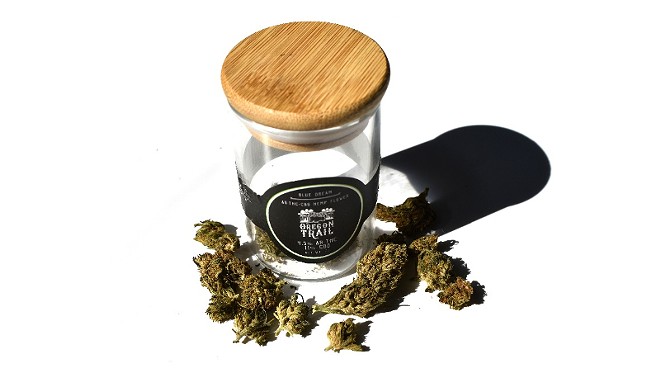 TOMMY CHIMS
Delta-8 is the latest cannabis-industry craze, even as it's currently in a state of legal limbo.

Perhaps you’ve seen the strange set of symbols adorning advertisements slapped up on billboards or promotional signage outside your local purveyor of CBD. A cryptic pairing of a triangle and the number 8, presented with breathless excitement about its availability (exclamation point!), amounts to a veritable hobo code for area stoners unwilling or unable to get a medical card, as well as those without a suitable hookup for some black-market weed.

We’re talking, of course, about delta-8.

A psychoactive cannabinoid derived from cannabis, delta-8-tetrahydrocannabinol, or Δ8-THC, is an isomer of delta-9-tetrahydrocannabinol, weed’s principal psychoactive ingredient, better known simply as THC. In recent years, delta-8 has become a hot topic in cannabis circles, owing to its legal status, with excitement about the substance quickly giving way to a fast-growing subsection of the industry.

Though delta-8 has been studied since as far back as the 1940s, its newfound attention comes through a piece of legislation in the United States. Specifically, the 2018 Farm Bill, which determined that cannabis with less than 0.3 percent THC is legally considered hemp, also removed hemp from the Drug Enforcement Administration’s schedule of controlled substances and determined that anything derived from it is federally legal as well. Since THC is just one of more than 100 total cannabinoids present in the cannabis plant, some enterprising folks in the hemp industry got to work extracting delta-8 and including it in a variety of products for sale on the web, or in a small (but growing) number of brick-and-mortar businesses.

Of course, that’s when things got complicated. In its August 2020 interim final rule, or IFR, the DEA attempted to assert that the substance was still banned, claiming that it is a synthetic cannabinoid and therefore illegal. The Hemp Industries Association hit back with a lawsuit against the federal agency, arguing that the Farm Bill legalized any product derived from hemp, and thereby legalized delta-8. The debate between the two sides rages on, leaving the status of the substance in legal limbo.

But for some, the DEA’s view of the matter was enough, and eighteen states have since banned or restricted delta-8, including such typically weed-friendly locales as Colorado, Illinois and New York. Horror stories from the early to mid-2010s about synthetic cannabinoid-fueled “zombies” smoking themselves into a near-catatonic state via “herbal incense” blends like K2 and Spice only hastened its fast descent from new kid on the block to ne’er-do-well in the eyes of its critics.

But is this concern warranted? And furthermore, is delta-8 even worth all this trouble? At present, Missouri has no laws on the books regarding the cannabinoid, so I picked some up at a local CBD Kratom outpost in an attempt to get to the bottom of things.

Now, it should be noted at this point that I also have more than a passing familiarity with Spice/K2, and could even be regarded as something of an early adopter. Back in 2008/2009, when Spice was first starting to make a splash in the UK, but before it came to the U.S. in the form of K2, I found a seller based in Florida that regularly imported the stuff to the United States and sold it here online. At that time, Spice was being marketed as a powerful herbal blend with a proprietary mixture of plants containing known psychoactive elements that, in tandem, worked to produce effects not unlike those of cannabis. The truth, of course, was far more underhanded: Spice’s manufacturers were blasting research chemicals — in those early days, specifically the synthetic cannabinoid JWH-018 — all over whatever inert plant matter they could find, then selling it as an “herbal incense” to skirt regulations and avoid liability.

As with many who dabbled with Spice, I had spent some time being subjected to regular drug testing, and the fact that this stuff wouldn’t show up on those was enough to make me (foolishly) overlook its unknowns. It was also the first fake weed I’d ever found that actually produced any effects other than tasting like shit and making me cough a lot (which, to be fair, it also did). I distinctly remember taking a hit off of a particularly potent batch once and waking up a minute or so later on the ground, my mind completely and utterly fried — I’d somehow fainted as a result of a so-called herbal blend. That was enough to make me rethink the stuff, and by the time the revelations came out that it’d just been research chemicals the whole time, I’d long since made the move back to good old-fashioned weed.

As the government acted to ban JWH-018, Spice’s manufacturers moved on to other synthetic cannabinoids brewed up in underground Chinese labs, resulting essentially in a game of research chemical whack-a-mole. This also led to the products becoming even more dangerous, with consumers wholly unaware what they were ingesting, let alone what proper dosage might look like. Soon, those zombies we heard the horror stories about were walking the streets among us.

K2/Spice largely fell out of favor as a result of the crackdown and negative press — and with good reason, considering it’s terribly dangerous stuff — and the well-earned stigma against synthetic cannabinoids lingers, bringing us to today’s delta-8 legal limbo, inexact though the comparison may technically be.

I purchased a quarter of Oregon Trail-branded delta-8 hemp flower, sold in a little glass jar and marked as Blue Dream, for $54.62 after taxes. The employee at the store told me that, unlike the regular, sativa-leaning Blue Dream cannabis I’m accustomed to, the delta-8 version would have more indica-like effects. This variation of the stuff is rated at 4.5 percent delta-8-THC and 11 percent cannabigerol (CBG), another cannabinoid derived from hemp that he explained would together result in a more relaxing body high.

The dark-green buds in the jar mostly looked like some kind of bizarro weed — it resembled the cannabis I’m used to more than it resembled anything else, but there was still something just a little off about it. The buds had little crystals throughout, but these didn’t shine or sparkle like I’d usually expect, instead appearing more dull and pale. Upon opening the jar I was met with a fruity smell, like candy, as well as some grassiness. On breakup it was exceptionally dry, with the consistency of hay, and it crumbled easily to dust in my fingers. On inhale it had something of a sour bud taste to it that wasn’t particularly enjoyable, but which I marked in my notes tasted “better than something that shouldn’t be smoked” at least (Spice, I’m looking at you).

As for effects, this stuff is nothing like Spice at all. Spice was madness; here we have a very relaxed high that borders on drowsiness, like you’re trying to read a book but having trouble keeping your eyes open. I felt clear-headed, but my body was buzzing and my limbs were heavy — this stuff is definitely best suited as a nighttime smoke. Further, delta-8 has a reputation for being a better option for people who find regular cannabis to be somewhat overwhelming, imparting some of its enjoyable effects without being debilitating, and I found that this reputation is well earned. And unlike certain “incense blends,” this stuff is actually marked for consumption, which seems a good sign to say the least.

Put plainly, if you’re a high-tolerance smoker, delta-8 will probably leave you wanting. But if you’re less experienced, or simply looking for a much more muted high, this might be the stuff for you. Get it while you can.