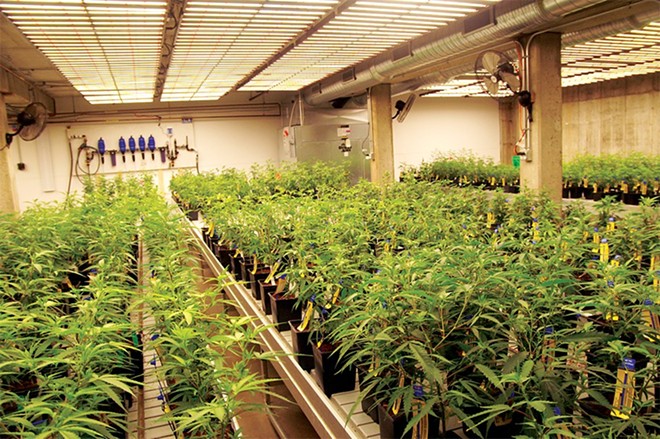 LEAH SHAFFER
If you're hoping to grow or sell medical marijuana in the state of Missouri, you first must receive a license. But some are calling foul about the process.

A company hired by Missouri officials to help review applications for the state's medical marijuana program has been ordered to pay $28 million to one of the applicants it rejected.

Wise Health Solutions, a joint venture between Oakland, California's Oaksterdam University and Nevada-based regulatory compliance company Veracious Investigative, was awarded a contract by the Missouri Department of Health and Senior Services in August 2019. According to a press release from the company at that time, its purpose was to "review applications for prospective medical cannabis businesses, in anticipation of Missouri's burgeoning medical cannabis industry."

But, as the St. Louis Post-Dispatch reports, the heads of at least one company that was passed over for a license believe that the process was unfair. St. Charles-based GMT Consulting, one of many groups who applied to be a part of the state's medical marijuana industry, leveled a lawsuit against Wise Health Solutions, asserting that its methodology in scoring potential participants was flawed, even going so far as to accuse the company of corruption.

The case wound its way into arbitration, and GMT prevailed. The arbitrator determined that Wise Health Solutions “negligently performed its consulting duties for DHSS, which caused GMT Consulting, LLC to be wrongfully denied dispensary licenses.” The decision was approved by a Buchanan County judge in July. It awarded $28 million to GMT, which is now trying to collect.  The company is asking a Cole County court to compel Wise's insurance company, Hiscox Insurance Co., to pay up.

Wise Health's role in Missouri's medical marijuana program consisted of providing for-profit "boot camps" to interested applicants through its affiliated and unaccredited weed school Oaksterdam University. Then the company used a blind process to score those and other applicants before providing its findings to the DHSS for review.

At issue, though, is the fact that some believe Oaksterdam's coaching may have provided the applicants who attended its "boot camps" with certain keywords and phrases that may have influenced scorers to give them preferential treatment.

It's not the first time Wise Health has faced allegations of impropriety in a regulatory setting. A 156-page white paper published in 2020 by the Cannabis Consumer Coalition about Missouri's confusing medical marijuana licensing process details multiple instances in which the group claims Wise Health misrepresented itself, as well as multiple potential conflicts of interest among its employees.

One portion of the report highlights Wise Health's own August 2019 press release announcing its partnership with the Missouri DHSS. The release touts the company's role in assisting with the implementation of cannabis licenses in Nevada and Arkansas.

"With expert practitioners from both sides of the regulatory field and a successful history of scoring applications in Nevada and Arkansas, Wise Health Solutions anticipates reviewing and scoring license applications to open cultivation and manufacturing facilities, testing labs, and dispensaries," the statement reads.

But according to the Cannabis Consumer Coalition's report, this was a misrepresentation of the facts. In one instance, the report notes a piece written by Geoffrey Lawrence for the Reason Foundation, which points out that Nevada's licensing implementation was beset with controversy that was glossed over in the press release. In fact, Clark County District Court Judge Elizabeth Gonzalez ruled in an August 2019 court order that Nevada's licensing agency "acted beyond the scope of its authority," taking actions she found to be "arbitrary and capricious," amounting to "conduct that is a serious issue."

"The voter-approved initiative required the process to be 'impartial and numerically scored,'" Lawrence wrote. "However, the regulations contained scoring criteria that demonstrated bias toward some applicants."

"The controversy in Nevada is almost identical to the allegations and issues that have been raised in Missouri’s marijuana program," asserts the white paper. "Arbitrary and capricious scoring of applications, questions about conflict of interest and privileged access to regulators by representatives of winning licensees, and market allocation and collusion by winning licensees."

As for Arkansas, the Cannabis Consumer Coalition asserts that the state dealt with similar problems, including allegations of conflicts of interest and bias bordering on corruption. The odd thing in this instance, though, is that the group could find no evidence in the public record that the Wise Health-affiliated company Veracious was involved in any part of the process whatsoever, despite claims to the contrary in the resume its owner submitted to the state.

"The resume of [Veracious owner] Chad Westom submitted to the MO DHSS as part of the Wise Health Solutions scoring vendor bid claims that Veracious was part of the review team for Arkansas’s dispensary license applications," the report reads. "However, no public record that we could find confirms this."

Despite the considerable controversy, Missouri Governor Mike Parson's office doesn't believe the $28 million judgment against Wise Health reflects poorly on the state. “While DHSS was not involved in that matter, the issue appears to be a terms dispute with an insurance company and a non-execution agreement, not a decision by a court on the merits of scoring,” DHSS spokeswoman Lisa Cox tells the Post-Dispatch.

The Missouri Medical Cannabis Trade Association similarly downplayed the case and its impact on the state's medical marijuana program. “This litigation between two private parties doesn’t include the state and will have zero impact on Missouri’s more than 150,000 medical cannabis patients, our industry, or Missouri’s program,” the group said in a statement.

We've reached out to a representative from Wise Health for comment. We will update this story if we hear back.