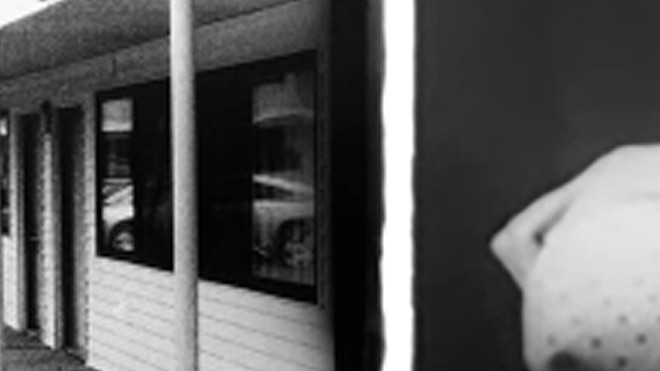 FROM BOB REUTERS PHOTOS
Welcome to the Eleventh Hour.

Welcome welcome to this occasional column, this little room I've set aside for us, where we get to trade rumors about the STL art and music world. As you know, this city is full of brilliant songs, gnarly instruments, lifer artists, legendary venues and all the brick-city stubbornness that keeps the city's creative lifeblood flowing, even if and when everything suddenly shuts down for a year and more.

Note: There is no journalistic distance in this column. A lot of these people are friends and all of them are colleagues — anyone who plays music and makes art in this city is a colleague. I play drums and make posters (along with my partner and probable column contributor Paige Brubeck), buy records, read books and magazines, hang out at bars and venues and theaters and galleries, have opinions and love finding out about cool shit. The good news: All this shit is cool.

We'll start with the very most important news:

GET HAUNTED: Bob Reuter's Alley Ghost is the vengeful, gleeful spirit of the unstoppable Bob Reuter himself, now four years gone but still spitting out the classics thanks to his band — Brice and Kristo Baricevic, Mat Wilson, Bassamp and co. tearing through the songs that Bob made in all of his various bands. They just this week released TWELVE NEW RECORDINGS of Bob's songs on Bandcamp, songs they perfected by touring together for months. Brice's take on Bob's yelping roar is uncanny, as is Ryan Koenig's version of Bob on "Marie." Consider this CRUCIAL INFO and get yrself to their bandcamp right now to start listenin' to "You Belong to Me," the eternal sacred devilish sound of south-city St. Louis.

ALIGHT IN THE DARK: You know the St. Louis International Film Fest is happening right now, with full proof of vax and a few sensible rules (no eating, etc.) that should actually help keep you safe enough to enjoy the movie? Two highlights among many are some STL ex-pats made good. Leanna Kaiser, formerly of Frances With Wolves and STL, currently post-film school in LA, has an award-winning experimental short ("Babes in the Woods") in the fest, as does STL-to-NYC actor Pete Winfrey ("All Gone Wrong"). And there's even "Maxi," Zia Nizami's documentary about our city's own fair-haired, blueskinned, tricoastal fairy demon, Maxi Glamour! Tbh, by the time you're reading this you probably missed the SLIFF screenings, but you can still track down these shorts online, and you should. (I've so much gossip about ALL of those folx, but I'll have to save it for another column — remind me to tell you, yeah?)

FUCKIN HOT TEA: River Kittens just released a new video before heading out on tour supporting Samantha Fish and the Allman Betts Band on the Allman Family Revival tour. It's been a freakin' huge year for the Kittens, a.k.a. Allie Vogler and Mattie Schell, who've spent the last decade busting their musical tails while bussing tables — a day job now immortalized in the video for "Dressing on the Side," which they re-recorded for their new album, Soaking Wet, that came out on Devon Allman's Create Records label early this year. The song is a dead funny recounting of the shit you do at restaurants that drives the wait staff crazy, and the video, shot at the Fountain on Locust, is spot on, with some priceless cameos to boot. What up Big T!

WHERE WE STAND: Have you seen the Burney Sisters' new hair colors? You really should. We did a story on them when they were just getting started in the region, and they've been working hard ever since. Olivia and Emma's youngest sister, Bella, was barely in the band back then — and now they're a polished, road-tested-but-never-weary powerhouse vocal trio with a stage presence as honed as their harmonies. They just announced a spot at the Folk Alliance International Fest in 2022, and if I were a bettin' person (I try not to be) I would put my chips on these three. I recommend their version of Brandi Carlisle's "Right on Time (In Harmony)," though they've got plenty of their own songs to check out as well.

More to come, stay tuned! And if you've got tips/thoughts/tea for me, find me at [email protected]. Tell me what's up with you, your band, your friend's play, that show you saw and so on. Cheers, peers!