When James Bommarito ticks off the list of things his dad, Vince, pioneered in the St. Louis restaurant scene, it stops you in your tracks. Tableside service, wine lists, valet parking, crumbers, wine glasses preset on tables, closing on Mondays — so many facets of the way St. Louisans dine out that are taken for granted as "just the way it is" can be traced back to his father's innovations. Even the baked potato.

"We were the first restaurant that brought the baked potato to St. Louis," Bommarito says. "He couldn't get anyone to eat it because people thought sour cream and chives wouldn't be to their liking. Eventually, he changed the name to crema and chives so people would try it, and it worked."

The details of fine dining aside, there is no denying the broad impact the late Vince Bommarito and his iconic restaurant, Tony's, had — and continues to have — on St. Louis dining. The gold standard against which all other restaurants are judged, Tony's has become shorthand for food and beverage elegance, occupying a special place in the hearts and minds of St. Louis diners in a way that no other restaurant does. With international acclaim and numerous accolades under its belt, including the Mobil 5 Star and AAA Four Diamond Awards, it's taken for granted that Tony's always was, is and will continue to be the city's undisputed beacon of fine-dining.

If there's one person who doesn't take Tony's status for granted, it's James Bommarito. Now captain of the storied ship, Bommarito is in charge not only of the restaurant's day-to-day operations but of his father's legacy. It's a duty he does not take lightly, considering how hard his dad worked to create such a world-class property from its roots as a humble spaghetti house, beginning when he was just a teenager. 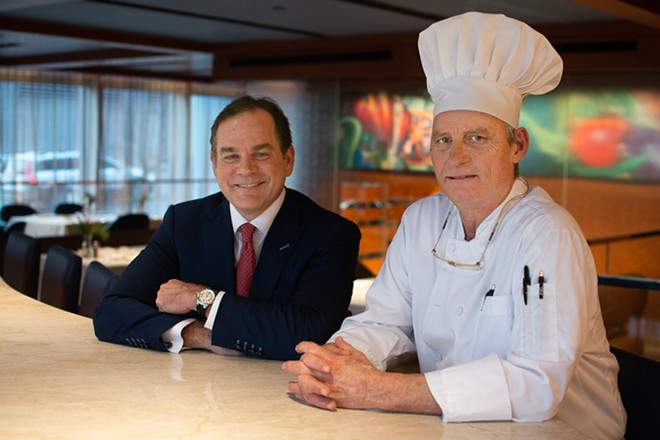 "Really, this all started in 1949," Bommarito says. "My grandfather had passed away, and my dad had to look for something to do for a living. My grandfather had owned this building that had a kitchen in it, but it was more of a billiards room and cigar shop. My dad didn't really want to do that, so he asked his mother if he could open a restaurant. She was a little reluctant at first and was going to sell the building, but he managed to talk her into it."

At the time, the elder Bommarito was a senior at St. Louis University High School, so he enlisted the help of his aunts and uncles to run the restaurant during its breakfast and lunch service while he worked with his teachers to get his schoolwork done by noon. This went on for about six months until he graduated and went into the business full time. Even at that young age, and without experience in the hospitality industry, Vince had big dreams of having the finest Italian restaurant in town, so he traveled around the city, and eventually the country, visiting restaurants that were better than his and picking up ideas on how he could improve.

Over time, those experiences helped him elevate Tony's from a red-and-white-checkered-tablecloth breakfast, lunch and dinner spot called Tony's Spaghetti House into an increasingly elegant, high-end evening affair. He eventually renamed the restaurant Tony's Steak House to reflect the change, and ultimately dropped the latter part to simply Tony's, a name he felt reflected a more formal experience. By the 1960s — due in part to the restaurant receiving a prestigious award — his dream of having the best restaurant in the city was coming true.

"It was a struggle for him," Bommarito says. "Getting started and not knowing anything about the business and learning the hard way was difficult, but he was totally dedicated and had a vision to have the best restaurant in St. Louis. Sooner than later, he had the best Italian restaurant in the entire U.S. and one of the best in the world. He had this intense pride and was going to do whatever it took to be the best."

ANDY PAULISSEN
For more than 70 years, Tony's has set the standard for fine dining in St. Louis.

Bommarito inherited that drive from his father. Though he always understood that Tony's was part of his birthright, he did not set out to get into the restaurant business. Instead, after going away to college at Rice University in Houston, he got a job with Anheuser-Busch, working in New York City and Los Angeles. When his family took over food and beverage operations at the then Savvis Center and Trans World Dome, his dad asked him to come back to help out with the business. He hasn't left since.

Now the only remaining namesake left running the restaurant (his brother, Vince Jr., left a few years ago to get into another business), Bommarito feels the weight of the restaurant on his shoulders every night. This has been especially heavy for the last few years, when he began thinking seriously about moving the restaurant from its downtown home on Market Street to a new location.

"I had a lot of sleepless nights when this opportunity surfaced," Bommarito says. "I knew we needed to move, but I didn't know what to do. I'd been to so many places around the U.S. and came up with a lot of ideas, but I didn't know if the rest of St. Louis would like them. I was extremely nervous about our transfer to Clayton. I knew what we were doing would be very cool, but I had no idea if anyone else would like it."

The news that Tony's was relocating to Clayton may have initially been greeted with shock, but as soon as diners got to see the stunning new digs, they breathed a sigh of relief. Not only was Bommarito able to translate the Tony's experience in the new location, he may have even improved it. With its chic main dining room, mezzanine bar and enclosed and heated outdoor patio, the new restaurant acts like three different properties under one roof. Still, what makes Tony's Tony's — the service, the food, the ambiance — remains fundamentally the same.

"We try to satisfy as many senses for guests as we can," Bommarito says. "I think when you can do that, it creates a much more pleasant experience for our guests. I truly believe that if there are two restaurants — restaurant A and restaurant B — and they have the exact same food but the other items in restaurant A, like the service, ambiance and how well the restrooms and floors were maintained, are better than those in restaurant B, people will swear restaurant A has the better food."

Providing hospitality at that level, day in and day out, is a commitment, Bommarito says, and it requires him and his staff to never be off their game, even for a moment. Though he understands the mystique of Tony's that lives in the minds of St. Louisans — even ones that have never dined at the restaurant — he does not feel that he can rest on that reputation. Instead, occupying such a prominent place in the pantheon of great restaurants carries with it the responsibility of exceeding those expectations. When he sees the smiles on his guests' faces and hears the compliments as they walk out the door, it lets him know he's doing something right and fills him with pride, both for what his father was able to achieve and what the restaurant continues to achieve under his watch.

"We don't take anything for granted," Bommarito says. "We start over every day in this business, and the people who come through this door tonight don't care about what happened last night. They are the only reason we are here, and it's important to remember that. I get a little nervous every night before work, but if I didn't, I'd think something was wrong. My main objective is to exceed every person's expectations that comes through that front door, and if I don't, I take it personally. I have butterflies every day that I come to work."