Licorice Pizza Is Braless, Lawless but Far from Flawless 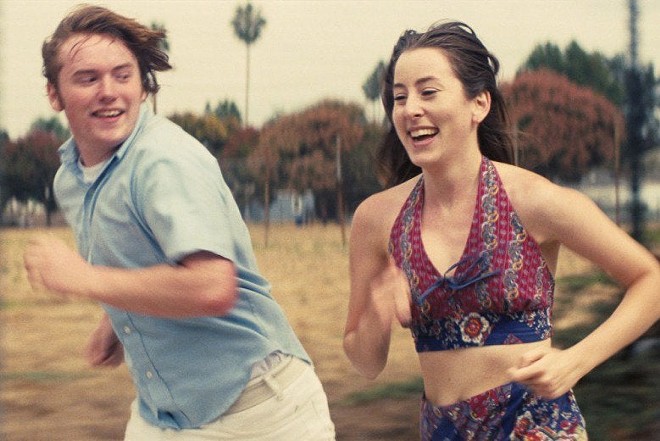 Like a shot of sunshine on a cold, COVID-wary afternoon, Licorice Pizza looks to be one of the most acclaimed films of the season — keeping open the doors of more than a few arthouse cinemas, at least for another few weeks (God willing). This, in and of itself, feels cause for celebration. But is the actual movie actually…good? Named for a landmark SoCal record store — which, perhaps meaningfully, never shows up in the film — Paul Thomas Anderson’s latest would seem to celebrate the freewheeling spirit of the San Fernando Valley in the early ‘70s, a time when skirts were short, bras were optional and grass was as plentiful as gas was not. But while the nostalgia trip (trap?) assuredly offers an array of great music, outfits and petrol-guzzling automobiles, as a coming-of-age love story between a young man and a (much less) young woman, Licorice Pizza leaves a bit of a bitter taste.

The film chronicles an unconventional friendship between Alana Kane (Alana Haim), a listless 25-year-old who lives with her parents and older sisters in Encino (her real-life family, the siblings of which comprise the HAIM pop trio), and Gary Valentine (Cooper Hoffman, son to the late Philip Seymour), an enterprising high-schooler and self-described “showman” who at fifteen boasts a modest degree of renown as a child actor. “So what’s your name,” Gary badgers Alana, one of many photographer assistants working his school portrait today. “Are you asking me out?” she asks, incredulously. “I’m not going to go on a date with you, kid.”

But Gary is relentless, and Alana relents, joining him not only for an acutely cringey dinner at the local “Tail O’ the Cock” (a Valley landmark), but as chaperone for a trip to New York for a television promo. At this point, her interest in Gary seems somewhat plausible; she’s flattered by his attention, has little going on in her own life, and the lure of show biz, however small-scale, makes for a cheap temporary thrill. What makes a lot less sense is how, after his auditions dry up, Gary lassoes Alana into a series of ventures that span across a number of years. Whether schilling “Fat Bernie’s” waterbeds or newly legal pinball machines, the two “business partners” maintain what seems a simultaneously flirty and antagonistic platonic relationship, joined by a ragtag troupe of teens and tweens, all of them male, and all of them inexplicably never in school for the majority of the movie. Plot holes abound, as though we’re all supposed to throw up our hands and say, “Whelp! It was the ‘70s!”

It would be one thing if Alana chose to romp around with a gangly brood of teenage boys for a late-night jolt or summer lark. But socializing with those ten-plus years younger for years at a time? Twenty-five-year-old women, however insecure, underachieving, impulsive, or aesthetically disadvantaged (which, to be sure, Haim, twelve years senior to Hoffman, is not), do not tend to congregate around high school boys; they do not join them in spontaneous business schemes, kowtow to their sophomoric imperatives or flash their boobs to appease a blemished baby face. And even if a 25-year-old woman somehow did feel compelled to surround herself with a pack of adolescent hustlers, certainly her older sisters would not support it.

In this case, simply reversing the gender script from older man to older woman does not make it progressive, even if initially, it feels less sexist. “You’ve come a long way, baby,” declares the bust of Alana’s tight cotton tee, a reference to the classic Virginia Slims slogan. But over the course of this two-hour-plus film, it’s remarkable how her character goes pretty much nowhere; she, like Gary, does not evolve as a character; she, like Gary, moves from one caper to the next without ever growing as a person. In a lot of ways, the Valley itself is the most compelling character onscreen because it changes. Laws and mores evolve, businesses open and close, oil prices skyrocket.

One thing that is wholly delightful about Licorice Pizza is the sheer volume of attractive, yet imperfect-looking people onscreen: Crooked teeth, neck acne and leg jiggle abound, and it’s wonderful, especially in an age where practically anyone in a major motion picture looks like they could be a beauty brand ambassador. The number of scenes involving unathletic running across the sidewalks and streets of the Valley are so exuberant that they are arguably worth the cost of admission.

Anderson has long thrived on building a movie narrative out of the premise that two broken people being broken together is basically the best we can hope for. But as a whole, Licorice Pizza feels like a lazy mashup of Wes Anderson’s 1998 Rushmore, Cameron Crowe’s 2000 Almost Famous, and Paul Thomas Anderson’s own 2002 Punch Drunk Love. If culture recycles every twenty years, it would make sense that suddenly, each of these films feel relevant again.

Far be it from me to tell anyone not to enjoy this film. It’s natural to lust for the freedom of youth — even more so in a time when adulthood literally means being somewhat locked down indoors. But if you, like me, found a slice of Licorice Pizza ultimately less appetizing than the critics have made it, you are not alone.