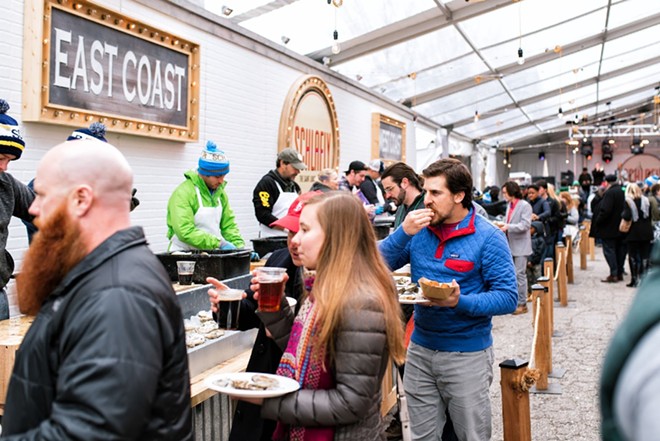 Courtesy Schlafly
Slurp some oysters next month with Schlafly.

Shuck yeah, Schlafly is bringing back their Stout and Oyster Festival in March.

Two years have passed since the last Stout and Oyster Fest, and this year the festival will kick off on March 25 and 26 at the Schlafly Tap Room (2100 Locust Street, 314-241-2337). With fifteen stouts being brewed specifically for the event and over 80,000 oysters being flown in overnight from both coasts, the event is the largest of its kind in the Midwest.

“We could not be more excited to welcome guests back for our most popular beer festival of the year,” Schlafly CEO Fran Caradonna says in a press release.

In attendance will be 25 “star shuckers,” oyster farmers from across the continent, who will be shucking oysters all weekend long. East Coast and West Coast shuckers each will offer three varieties of raw oysters at each of three raw bars, both inside the Tap Room and outside in the “Shuckerdome.”

A battle of the coasts will also take place with a Shuck Off, featuring East versus West versus Mid-Coasts duking it out in a relay-style race where three shuckers from each coast must shuck and slurp an oyster, then chug a stout. The one with the fastest time will be crowned the winner.