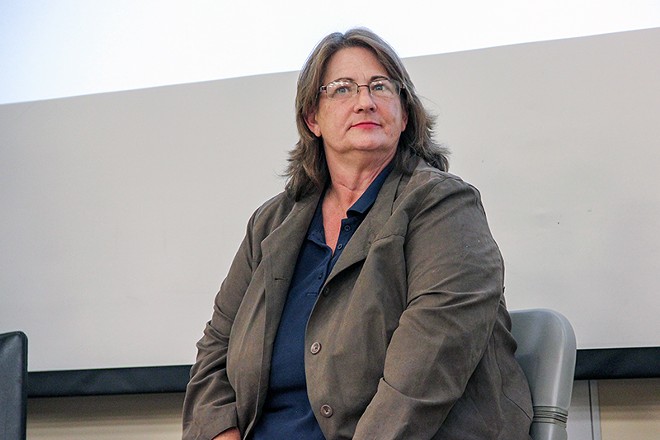 DANNY WICENTOWSKI
Boone County Republican Rep. Cheri Toalson-Reisch.
A recent proposed amendment sought to improve Missouri's harsh drug sentencing laws. However, because of a clerical error, the amendment was mistakenly deleted right before Missouri lawmakers voted to approve the bill it was attached to.

The mistake was supposed to be rectified in 2022, but now the lawmaker behind the proposal says there will be no second attempt to pass it in this year's legislative session. The decision means there is no chance to restore parole eligibility for certain drug offenders sentenced under a repealed law that no longer exists.

The proposed amendment to restore parole eligibility targeted a segment of the imprisoned men and women barred from parole because they are designated "prior and persistent" drug offenders. Created by a 1989 law, the label forced judges to issue mandatory prison sentences ranging from ten years to life — without distinction for nonviolent offenders or those convicted solely for dealing and possessing relatively small amounts of marijuana.

The harsh sentencing law was repealed in 2017, but the action wasn't retroactive. That's where the proposed amendment, drafted in 2021 by Republican state representative Cheri Toalson-Reisch, came in: It sought to restore the parole eligibility to some offenders convicted of drug trafficking prior to the reforms.

The proposal became an amendment on a Senate bill, but, on the final day of the 2021 legislative session, a Senate drafter removed the amendment from the bill. The bill was then voted through the Senate and sent to the governor's desk. The mistake went undiscovered for days, shocking even its author, Toalson-Reisch, who had initially told the Riverfront Times that the measure had been approved with the bill, only to late clarify that, in fact, it had not.

Afterward, Toalson-Reisch had vowed to refile the proposal in the next legislative session. That won't be happening, the lawmaker says now.

"I am not filing it at this time," she said, though she added that she's "looking more into it" and that a similar proposal "might possibly become an amendment on some topic-related bill" in the future.

"I'm not done," she said. "I'm still working behind the scenes."

Toalson-Reisch explained that her original 2021 proposal had been drafted with input from the Missouri Department of Corrections, which produced an analysis of the possible impact on the prison population. Under the proposed reform, "prior and persistent" offenders convicted of first-degree and second-degree drug trafficking would become eligible for parole after ten years, which is still an extremely long sentence when compared to similar cases: Prison data for 2020 show Missouri released more than 600 drug offenders convicted of the same severity of crime — Class A and Class B felonies — with more than 90 percent of those releases coming through parole.

Toalson-Reisch said her proposal's limited scope was arrived at through guidance from MODOC officials. While data obtained previously by RFT lists more than 200 people serving prison sentences as "prior and persistent" offenders, Toalson-Reisch's fix would have impacted just 35 cases, according to the MODOC analysis.

After the bungling of the 2021 effort, Toalson-Reisch said that her discussions with the department took a different path as she prepared for the 2022 session. This time, the department advised her that the bill was no longer needed because most of the offenders from the previous analysis are already on the path to release.

In an email, MODOC spokeswoman Karen Pojman confirmed that the department had worked with Toalson-Reisch on drafting the 2021 bill. The department asserts the bill would fix a problem that's already been largely resolved.

"At this point," Pojman wrote, "it does appear that the majority of the offenders who would have been affected by this legislation when it initially was proposed already have been released and/or have release dates."

Indeed, of the 35 offenders who would have been impacted by the 2021 bill, eight already served at least ten years in prison and qualified for parole hearings last year. Pojman pointed out that other drug offenders identified by MODOC analysis have gone on to receive commutations from Parson and were released through parole that way.

However, the analysis supplied by MODOC on Toalson-Reisch's legislation suggests that many, if not most, of the 35 cases identified would still benefit from it: The department's analysis shows that 26 drug offenders will not be parole eligible until after 2023, and ten of those won't qualify to see a parole board until after 2027. One will have to wait all the way until 2031.

Additionally, while it is true that Parson's commutations have similarly targeted "prior and persistent" offenders, the numbers don't seem to account for a majority of the 35 offenders who would have become eligible for parole under Toalson-Reisch's 2021 proposal. MODOC's analysis of her legislation was submitted in February 2021; since then, only three of Parson's clemencies have involved convictions for drug trafficking.

The upshot is that the vast majority of people serving prison sentences as "prior and persistent" offenders are stuck with outdated punishments. Without the chance for parole, those who would have benefited from Toalson-Reisch's amendment are trapped in substantially longer punishments than those convicted of drug trafficking today, with some still facing more than a decade behind bars before parole is an option.

At the same time, sentencing reforms that went into effect in 2017 — including the repeal of the "prior and persistent" law — have made Missouri more reliant on non-prison punishments than ever. Pojman acknowledged as much in her email, writing that the 2017 changes "affected both the incarceration rate and the number of releases" from Missouri prisons.

The result, she wrote, is that "people are now being sentenced to probation instead of incarceration for many nonviolent crimes that would carry shorter sentences."

For Missouri prisons, that means a larger proportion of the population is "made up of people who have committed more serious crimes, such as violent crimes, child abuse and sex offenses," she concluded.

But for Missouri's "prior and persistent" drug offenders, nothing has changed.