A multitude of dogs runs around off-leash and chase after each other and tennis balls. Not far away, their humans sit back, conversing with friends and family while having a cool drink. On an outdoor patio, humans and dogs alike treat themselves to a freshly made meal. This is the normal weekend atmosphere of Bar K (4565 McRee Avenue, 314-530-9990), according to cofounder Leib Dodell.

“A lot of dogs, especially dogs living in urban environments, they don't always get to do the things that dogs love to do, which is run and jump and engage and sniff,” Dodell says. “We give them that little oasis in the middle of a city to be dogs, and we allow people to be part of that experience. So, when this place is full and humming and there's music on the stage, the energy in here it’s like nothing I've ever seen.” 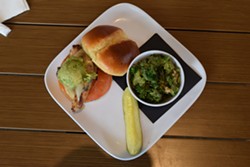 CASSIDY WAIGAND
Bar K offers freshly made items on its menu, such as the Chicken Avocado Sandwich and the Roasted Broccoli with Cranberries and Feta.

Bar K restaurant and dog park is located in the city's Botanical Heights neighborhood. With a 2-acre outdoor dog park, a 10,000 square foot indoor dog park, three bar areas and a dog day camp, Dodell says the concept behind Bar K is to “let our dogs enjoy the experience of going to a bar and restaurant.”

The St. Louis location opened on Nov. 19, 2021, roughly four years after Dodell and cofounder Dave Hensley started the first Bar K Lab pop-up in Kansas City, Missouri. For Dodell, the goal of Bar K is to connect people, dogs and the community while providing great food and drink.

Describing the menu as “healthy casual,” Dodell says Bar K serves freshly made food that incorporates local ingredients. These include dishes such as the "Chicken Avocado Sandwich," which serves a freshly grilled herb marinated chicken, topped with avocado, tomato and pepper jack cheese on a soft potato bun. Vegan and vegetarian options are also available, including the "Roasted Broccoli with Cranberries and Feta."

“There's just lots of different options for people that want to be purposeful about how they eat. And same thing with the bar menu. There's twenty tap handles up, and most of them are locally brewed beers,” Dodell says.

CASSIDY WAIGAND
Ruby Rose tries a "Doggie Flight" as George Graff and Lisa Wardein sit outside on Bar K's patio.
The menu does not only cater to its human patrons, however. Dodell says Bar K’s cooks work with nutritionists from Purina to offer healthy and tasty menu items for dogs. For his dogs, the "Turkey and Sweet Potato Meatballs" are a favorite. Another staple is the “Doggie Flights” – which allows dogs to sample three entrees of their choice.

Bar K’s space is designed for dogs to enjoy, with its multiple dog parks and dog-based events like Doga – dog-friendly yoga – and adoption events. However, Dodell says people do not have to bring a dog to visit. He says some people chose to come without their canine companion the first time to see if Bar K seems like a good fit for them.

For people who do want to bring their dogs for a visit, Dodell says Bar K offers entry and membership options for everyone. He says day passes, which start at $10, are good for people who live further away or may not visit as often. Bar K also offers annual and monthly membership passes.

“From the very beginning, we were ambitious about this. We thought that every city should have a Bar K,” Dodell says. “That people and dogs need these kinds of joyful spaces now more than ever just to have a space - kind of a throwback space - where nobody's on their phones [and] everybody’s engaging with each other over our common love of dogs in this very authentic space.”

Dodell and Hensley began in Kansas City, Missouri with a Bar K Lab pop-up in January 2017. Neither had worked previously in the restaurant or pet industry. Dodell says they were just two dog owners who noticed an opportunity to improve upon the dog park experience.

“When you have no preconceived ideas about what something should look like, it frees you up to be creative and not assume that things are the way they are because they’re always that way,” Dodell says. “Sometimes things just haven't happened because nobody did it yet.”

Dodell says the main goal was to create a welcoming environment people would go to with their dogs, and his goal quickly became a reality. The pop-up location, which was hosted in a warehouse on weekends and some weeknights, often hit its 50-person capacity, according to Dodell. He says Bar K had 800 members before the permanent location, which opened in August 2018, was completed. 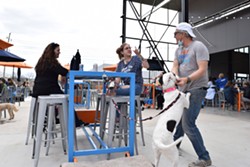 CASSIDY WAIGAND
Leib Dodell, pictured right, pets Lainie while speaking to Kristine Larkin, middle, and Yvonne Ziegel, right.
According to Dodell, the Bar K in St. Louis has been just as successful. He says in the months since the restaurant opened, it has gained as many members as the Bar K in Kansas City, Missouri did in three and a half years. The St. Louis location also offers “Stay at Bar K,” which offers dog daycare, training and grooming.

Looking toward the future, Dodell and Hensly are working to open a Bar K location in Oklahoma. Dodell says the goal of Bar K is to be located in 10 cities within five years. He believes the St. Louis location is going to continue to thrive and encourages everyone to check out Bar K for themselves and their furry companions.

“We've created a space that we think dogs and people equally enjoy,” Dodell says. “That's really one of the great things about this concept. For me, the best thing about being here is watching the smiles on everyone's faces - the dogs and the people.”