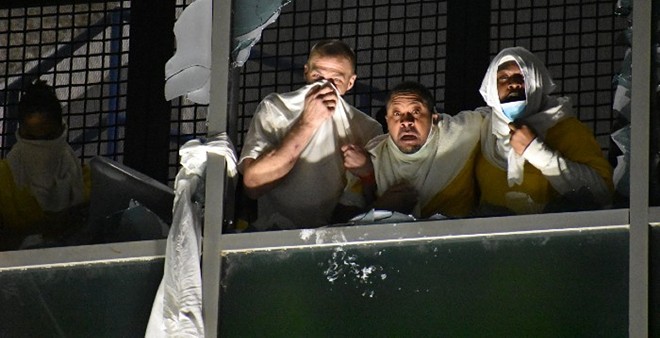 DOYLE MURPHY
Inmates appear to react to a chemical irritant at the St. Louis City Justice Center during an uprising in April 2021.

Today in federal court, lawyers with four legal nonprofits requested that a current lawsuit against the city and nine corrections employees be expanded into a class action lawsuit. They say the move is necessary both because of the scope of the problems at the City Justice Center and the City Counselor’s office’s “obstructionist” tactics.

“I personally have never encountered anything so blatantly obstructive,” said Shubra Ohri, an attorney with the Missouri office of the MacArthur Justice Center. “The city is just refusing to give us even basic information, like video footage, or use of force records or even policy that we're seeking.”

The original lawsuit was filed in May 2021 on behalf of three inmates in the CJC who said they were maced for no reason and with no warning. One of the plaintiffs, Derrick Jones, claimed he was put in a cell to “marinate” in the mace.

“Frankly, I think if the city were not being so obstructionist, this lawsuit could, as was originally planned, move pretty quickly,” said Maureen Hanlon, a staff attorney with ArchCity Defenders. She said that she worried that absent class action status, the original plaintiffs would be released from the CJC, at which point “the court might think, oh, well, you're gone now. So what's the problem?”

Ohri and Hanlon say that because the City Counselor’s office has blocked their ability to gather more information about the CJC, their organizations went about collecting it themselves via direct interviews with inmates. The lawyers say these interviews provided an “influx of information” about conditions in the CJC that they say proves the case warrants class action status.

Declarations given by 38 men who are current or recent detainees at the CJC were included in today’s filings. Multiple detainees describe being maced while in handcuffs. Another says he was maced for not wanting to go into a cell where there was a puddle of urine on the ground. One detainee who signed a declaration said he arrived at the CJC over a year ago, when he was 17, and has been maced three times while there. He has also been left in his cell for up to two weeks at a time. Many detainees at the CJC are awaiting trial and have not yet been convicted of the crime they’re being held for.

This is not the first time the City Counselor's office has come under fire in recent weeks. Politicians at the city, state and federal level criticized City Counselor Sheena Hamilton for defending officers accused of assaulting protesters in the wake of the 2017 Jason Stockley verdict.

At a March 7 press conference the Reverend Darryl Gray expressed concern that Hamilton’s office was trying to establish a precedent that would extend protections given to police officers accused of violating someone’s rights.

“We know that the bar is already set so high that it is almost impossible to prosecute rogue police officers,” Gray said. “We understand the implications of what the city counselor is doing, not just in St. Louis.”

“Their argument is that pepper spraying or macing someone shouldn't count as a constitutional violation,” Hanlon said. “That it is de minimis, or trivial, force.”

Saint Louis University School of Law Clinics and Rights Behind Bars are also representing the plaintiffs in this case.

Nick Dunne, spokesperson for Mayor Tishaura Jones's office, told the RFT, "While we cannot comment on pending litigation, Mayor Jones’ administration has worked with the Board of Aldermen to establish the City’s first-ever Detention Facilities Oversight Board, an independent body which will oversee and investigate allegations affecting the health and safety of detainees within the Department of Corrections. We look forward to finalizing board appointments and formalizing a system to investigate complaints."


We welcome tips and feedback. Email the author at [email protected]. Follow him on Twitter @RyanWKrull
© 2022 Riverfront Times