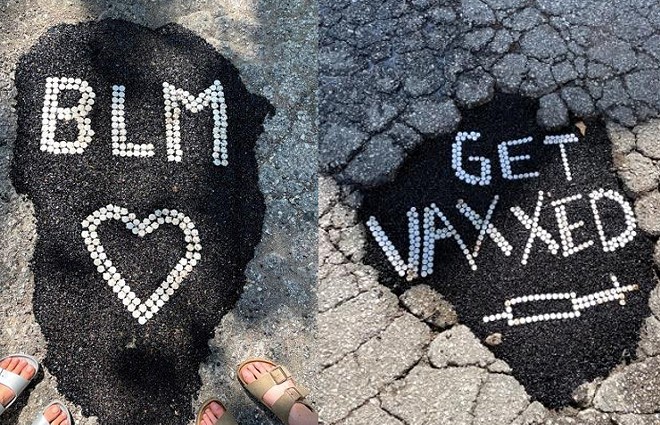 The streets in DeMun are little bit smoother thanks to Jamison Ford.

Ford lives in Clayton, just on the other side of St. Louis' city limits. He says that over the past two years, after watching pot holes in the city get worse, he's taken it upon himself to repair five of them.

"It just got to be annoying seeing pot holes in Clayton getting filled and then right over the line in St. Louis, things weren't taken care of," says Ford, a photographer and videographer who also dabbles in construction. "They do some damage to your car. It was just frustrating."

Earlier this week, Fox 2's Andy Baker did a story about a "mystery person" fixing pot holes in the city.

Ford says he got a kick out of the piece, but he doesn't think anything that he's doing is mysterious. The pot hole repairs he's done have happened in the middle of the day, usually with plenty of passersby and neighbors watching.

"I was probably just at home half a block away and hanging out in the backyard doing some stuff," Ford says about the Fox 2 piece. "I didn't see the news van but I would have talked to him."

After the initial pot-hole repair a little over a year ago, Ford says he started adding decorative tiles to his repairs. His second repaired pot hole had "BLM" tiled onto it above a heart, followed by repairs that said "Get Vaxxed" and "Eat the Rich."

Ford does more than just pot hole repair. He says last year an "obnoxiously large" tree fell across Rosebury Avenue. When it became clear neither Clayton nor the city were going to do anything about it, he went out with a reciprocating saw, chopped it up and moved it off the street.

While Ford doesn't encourage people to run into the middle of busy streets to do vigilante pot hole repair, he was happy to walk the RFT through the DIY pot hole repair process. He says the key is pre-made asphalt.

When asked if that's really all there is to it, Ford says, "Well, there's a correct way to do it, but we're kind of working on the fly."

One could spend several hundred, or even thousands of dollars on a tamper, a machine that compacts the recently-poured asphalt and makes it level with the street. But, Ford says, it's much easy to just put a piece of plywood over the newly-filled pot hole and drive over it a couple of times.

He adds, "These are like small side streets in some cases like an alleyway by our garage. I'm not running onto Forest Park or Skinker to fill up potholes. Be smart about it."

Courtesy Jamison Ford
A tiled heart embedded in the asphalt.