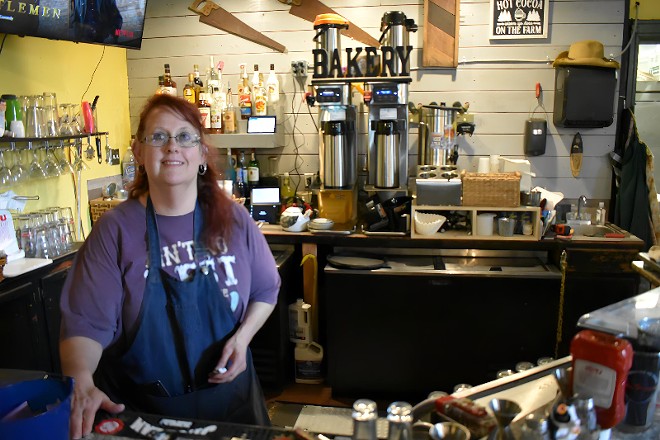 DANIEL HILL
Angie Swyers works behind the counter of her Soulard bakery, Mauki's.

On a recent sunny afternoon, Angie Swyers sits down at a picnic table in front of her Soulard bakery, Mauki's, and apologizes to a reporter for the frequent interruptions caused by the steady stream of customers entering her shop. The bakery normally isn't this busy at this time of day, she explains, before acknowledging that it's not a bad problem to have.

"Not right now, that's for sure," she says. "I would take a full house every day."

The more urgent need for customers is a recent development, following some financial setbacks that have left Swyers and her husband Lee struggling to pay the bills. In early May, Swyers launched a GoFundMe campaign to help cover rent on the building that houses Mauki's, in which the couple also lives.

"Mauki's is all I have, and I live above the bakery," Swyers wrote in the campaign's description. "If I get evicted, I will have no job or place to live."

Mauki's got its start as a booth at the Soulard Farmers Market in 2015. When Swyers lost her corporate job of 20 years in 2019, she and Lee began the search for a brick-and-mortar spot to sell her baked goods. They found their current location in February 2020, but the COVID-19 pandemic forced them to postpone their opening, even as they were already paying rent. In October 2020, they were finally able to open, and they've since built a growing and loyal customer base in the Soulard community. It wasn't until this year that they truly began struggling to make ends meet.

The most recent setback came in mid-February on the weekend of Mardi Gras. It was the first year since Mauki's opened that the city's festivities took place, and Swyers assumed there would be a dramatic uptick in business in the Mardi Gras-friendly neighborhood. She plunked down $10,000 on food to sell for the event, and she and Lee posted up at the picnic tables in front of the building to peddle their wares.

"We sat out here selling hot dogs and sandwiches and popcorn, and frankly, nobody was down here," Lee explains.

The pair ended up doing only about $3,000 in sales, he says, wiping out their savings and ultimately causing them to fall behind on rent. When Swyers launched the GoFundMe, she says they were on the brink of being evicted. They've since gotten caught up.

"Through the help of the community and my family," Swyers says. "That is the only reason."

But the pair is still hoping to get some more financial assistance. To date, the fundraiser has brought in only $2,190 of its $20,000 goal, and the building is in a state of disrepair. Meanwhile, the couple has been feuding with their new landlord, who bought the building in February, and who they say refuses to fix the building's many issues. Swyers says they'd planned to buy the building from their previous landlord and had even put in a significant amount of money fixing the place up themselves, including $100,000 that went into repairing the kitchen floor. But their prior landlord sold it before they were able to raise the money to purchase it.

"He couldn't wait for us any longer, for whatever reason," Swyers says. "Of course, after we sunk 100 grand into the kitchen floor."

Lee points out holes in three of the window frames on the side of the building where some of the wood has rotted away, explaining that when it rains, water seeps in and onto the bakery's counter tops. Swyers says that the front door to the upstairs apartment is broken to the point where it won't stay closed on its own; she and Lee were once awakened in the middle of the night by police officers who'd noticed that the door was wide open and came inside to investigate. The couple has since begun using a board to wedge the door shut at night. 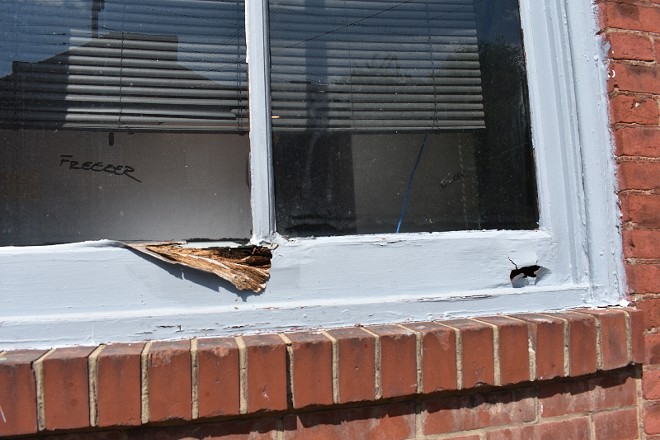 DANIEL HILL
The window frames on the side of the building that houses Mauki's are rotted, and allow rain inside.

Then there's the roof, which had been badly in need of repairs even under the previous landlord. That got fixed earlier this year but only after Lee threatened legal action.

"The roof was 50 years old. Nobody would replace it," Lee says. "So then in February, the new landlord took over. He didn't want to fix it. And then when the ceiling tiles started falling in, I called him and I said, 'You're fixing this or I'm gonna sue you.' Well he finally sent some people out to fix the roof. They actually fixed it right. But then they just left the ceiling tiles inside upstairs, crashed all over our stuff. Ruined. No insulation. So if we turn on the air conditioner upstairs, it just goes straight up out through the roof. It doesn't pass city code."

"Plus we had to clean up everything and buckets of water and stuff like that," Swyers adds. "It was a nasty mess, that's for sure."

Having narrowly avoided eviction, Swyers says that all they really want to do now is find a good lawyer who can help them get some of their money back for the repairs they'd made to the place when they were planning to buy it. Then they'd like to find a new location, preferably in the same neighborhood, to set up shop. Any further funds raised would go toward those efforts, she says.

For her part, Swyers hopes that this is all just a bump in the road, and that she'll be able to continue serving her neighbors for years to come.

"We're just trying to make a living and be good at what we do, and the community ... they've come twofold here," she says. "And I just I hate to leave this community if I don't have to."