ROSALIND EARLY
Founder and co-owner of Steve's Hot Dogs and Burgers, Steve Ewing, and Chef Joseph Zeable with the St. Louis-Style dog and the resolution from the City of St. Louis, making it the city's official hot dog.

Invented by Chef Joseph Zeable, the dog is Steve's former HYAAAH! hot dog. "When we opened up the restaurant on the Hill, we would routinely just shout hyaaah at each other," Zeable says. "And we decided to name this dog that." 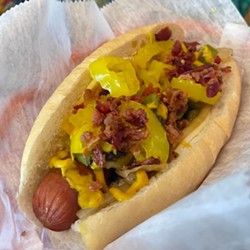 Steve's founder and co-owner, Steve Ewing, says that when Zeable created the dog 12 years ago, he was thinking about making a St. Louis style dog the way Chicago has a style of dog. "I'm surprised nobody thought of it sooner," Ewing says.

We know what you're thinking, what's this dog got?

Zeable wanted to use flavors that evoked St. Louis, so the dog includes a smoked and grilled all-beef hot dog in an Italian-style Vitale's bakery roll that is lined with provolone cheese. ("We tried Provel cheese," Zeable says, "but it didn't work as well as a provolone slice.") It's topped with grilled onions, green peppers, banana peppers, bacon and Steve's housemade smokey pepper mustard.

The mustard is what takes the dog over the top. "It is bright, tangy, wonderful," Zeable says.

That's right. Not only is it a good looking dog, there's no ketchup. Every hot dog purist knows that ketchup on a dog is a sin against nature.

"If it had ketchup on it, we would get yelled at," Ewing says with a laugh. "We would get bludgeoned."

Despite the dog's origins, Zeable and Ewing did not decide themselves to make it St. Louis' official hot dog. Instead, Steve's launched the "Road to the Official Hot Dog of St. Louis" a bracket that put six hot dog recipes head to head over the course of five weeks.

Some of the contenders included the Slinger Dog, inspired by Eat Rite's famous slingers, the Hill Dog and the Pork Steak Dog, which includes braised pork steak, house slaw, crunchy onion and a chipotle sauce.

"We had a feeling that one might actually win," Ewing says. "It didn't, but it came really close, so we ended up putting that one on the menu permanently."

On Wednesday, Alderwoman Christine Ingrassia presented Ewing with a resolution by the St. Louis Board of Aldermen making Steve's St. Louis–Style hot dog the official hot dog of the city. 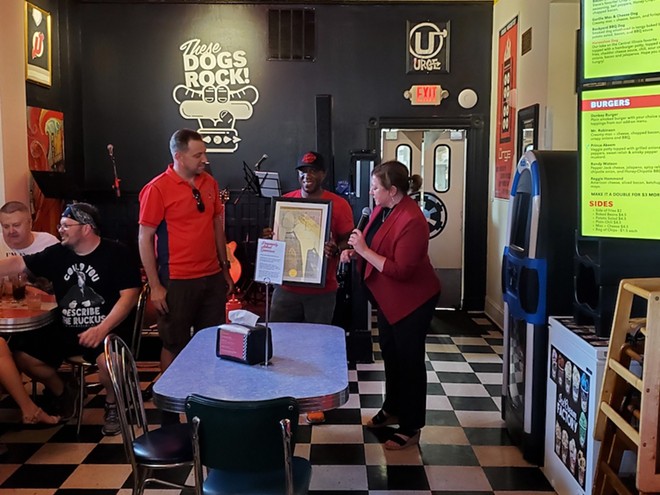 "Steve's has been not just an incredible restaurant partner within the region and the country but also really incredible in understanding the challenges of the city and helping address those," Ingrassia says. Steve's has provided food to a wide number of organizations and people, "including supporting pop-up winter shelters ... to ensure unhoused individuals had food," she says.

Ingrassia is also a big fan of Steve's Hot Dogs and Burgers and says there isn't a menu item she hasn't tried. And she's supportive of the winner. At the presentation, she also made a joke that this resolution was one of the only things the Board of Aldermen had unanimously agreed on lately.

The big question of the night was, of course, is a hot dog a sandwich? "Oh yes!" Ewing says. "It's definitely a sandwich. It's meat, bread and some toppings on it. That's a sandwich."