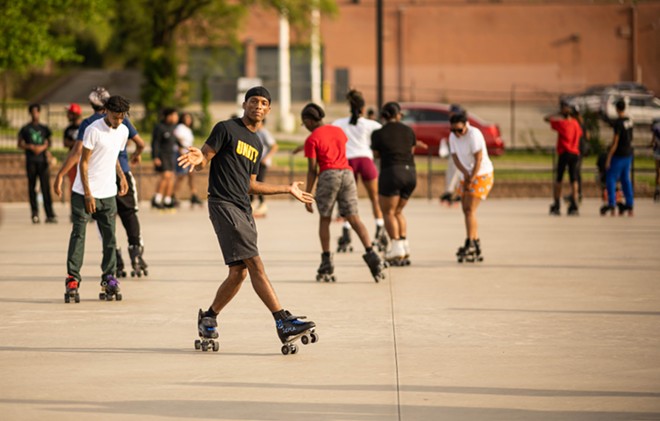 Dellwood Recreation Center was the place to be for roller skaters on June 9. The weather, though unpredictable, wasn’t blazing hot like it is now. The smooth, concrete surface of the outdoor skate rink hummed as 80 or more skaters jammed to DJ Reala and DJ Dasho’s mixes of trap, R&B, gospel and funk.

This was the “Unity Skate,” one of four youth pop-up roller skates organized by James Reala Stampley aka DJ Reala in conjunction with the St. Louis Mental Health Board and St. Louis Violence Prevention Commission. The first skate, “New School vs Old School,” took place at the end of April.

“I dream of producing events that have substance, that give us vital reasons to pay attention to each other — in my Marvin Gaye voice — to what’s goi’n on,” he says.

Stampley and his co-organizers created the events to provide a solution to gun violence among young adults, a growing problem in the St. Louis region and beyond.

There have already been 27 school shootings this year, and 17 other mass shootings across the nation, according to Al Jazeera. Last month, this country saw one of the deadliest mass shootings in its history at Robb Elementary School in Uvalde, Texas, when 19 children and two adults were killed by an 18-year-old gunman. In St. Louis, between 2011 and 2015, the Department of Justice and the City of St. Louis reported that 58.4 percent of suspects and 36 percent of victims were young adults, aged 15 to 24 years old.

“These skate events are really just about letting youth, especially that 16-to-25 age range that we know are at higher risk of violence, letting them just be young in a fun environment that is safe for them. Because we know those are lacking,” says Jessica Meyers, project director for the St. Louis Area Violence Prevention Commission.

Stampley’s intention was for these events to be an outlet for the community and a way for skaters to experience a variety of different music. Skating can take “the troubles and pains and worries away, refreshing our minds and bodies,” he says. “These events are a healthy and safe way to spend your time.”

The collaboration that led to the pop-ups began last fall, when Serena Muhammad, deputy director of the St. Louis Mental Health Board and member of the St. Louis Violence Prevention Commission reached out to Stampley after learning that one of his events had been canceled due to weather.

The partnership tapped into St. Louis’ long-standing tradition of roller skating providing protective factors for youth development in the community. Since the Civil Rights Movement in the 1950s and 60s, roller skating has been a culturally significant recreational activity for Black people. Skating rinks were spaces of freedom and authenticity, and St. Louis skate nights put smooth and ballroom styles on the map.

In St. Louis, Roller Skating Is Bigger — and Smoother — Than Ever


“If you ever talk to some of the folks who have been lacing up for a while, and you ask them about how they started, they start to talk about how these master skaters would take them under their wing and coach them at the rink,” Muhammad says. “You develop this sense that there is one love here. In many cases, you know, these are people who might have chosen to do something else with their time. They may not have been mentored if they didn't have this particular outlet.”

Britny Cordera
More than 80 skaters came out for the June 9 “Unity Skate.”

Skaters in older generations awarded some of the young adults present Future STL Skate Legend trophies. “I know it meant the world to them to receive those awards. Who wouldn’t feel good after getting a trophy,” says Xavier Woods, also known as Professor X.

Malak, a 19-year-old participant of all four events, received an award from Ra, one of the skaters he admires, which includes Woods.

“I cannot forget the one that took me up under his wing, showed me the ropes, put me on my game inside the rink and outside the rink,” Malak says. “I wouldn’t be this good if it wasn’t for X.” Woods not only showed him the ropes of the ballroom style but also how to handle many problems Black men face today.

Woods is a St. Louis legend and skate teacher for the young adults in the community. He’s been skating for 37 years. He began learning at Saints Rink in Olivette, which closed in 2003, from mentors who helped keep him out of the streets Woods says. “I was focused on skating, developing my skating skills and abilities and also traveling and showing STL skate style to different cities and states.”

Now celebrating five years of sobriety, Woods has become a role model for the students he mentors and has a group called Skate Swagg Elite for them to feature their moves.

“It helps me to show them that you can have fun on roller skates without drinking or drugs,” he says. “If they look up to me as a skate legend, and they find themselves in my situation, they can come to me for advice and see that if he can do it, I can do it, too." 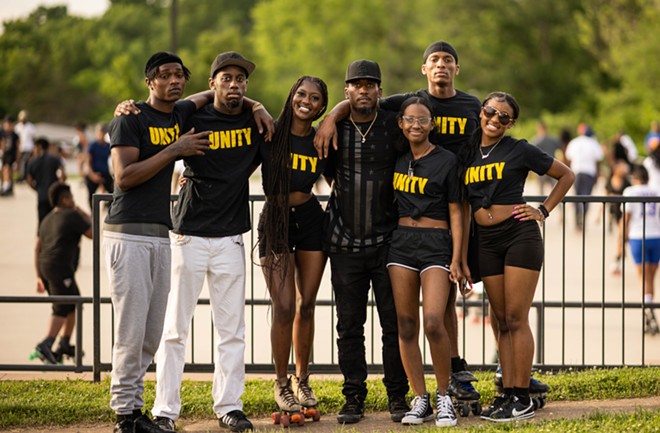 Melvin Shannon LLC and Seb Ferko Photography
DJ Reala poses with his family, sons Jaheim Stampley and Jaylen Stampley, his daughter Janaye Stampley, and his nieces and nephews, Jamiah Stampley, Jamyah Miller and Pernell Stampley Jr.
For the Violence Prevention Commission, these events were an opportunity to show the youth that they are loved and cared about during these times of high anxiety in our country.

“This is really an opportunity to invest in safe spaces for our children, to show that we value them and they are valued members of our community and that we want to invest in their lives,” Meyers says.

Stampley agrees, adding that we need more clean places, indoor and outdoor, for children and young adults to gather and enjoy life. “I may have distracted the distracted,” he says. “I may have given a young adult a chance to make a better decision. I may have saved a life leading these events.”

Malek would like to see more of these skate pop-ups. “These events have brought a lot of people together, new faces and OG’s alike,” he says. “It gave me and my crew something to do every Thursday. They gave us free meals and free entertainment. It’s helping the community in a good way,” he says.