Anthony Favazza is proud to be the steward of a St. Louis institution 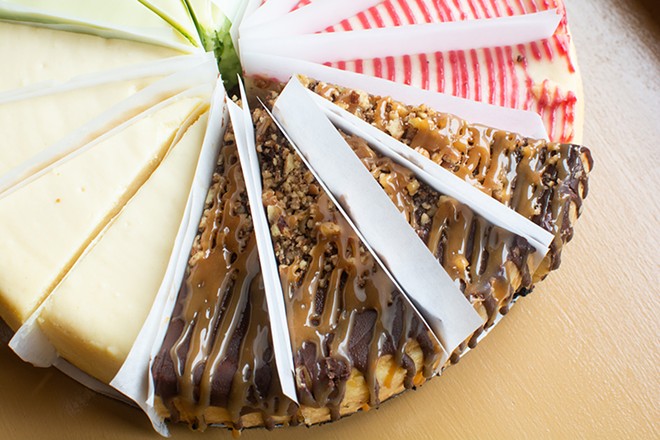 Andy Paulissen
For nearly 40 years, Hank's Cheesecakes has been the gold standard for sweets in St. Louis.

Anthony Favazza knew that taking over as iconic an institution as Hank's Cheesecakes (1063 Big Bend Boulevard, Richmond Heights; 314-781-0300) in the middle of a pandemic would have its challenges. However, even a lifetime of working in the food business did not prepare him for dealing with the most existential threat to a cheesecake operation: a global cream cheese shortage.


"The whole supply-chain disaster has been challenging for everyone, but it has been multitudes more challenging here at Hank's," Favazza says. "A piece of our secret sauce is that we source the very best ingredients on the planet. All of our chocolate is imported from Belgium, so it takes a lot of things working right for everything to get here. I joke that I'm going to start a reality show called 'Cream Cheese Hunters.' Getting the ingredients to make Hank's work has been very challenging because it's a global supply game."

Favazza can't help but be struck by the irony of his predicament. Hank's, after all, would not exist were it not for the glut of cream cheese that founder Hank Krussel and his mother found themselves with when he was a little kid. 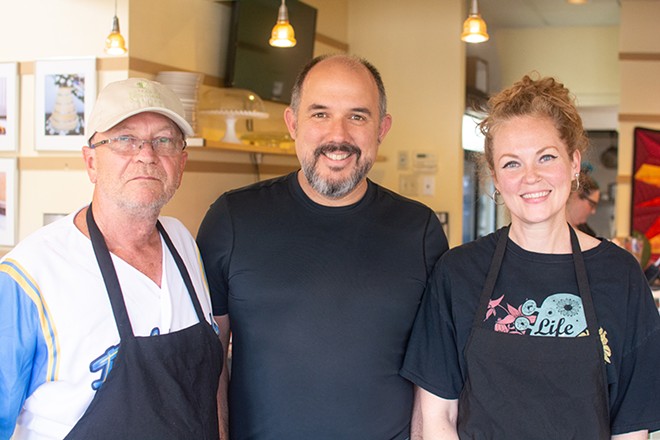 According to Favazza, who pried the story from the attention-averse Krussel, the germ of the idea that would become Hank's started with Krussel's father, a union pipefitter who was one of the only people in town with the expertise needed to work on the equipment at the then-local cream cheese factory Raskas. Because of his specialized know-how, the elder Krussel would often get emergency phone calls in the middle of the night asking for his help when Raskas' cooling systems went down.

As a token of their appreciation, the Raskas bigwigs would send him home with a large box of cream cheese. He began bringing them home so regularly that Krussel's mother had to get creative.

"They had cream cheese coming out their ears and didn't know what to do with it," Favazza says. "They started playing around with it; Hank has all these stories about all of the stuff they tried to make out of it — jello salads and all of that."

Cheesecakes were the most obvious choice, and Krussel and his mother got very good at them — so good that Krussel continued to make the luxurious treats for fun throughout his college and military careers. Originally, he thought he'd only bake as a hobby and as a way to share his passion with friends and family. However, once he got out of the military, he decided to turn his love for cheesecakes into a business. 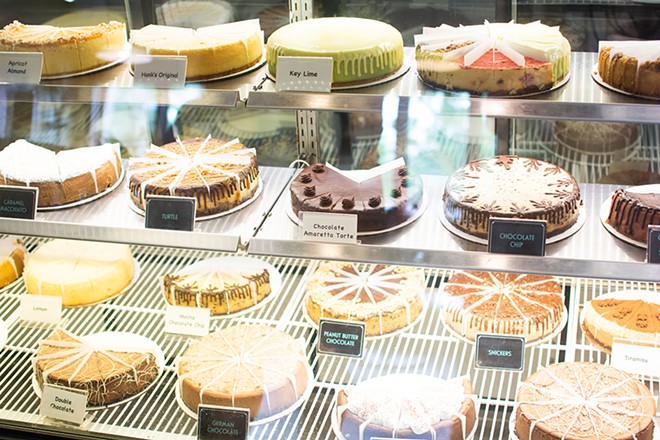 Andy Paulissen
Hank's is known for it's artful designs and creative flavors.

"I don't think this was ever something he thought he would do for a career, but people loved his cheesecakes so much, it just happened," Favazza says. "It's funny how the thing you are supposed to do ends up finding you."


Krussel launched Hank's from his apartment kitchen in 1983, baking his signature cakes and walking them to restaurants and bakeries, hoping the businesses would help carry his wares. Favazza recalls a story from one of Hank's earliest customers, Marjorie Amighetti of the famed Amighetti's sandwich shop in the Hill neighborhood.

"Mrs. Amighetti has a very clear memory of Hank walking in the bakery and saying, 'I have this new cheesecake business, and I want you to buy my cheesecakes,'" Favazza says. "At the time, her husband was a very well-known bread baker and also made wonderful desserts. He was making their cheesecakes from scratch, but when Mrs. Amighetti tried Hank's, she told him that they were not going to make them anymore. They were going to buy his."

Krussel's business took off by word of mouth, eventually getting so popular that he outgrew his home-kitchen setup and moved into a small storefront on Big Bend Boulevard in 1987. That, too, became so popular that he relocated down the road four years later, expanding his retail offerings and solidifying his reputation as the greatest cheesecake show in town. When asked why he was so successful, Krussel would always point to quality; unlike other cheesecakes in town, which he believes are overcooked, his are fluffy and light. Add to that the artistry and creative flavors that long predated the Cheesecake Factory's presence in St. Louis, and there is no doubt that Hank's is one of St. Louis' most iconic brands. 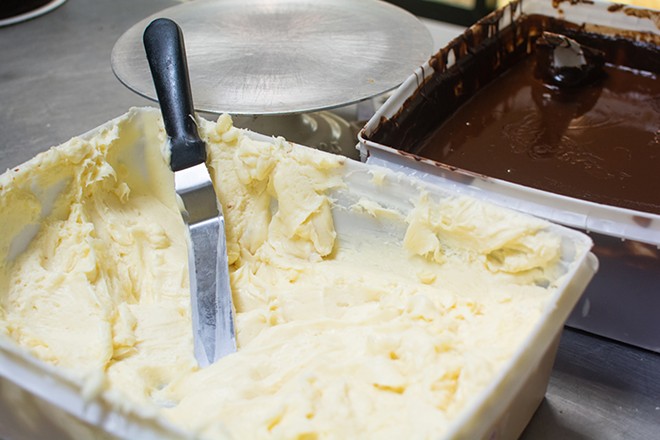 Andy Paulissen
The current cream cheese shortage has been difficult to navigate.

That reputation is what made taking over Hank's a no-brainer for Favazza. A longtime restaurant veteran thanks to his family's restaurant on the Hill, Favazza jumped at the chance to take over Hank's when Krussel was ready to retire. Krussel, too, saw this as an ideal situation; after witnessing how Favazza handled the transition when he bought Amighetti's in 2016, Krussel knew his business would be in the hands of a committed steward.

Favazza has been just that. Though he understands the nervousness longtime customers may feel when their favorite brand is sold, Favazza has kept business running as usual. It also helps that Krussel has been by his side throughout the process, stopping in multiple times a week to check in on the business and greet his longtime guests. The transition has been so seamless that regulars often greet him with a "thank you" for making sure their beloved institution lives on.

"It's a huge privilege and a huge responsibility, and I don't take it lightly," says Favazza. "I've had a number of people thank me for keeping it the right way." 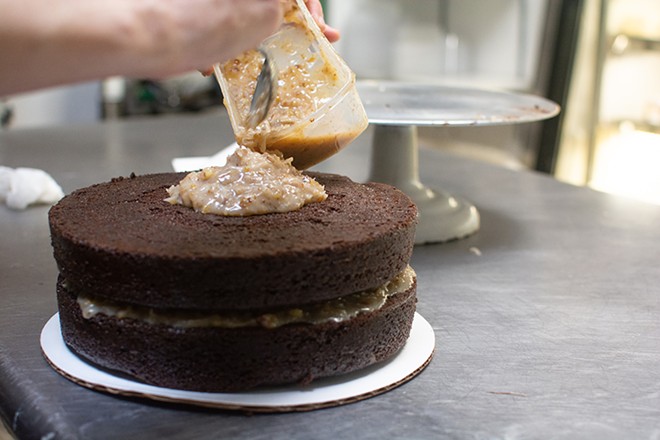 Andy Paulissen
Hank's is an integral part of many St. Louis family celebrations.

Favazza has come to understand why people feel such a sense of gratitude toward him for keeping Hank's thriving as it always has. Since taking over the business in October of last year, he's already gotten to know the multiple generations who see Hank's as an integral part of their family traditions. One thing that surprised him was how many weddings the bakery does — something he feels that he can only manage with the help of his team of bakers, including Ken DeSmet and Rich Pfeifer, who worked as a baker for Straub's for many years. Favazza credits them with keeping things consistent and ensuring that Hank's continues to be a source of joy for its loyal guests — a responsibility that animates everything he does at the bakery.

"Hank actually advised me to get out of the wedding business because it's such a stress on operations and not a significant part of revenue," Favazza says. "However, even in the first few weeks I was here I was meeting all these customers telling me that they had their first Hank's cheesecake at their cousin's wedding or even their own wedding. A huge percentage of our customers were introduced to us at weddings. You can't quantify what it's worth to have the mother of the bride bragging to everyone at the wedding that they are serving Hank's cheesecake."

We are always hungry for tips and feedback. Email the author at [email protected]
© 2022 Riverfront Times