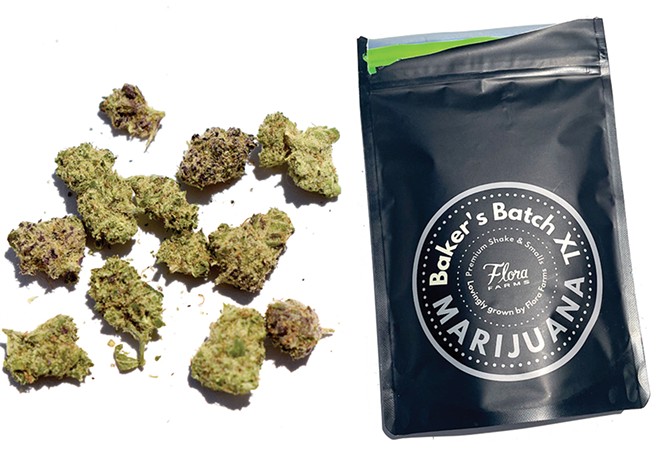 Some penny-pinching types might use a phrase like "careful with money," "frugal" or "always looking for a bargain" to describe themselves. Not me! I'm just cheap, dear reader, and that especially applies to my journeys through the cannabis market. Luckily, there's never been a better time to be a cheap stoner in this state — prices have finally started falling in the Missouri medical marijuana space as competition heats up, and the many budget offerings on the market ensure you can even get your hands on an ounce of decent weed for under $200. Not too shabby.

This week's dispensary of choice was the Cherokee branch of Swade (2316 Cherokee Street, 314-924-6504), and this week's strain of choice was Flora Farms-branded Platinum Grape Runtz, sold in a wallet-friendly manner dubbed a "Baker's Batch XL." Its package says the half-ounce pack is full of the smaller buds and shake, perfect for cooking or infusions (hence the "Baker" bit), and its $80 pre-tax price point also makes it perfect for those of us smokers who are, as mentioned, quite cheap.

Flora Farms' Platinum Grape Runtz is a hybrid, but it's definitely indica-dominant, and the contents of the bag are truly covered in a dusty kief. The list of parent strains it came from is like a who's who of comedy '90s weed names — Zkittles and Grape Ape, to name but two. I love that, even now, and even in a medicinal setting, no growers are making new strains with sensible names. Imagine if some new anti-inflammatory tablets were called Alien Space Bananas rather than umexitab or whatever fake-sciency name they have. Same vibe.

Swade's website lists Platinum Grape Runtz at 22 percent THC, and if you were to see the full flower, you'd notice the beautiful purple coloring — even with the mini-buds, you'll see a few of them with that color, which is nice. I didn't notice much in the way of a discernible smell, though, and that's mostly because it doesn't really smell of anything other than weed. But I wouldn't call that a dealbreaker, especially at this price point. It's like being forced to drink normal boring coffee when you've gotten used to the French vanilla flavoring — which is to say, perfectly fine, of course.

But enough preamble. As with those online recipe blogs where the writer spends three-quarters of the post banging on about something their husband did, which reminded them of a trip to rural Italy, which reminded them of a fresh ingredient, which reminded them ­— oh my God please get to the point ­— you're reading this because you want to know whether this stuff is any good or not, and if it is therefore worth $80. To that end: If you're aiming to use this to relieve your aches and pains, then you'll do well, and this particular indica-dominant strain will make sure you don't want to wander too far from your sofa. It's not going to knock you out, but you'll definitely know what you've taken. In my experience, though, if you're trying to break your habit of spending hours every night falling down YouTube rabbit holes — why do I watch so many videos about coin collecting? I don't care about coins! — this might not be the product for you.

In sum, even though we're not getting the finest cuts of Platinum Grape Runtz for this ridiculously low price, Flora Farms is still looking after us with a great deal for the cheap stoners among us. Not bad at all.