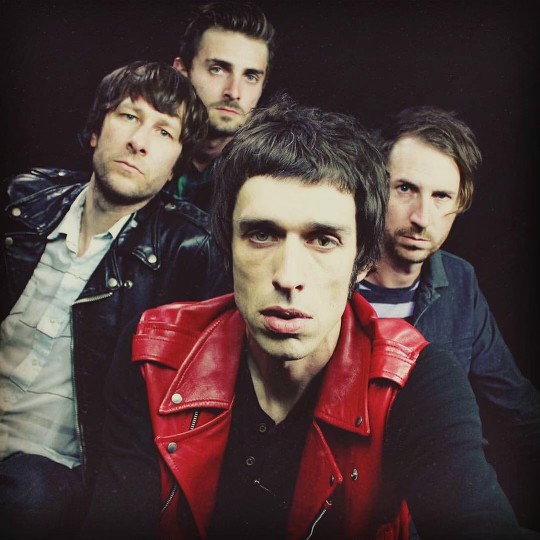 Courtesy of The Yowl
The Yowl will finally celebrate its second album, It’s Rock and Roll, Babies!, Saturday at Off Broadway.

They say don’t meet your heroes. Instead, Bobby Wofford, lead singer of St. Louis-based punk rock band The Yowl, has worked with them.

A Salem native, Wofford grew up on Chuck Berry. His dad would often take him to see Berry live at Blueberry Hill, a tradition that continued even as Wofford got older. Over time, Wofford got to know Berry’s live pianist, who he credits with helping introduce The Yowl to the St. Louis music scene.

In 2011, The Yowl returned to Blueberry Hill as Berry’s opening act.

“That was super cool,” Wofford says, joking that he could have quit then and been satisfied. “I feel like if you come from Missouri, [Chuck Berry is] in your blood.”

The early 2000s found Wofford in Los Angeles, where he played in a different band with bassist Heath Lanyon, a future co-founder of The Yowl. During that period, they developed a relationship with Wayne Kramer, a guitarist for American proto-punk rock band MC5 — and coincidentally, one of the band’s biggest inspirations. When the pair formed The Yowl in their home state of Missouri several years later, Kramer’s guidance was “integral” to their success.

It’s been over a decade since Wofford and Lanyon founded The Yowl. In that time, the band has taken the mentorship of its idols and carved out a brand all its own. At its core, The Yowl’s sound is classic punk mixed with rock ’n’ roll. Its self-titled debut (Industrial Amusement, 2015) features all the staples of a robust punk album: angsty guitar, upbeat tempo and vocals that sound like they’ve been shouted from rooftops or drenched in cigarette smoke. Track titles such as “Money, Power, War!” and “Lips of the Apocalypse” cement the album as a modern feat of classic punk. Several of its tracks have been featured on the soundtracks of shows such as Shameless, Criminal Minds and Survivor.

With its latest album, It’s Rock and Roll, Babies! (Sioux Records, 2021), which dropped in summer 2021, The Yowl continues this legacy and incorporates elements of psychedelic rock. The sophomore effort does not mark a departure from the debut album. Rather, it serves as a continuation of the band’s creative vision and an opportunity to see what they can accomplish within the punk-rock genre.

The Yowl draws inspiration from psychedelic and punk rock pioneers such as Iggy and the Stooges, MC5 and Roky Erickson. The lattermost holds a special place in the band’s heart, as Yowl lead guitarist Eli Southard and drummer Matt Long both toured with Erickson’s band during the last years of his life. Wofford cites The New York Dolls as one of his personal idols — given Wofford’s previous track record, it should be no surprise that the Dolls’ late lead pianist Sylvain Sylvain has a guest track on It’s Rock and Roll, Babies!

The Yowl dropped It’s Rock and Roll, Babies! in two parts: Side A, which featured brand new material; and Side B, which features select tracks from the self-titled album that the band wanted to add to the LP. Side A is self-produced, with Southard responsible for the engineering. Side B was produced and mixed by Jonathan James of indie pop band Someone Still Loves You Boris Yeltsen.

The Yowl did not release It’s Rock and Roll, Babies! on streaming platforms. Instead, the band opted to distribute it exclusively on vinyl through Sioux Guitars.

“You don't make any money as an artist off of [streaming], really,” Wofford says. “ It becomes, like, [the music’s] not worth anything once you put it on YouTube. But a record you're able to give to people, and they have something that not everybody else has. We want to make it special.”

The momentum that accompanied the album ground to a halt in late 2021 when Wofford contracted a voice-threatening infection and Long discovered he had a benign brain tumor the size of a baseball, which he dubbed “Tumorthy.” Both members were unable to play, forcing The Yowl to postpone the release party indefinitely.

With both members fully recovered, the band is ready to return full-force with an album release performance at Off Broadway (3509 Lemp Avenue, offbroadwaystl.com) in downtown St. Louis this Saturday, July 16, at 8 p.m. Long is more than ready for that return.

“We're awesome. Every day we get up and try to be normal, but end up just kicking ass at everything,” Long writes in a note relayed to the RFT by Wofford.

​​Wofford, with a touch more humility, shared his bandmate’s enthusiasm, saying the band is excited to have had such a great reception in St. Louis.

Anti-establishment attitudes are a hallmark of punk rock, and The Yowl’s music is no exception. However, at the heart of their music is an appreciation for rock and roll and a sense of connection with the people who listen to it.

“It’s music; music can weave into having a political message or whatever, but I think just to make people happy or give them some kind of relief from the world around them — that's the intent,” Wofford says. “You know, it’s only rock and roll.”