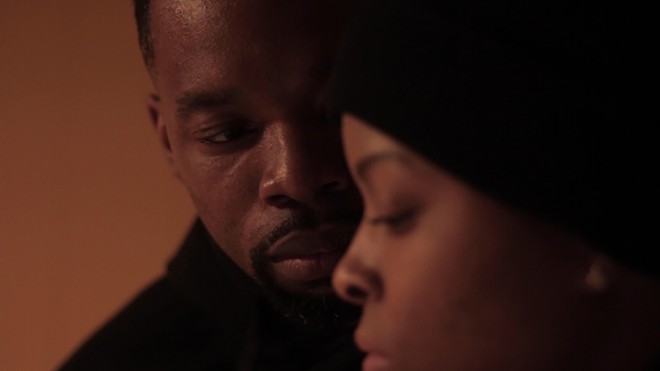 Growing up in north St. Louis city, Bruce Carlton Cunningham’s cousins gave him a less-than-flattering nickname — couch potato — because he’d post up in front of the TV and not move. During those hours, he became enthralled by the worlds created within his favorite movies.

“I always wanted to be on the big screen,” he says. “I also wanted to actually make the film, and so after watching the movies, I would act them out when I was young.”

That childhood ambition of Cunningham’s is about to become a reality.

He directed, wrote, acted in and produced a film, Un-resolved, that is set to close out the 22nd Annual Whitaker St. Louis Filmmakers Showcase on Sunday, July 24, at 4:30 p.m. It’s one of 73 films and shorts that will show as part of the two-weekend festival, which kicks off today at Washington University’s Brown Hall Auditorium.

Everything included as part of the showcase must have a St. Louis connection — a local director, subject or actor.

“It highlights the great depth and breadth and talent of the local filmmaking community, which is super impressive,” says Chris Clark, artistic director of Cinema St. Louis. “It's gotten just better and better over time.”

Courtesy Cinema St. Louis
In the animated short Space Race, two astronauts try to claim the moon. It will play at 6 p.m. on Friday, July 22.

Clark would know, as he’s been with Cinema St. Louis since 1997. He was there for the first year of the showcase, which was run by the St. Louis Film Office, a government-funded entity meant to promote filmmaking in St. Louis that quickly ran out of money.

St. Louisans met the inaugural showcase with enthusiasm, though, and Cinema St. Louis took notice. When someone at city hall asked if the group would like to take over, Clark and others jumped at the opportunity.

Entries for the showcase open every year in January, though Clark says most films come in toward the end of the submission period at the end of May. Many submissions are by filmmakers, but plenty are by hobbyists.

“It's always fun and exciting to look at that all,” Clark, who watches all the entries himself, says.

Some showings are made up of disparate shorts that fit together in themes: thriller, animated and experimental, drama, comedy and supernatural. Others are single, feature-length films, such as Cunningham’s Un-resolved. With a run time of two hours and 45 minutes, it’s the longest offering in the showcase.

Clark recalls it coming in toward the end of the submission process. “‘It can’t be right,’” he says, remembering thinking it must be one hour and 45 minutes, or maybe just 45 minutes. “How can this possibly hold up all the balls in the air for all that time?”


But Clark found himself drawn in by the film, which follows an ex-convict attempting to reconcile with his two daughters after being released from prison. He describes it as a “time-spanning revenge drama” and “Shakespearean.”

Though he’s looking forward to showing his work, Cunningham finds himself a bit anxious about holding viewers’ attention for all that time. He’d actually tried a few different, shorter cuts during the five years that he’d worked on it, but kept returning to the longer version.

Un-resolved evolved from a series of shorts that Cunningham had made, and the character names date back from when he was studying film in college at Missouri Western State University. Now 42, Cunningham decided to flip his character from being the villain to the protagonist as his perspective changed over time and as he became a father himself. One of the actresses in Un-resolved is Cunningham’s daughter.

“Daddy and daughter did a movie together,” he says. “I created the role for her.”

The showcase offers something for any viewer. Other crime-related offerings include Hungry Dog Blues, a modern Western set in Missouri and All Gone Wrong, about a veteran cop on the hunt to uncover a narcotics network. There’s comedy, such as Ethan and Edna, a short about a foul-mouthed grandma helping her loser grandson. There are documentaries, like Winemaking in Missouri: A Well-Cultivated History and Night Life, which is about St. Louis’ “Pastor of the Streets” Reverend Kenneth McKoy.

All this, and more.

“Try something different,” Clark says. “[Film] is part of the arts scene here, and we want people to kind of figure out that it’s really big.”