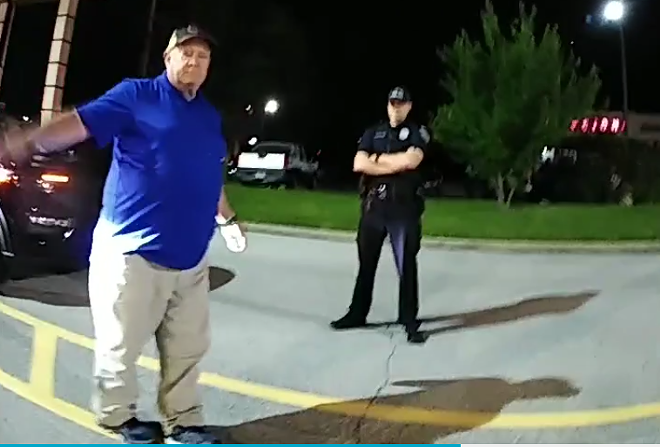 Recently released footage of a May 28 traffic stop involving Hazelwood Police Chief Gregg Hall shows that the O'Fallon officer who pulled him over described him as "hammered drunk" to a supervisor before ultimately releasing him with no charges.

What's more, then-O’Fallon Police Chief John Neske appeared on the scene as well, and is seen on the video hugging Hall before telling his subordinate he's going to give his fellow chief a ride home.

The footage, which was obtained by the St. Louis Post-Dispatch through an open records request, also shows Hall struggling to maintain his balance, slurring while reciting the alphabet, and taking a breathalyzer test administered by O'Fallon officer Nathan Dye, who subsequently noted that his blood alcohol content was more than two and a half times the legal limit.

“He is hammered drunk right now,” Dye told his supervisor at the scene.

The stop was made at approximately 3:30 a.m. on May 28 near the intersection of Highway K and Highway N in O'Fallon.

“The reason I pulled you over. .. You’ve been weaving quite a bit,” Dye told Hall after approaching his car.

It didn't take long for Hall to identify himself as a fellow officer.

“I’m actually the police chief,” Hall said, according to the video.

Dye then conducted a series of field sobriety tests, during which Hall appeared to struggle. When asked to say the alphabet from "D" through the letter "H," Hall cruised right through to "U" before asking the officer where he was supposed to stop. In subsequent footage, Hall is asked to walk a line and appears to struggle to maintain his balance in the process. When Dye administered a breathalyzer, it registered at more than double the legal limit.

Dye's supervisor, who is shown in the video but not named, asked upon learning of the breathalyzer results whether the stop had been caught on video. Dye told him that it had.

“Yeah this is a tough day and age, man, you know, when you have, uh, they insist on all these electronic things and technology,” the supervisor replied.

That supervisor then called Neske, who arrived at the scene shortly thereafter. Dye's body cam was turned off before Neske arrived, but a separate video released by the department shows the former O'Fallon police chief giving Hall a big hug before telling Dye that's he's going to drive him home.

“Nathan, if I take him home are you going to have any issues?” Neske asked.

“That’s OK. You do what you gotta do,” Neske responded. “If you don’t mind, I will take him home. I’ve known him for a lot of years.”

Hall's lawyer, Travis Noble, tells KMOV that the sobriety tests performed on Hall do not count. He says that Missouri law mandates a 15-minute period of observation before a breathalyzer can be administered, and in this case only 10 minutes had passed. He furthermore claims that the other tests shouldn't have been performed due to Hall's age and weight.

"It would be impossible for them to move the case forward in this situation,” Noble tells the station.

Officials from both cities, meanwhile, have largely remained tight-lipped since the footage was released. Hall, Neske, O'Fallon Mayor Bill Hennessy and Hazelwood Mayor Matthew Robinson have all either failed to respond to requests for comment or declined to speak on the matter.

“Our official comment is it is a personnel matter and it will remain confidential,” Hazelwood Assistant City Manager David Leezer told the Post-Dispatch on Thursday morning.

Neske retired from the force a few days after the stop. According to KMOV, that retirement had been planned long in advance. O'Fallon's current police chief, Frank Minninni, reportedly told the station that he would be looking into the incident.