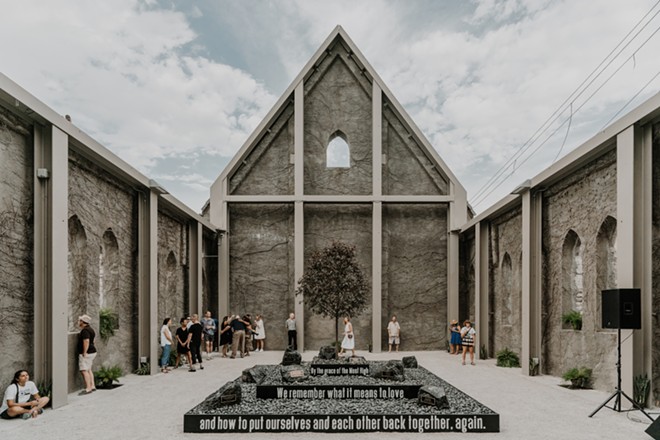 Virginia Harold Courtesy Pulitzer Arts Foundation
"All Our Liberations" will be open in the Spring Church through Sunday, July 24.

Whenever Jordan Weber visited St. Louis to catch up with his extended family or in-laws, he’d visit the Spring Church, the ruins of a 1950s-era church located on Spring Avenue near Grand Center. Built in 1884, the church fell into disrepair after a 2001 fire. Now, with its roof long gone, the stone building stands open to the heavens, covered in ivy.

For 17 years, Weber would stop by the church for a moment of respite on those visits.

“I’ve just been obsessed with it,” he says. “I would go to the Spring Church or, if I went to the [Contemporary Art Museum] or the Pulitzer, I'd park in front of it and take some time. Just kind of chill out there. So it’s always been a site where I wanted to do something.”

Weber, an artist hailing from Des Moines, Iowa, who has worked in land activation and environmental justice for the past 15 years, has finally gotten to do something with Spring Church. On Saturday, his installation “All Our Liberations” opened in the church and will be on display to the public through Sunday, July 24. Weber intends for the work, which extends from a 2021 residency with the Pulitzer and various St. Louis-area collaborators, to be the locus for a variety of social and environmental justice collaborations and also a place of respite and healing.

“The idea of respite and decompression at these sites is very important, especially for Black and brown folks to kind of just do our own thing, and be ourselves in a supported safe space,” he says. 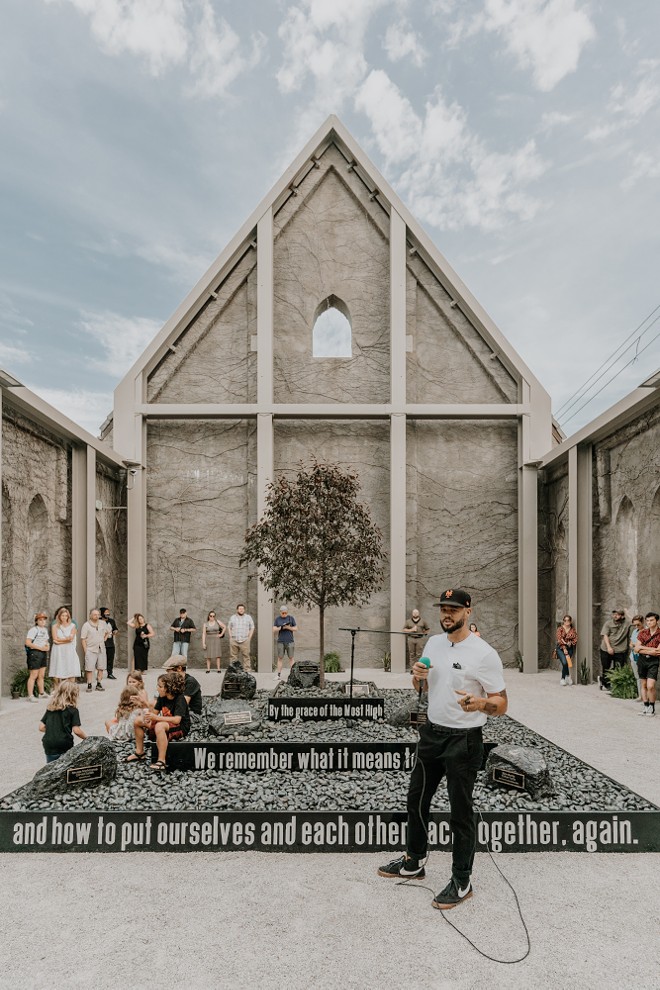 Virginia Harold Courtesy Pulitzer Arts Foundation
Jordan Weber speaks at the opening of "All Our Liberations" in the Spring Church on July 16.

Enter into the Spring Church, and you’ll see a three-tiered pyramid of black rock topped with a tree. Along the sides of the pyramid is painted the words of a poem by St. Louis’ Cheeraz Gorman, and atop the tiers rest small boulders of more black obsidian sporting bronze plaques with a tributes to St. Louis community organizations including ArchCity Defenders, Black Healers Collective and others.

The form, Weber explains, is loosely related to that of a Zen Garden. The work grew out of another installation that he created as part of the Luminary's 2020 show “America's Mythic Time." The installation took the form of a chrome stoop with a space underneath large enough for a person.

“You could meditate underneath it,” Weber says. “It’s kind of like this — I’m doing air quotes that you can’t see, obviously — safe space to get information.”

The idea of creating safety flows from that project, and both works draw from his involvement with the protests in Ferguson following the killing of Michael Brown and the change Weber seeks to spark. 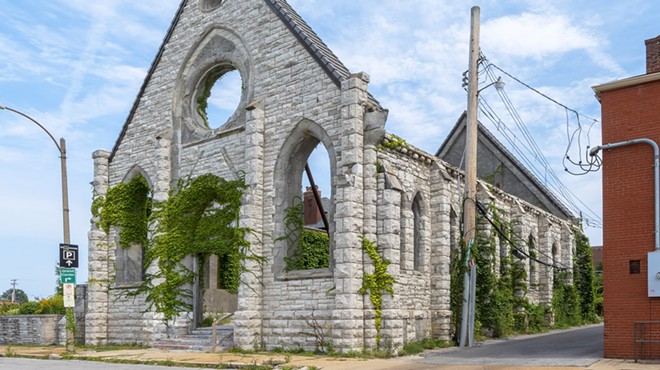 Everyone’s Favorite St. Louis Church Is Getting a Makeover


Weber sees installation as part of the solution to societal and environmental issues because of its power to change or “activate” spaces that aren’t being used or are being underutilized. It’s also about bringing together disparate people and groups.

It’s the last aspect of the installation that Weber emphasizes and hopes will be the real legacy of the project — though he will be moving it to its permanent home in Peace Park in the College Hill neighborhood of St. Louis in 2023.

“With Pulitzer especially, it's really important that I'm allowing myself time and energy to build genuine relationships with people in a way that they can open up and, hopefully, trust in my process a bit, and want to just work with me,” Weber says, “And want to welcome me into the neighborhoods to do something with them.”

Visit “All Our Liberations” at the Pulitzer Arts Foundation’s Spring Church (Spring Avenue between Washington Boulevard and Grandel Square) through Sunday, July 24.