Some Holly Hills residents want more security, additional changes. Others have concerns about the proposal. BENJAMIN SIMON
Holly Hills is a neighborhood in South St. Louis, where some residents are calling for a special business district to generate additional money for the community.

For Christa (Jackson) Edelen, president of the Holly Hills Improvement Association, the public planter is proof of what’s wrong in her south St. Louis neighborhood — and what’s right.

The city erected the concrete planter in the roundabout between Lyle House and Carondelet Park years ago, but no one bothered to maintain it.

“It was just an eyesore,” Edelen says. “It looked like an empty concrete barrier. So we wanted to make it pretty.”

Community members took the planter into their own hands. Now it’s sprouting holly bush, creeping Jenny and even little American flags. Neighbors water it just about every day.

Together, as a neighborhood, Holly Hills keeps the planter alive. 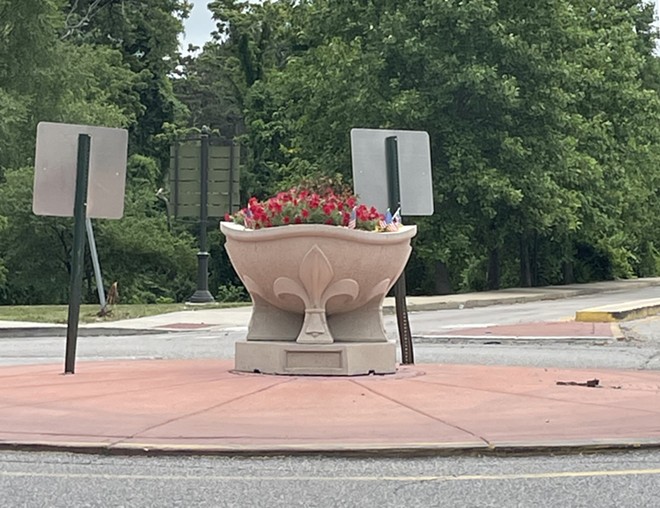 BENJAMIN SIMON
The planter at the roundabout between the Lyle House and Carondelet Park.

But residents say their efforts could use some help — and some hope to create the Holly Hills Special Business District. Medians are overgrown; honeysuckle plants are invading Carondelet Park; drag racers are tormenting the streets; the police don’t respond to urgent calls; and crime, some say, is out of control.

“Some people say that Holly Hills is a little gem,” resident Anna Baldwin says, “but you got to work to keep it that way.”

On Tuesday, August 2, residents of Holly Hills will vote on whether to establish a special business district between Morganford Road, South Grand Boulevard, Loughborough Avenue and Bates Street. If approved, it would create a new property tax that would generate about $400,000 for the neighborhood. Properties would be taxed 65 cents per $100 of assessed value, averaging out to $247 a year for houses worth $200,000.

“We just want to keep [Holly Hills] special,” Edelen says. “That’s it. We want to keep it safe for our kids, and we want to keep our property values because those are our investments.”

But all that is just a recommendation. If the district is approved, Mayor Tishaura Jones will appoint a board of seven people — five homeowners and two renters — who will decide how the money is ultimately used. They would have to hold monthly meetings that are open to the public.

Through the business district, supporters want to hire a full-time police officer who will patrol the streets at night and quickly respond to crime. They also want gates around the six vehicular entrances at Carondelet Park, the third biggest park in the city, a centerpiece of the community and an alleged hot spot for crime.

Some residents, though, question the plan.

For over 20 years, Kevin Prange has lived in Holly Hills. He’s “all for” the beautification efforts, and he understands the concerns about the crime. He has heard gunfire in the park, and no one, he says, wants crime in a community.

But the additional security is a sticking point for him.

Having another police officer manning the streets overnight unsettles Prange. He worries about the possibility of a shootout.

“It feels like our solution to the problems is bringing more force in, to bring more authoritarianism in,” he says. “Having off-duty police officers patrolling with weapons does not feel like it makes things safer — it just brings another armed force into the equation.”

Prange worries about sending the message of "we belong here, others do not." He expressed concern about who will be targeted, especially in a majority white community.

“It means that when someone's patrolling after dark, and they're looking for things that are quote-unquote, ‘out of the ordinary’ — or people that are outsiders — someone who is not white is going to be more suspicious than someone who is white,” Prange says.

It gives Prange the image of a “sundown community,” he says, a historical term used to describe white communities that barred people of color after sundown.

Paul Sager, who previously served as the neighborhood association president, also has questions about the proposal. Sager says he’s 50/50 on the district. He doesn’t have any issues paying more in taxes to complement what the city already provides. The park needs honeysuckle removal, for example, and the city doesn’t offer that service.

But he believes that parts of the special business district are redundant.

“I feel that this district is raising money from taxes on things that we're already paying for in our [city] taxes already,” he says. “So, therefore, I'm paying for the same thing twice. I have a problem with that.

“I think the problem lies in the city and how they're allocating new resources and not having enough manpower to do some of these resources.”


On a weekday afternoon in early July, Holly Hills is quiet. The birds are chirping. Lawn mowers are humming. The bells of the nearby Lutheran church are ringing.

“This is a really special place,” Edelen says. “You're in a very special postage stamp, right now. People that live here, there's a magic to it that you come home to Holly Hills. The kids run the alleys, and they all jump into each other's yards. The eighth graders come and knock on my door to play with my four-year-old son.”

But beneath the quiet lies a sense of unease.

Stories from residents about crime are endless. They talk about everyday carjackings, a man who had his entire garage door smashed, tires stolen from cars, people shot in Carondelet Park, drug paraphernalia stuffed in bushes and cars flying 100 miles per hour down the street.

The St. Louis Metropolitan Police Department is understaffed and stretched thin, they say. Residents note it can take more than an hour for officers to respond to crime.

People feel unsafe and they're moving out of the neighborhood, Edelen says. That's why they are proposing the addition of an overnight police officer. They want community policing, someone who specifically serves their neighborhood, can be tracked on a GPS app and may walk a beat.

Crime often takes place overnight in Carondolet Park, residents say. But that happened less when the city closed the park’s roads during COVID. Alderwoman Anne Schweitzer, who represents the 13th Ward, says there was a distinct difference in the park when the roads were blocked.

“It's not — get out of the park, people aren't wanted here," she says. "With COVID and the gates having been up, it felt like a safer park; it felt cleaner. It was cleaner. It was safer.”

The special business district would also fund beautification and infrastructure. Backers say the district will not replicate the city's services — rather it will add to them. They hope to replace fading signs, install speed bumps, remove honeysuckle plants from the park and trim two miles worth of medians throughout Holly Hills — many of which are overgrown, sprouting weeds a few feet tall and lined with dead branches.

BENJAMIN SIMON
There are two miles of medians in Holly Hills. Many are overgrowing.

Schweitzer says she sees both sides and will support whatever her constituents decide. But she applauded the even 30-30-30 split of funds as a fair representation of the neighborhood’s wants and needs. She called it a “community-driven process.”

“Having this amount of money to spend on the neighborhood will make huge improvements,” she says. “I mean, it just will — if it's done thoughtfully, and in good faith and with community input.”


The proposed special business district in Holly Hills is not an outlier.

These districts have existed for decades throughout the city. The Central West End, for example, has seven special business districts in the neighborhood — each with its own board. Tower Grove South's district, which has operated since 2008, features off-duty St. Louis police patrols, increased alley lighting and additional trash pickup. Soulard has had a special business district since 1994, and it focuses almost solely on security.

Robert Lewis, assistant professor of urban planning and development at Saint Louis University, says a special business district is designed to “enhance” the city’s services, rather than “replace them.” He calls it a good starting place for neighborhoods to raise funds for specific projects.

“They never raise as much money as people think they can,” he says. “But at least it's enough to keep the streets swept and wipe pavements clean and maybe have a security thing or two.”

To Lewis, such districts do something more important than raise money.

“Probably the biggest advantage to any of those to me is it forces areas to get organized, meet together and agree, or disagree, on things,” he says.

But they can’t bring the whole city together.

Lewis says people may not want to pay higher taxes for hyper-local needs in other neighborhoods. As a result, neighborhoods are forced to tax themselves to fix their own problems. It creates inequities between places that can afford a special taxing district and places that cannot. The “haves and the have-nots,” he says.

But in reality, that isn’t the case.

“One of the disappointing factors about special business districts,” Lewis says, “is that we need them at all.”

This story was updated to correct the special business district election date to August 2. We regret the error.
© 2022 Riverfront Times