Harms is telling her story before Roberts' Aug. 2 congressional primary 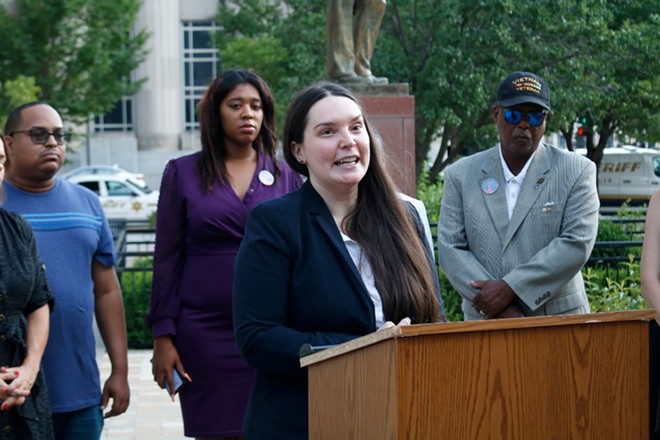 Harms spoke about the assault and a subsequent settlement agreement at a press conference, six days before Roberts will face U.S. Representative Cori Bush (D-St. Louis) in a primary election for Missouri’s First Congressional District.

“I certainly never expected in my entire life that I would be giving a press conference,” Harms told a crowd of about a dozen people in the St. Louis Civil Courts Building. “But here I am. If that's what's necessary, I’m gonna do that. There are a lot of people who can’t speak for a whole lot of reasons.”

In 2015, Harms alleged Roberts groped her at a bar. At the time, she was a law student at Saint Louis University, and Roberts was an assistant circuit attorney with St. Louis city before he was fired as a result of “poor performance.”

Roberts was arrested but never faced charges after the St. Charles County prosecutor’s office deferred prosecution, which means the case was dismissed, but the office reserves the right to refile within the statute of limitations. The case went to St. Charles due to Roberts’ position at the time.

“We were uncertain that we could prove guilt beyond a reasonable doubt based upon the entirety of the evidence," St. Charles prosecuting attorney Lohmar told KSDK in April.

Harms filed suit two years later, and the two eventually reached a $100,000 settlement. She says her attorney and a mediator convinced her that a settlement would work better for her and her family. And she agreed because she “didn’t want to be known for this.”

“Ultimately, had we gone to trial, I’m beyond confident that we would have won,” Harms says. “We just had the evidence. He did not.”

Roberts’ campaign has previously stated that an insurance company reached a settlement agreement with Harms “against his wishes,” and he wanted to go to trial. Roberts and his campaign spokesperson did not immediately respond to the RFT’s request for comment.

“If he feels like he was forced into something, it makes me very sad for him,” Harms says. “Nobody should be forced into a situation that they’re not comfortable with, which I think I’m a really great example of on the other side.”

Harms says she agreed to the $100,000 settlement because she hoped it would be enough for Roberts to “realize this is serious.”

“Now, I know for a lot of people, $100,000 is a huge number,” Harms says. “Apparently for him it was not enough, since he’s still here all these years later coming out and making statements against me.”

The press conference was hosted by the Committee to Organize & Remove Abusers, or CORA, a local political action committee formed a few months after the death of former state representative Cora Faith Walker. Its aims to “prevent persons with [a] history of sexual and domestic violence from being elected (or re-elected) to political office,” according to its website. Federal Election Commission filings show the PAC organized in May.

Harms is one of two women to accuse Roberts of sexual misconduct. Walker accused Roberts of drugging and raping her in 2016, though Roberts never faced charges, and Walker died shortly before Roberts announced his bid for Congress.

Roberts has continuously denied both Harms and Walkers’ claims. In a recent interview with the Missouri Independent, Roberts blamed Bush’s campaign for resurfacing the allegations of his past.

“I can just speak through what I witnessed in real time as far as how these allegations were coming up and who was posting about them,” Roberts told the Independent. “It was very clear some of these folks had actually worked in her office or volunteered for her campaign. Who it is exactly, I couldn’t tell you.”

At first, Harms seemed uneasy as she arrived at a podium to speak; later she explained that she felt compelled to tell her story despite her personal discomfort with attention.

“Being silent about these things is exactly what has allowed all of this to perpetuate in our culture,” Harms says. “So a long time ago, I decided to make it kind of my mission to try to change things to try to make things better for people.”

Chelsea Merta, treasurer and spokesperson for the PAC, called Harms to the podium. Once there, Harms said she didn’t know “what people wanted” her to do, that she “just found out she was doing this.” She asked, “What am I supposed to be doing?”

“You are telling your story,” Merta responded. “What are the parts of the story that Steve got wrong? What has he said that is not true that has happened?

Harms recalled the night the alleged assault occurred. At the former Side Bar on Washington Avenue, on April 16, 2015, she says, she met Roberts after he arrived at the bar with a mutual friend.

About thirty minutes after meeting him, and before she knew his name, Harms says Roberts groped her genitals despite her repeated pleas for him to stop.