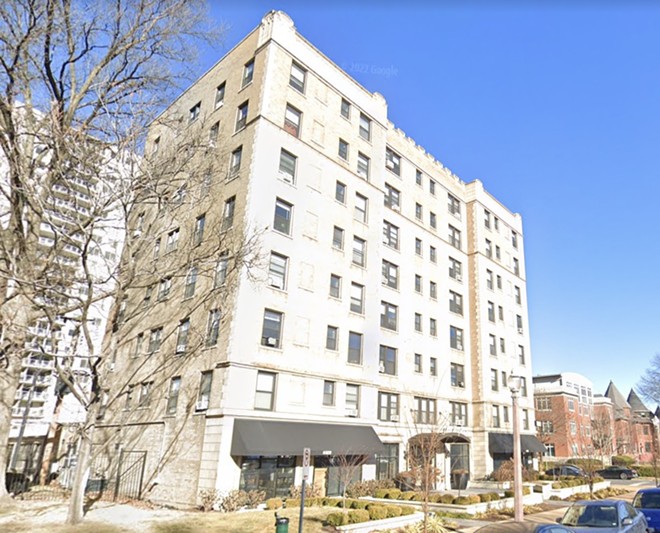 VIA GOOGLE MAPS
The Raphael Apartments located on West Pine Boulevard in the Central West End.

Problems started the day Phillip Clay moved into the Raphael.

He didn’t have heat for nearly a week, he says, and when the heat did come on, the knob on the radiator didn’t work. He didn’t have hot water, and when that was fixed, it was too hot to use. He didn’t get a mail key, some lights didn’t turn on and when his fridge broke, it took about six maintenance requests to fix.

Speaking to a reporter earlier this week, eight months after he moved into the apartment complex, Clay talks for nearly seven minutes straight, without interruption, about the issues.

“So overall, it's just been a hell of a time living here,” he says. VIA ALEX
Water leaks from the ceiling after the recent rain storms at Raphael Apartments.

Dog-friendly and located in the Central West End with reasonable rates, the 75-unit Raphael apartment building is an attractive spot for many renters. But Clay joins a long list of residents who are calling out their landlord. They say dust coats their hallways and the ceiling leaks if it rains enough. They say mysterious liquid spurts out of their sinks and maintenance requests take days, sometimes weeks, to fulfill.

“They count on people not staying here for a long time,” said a resident named Alex, who asked that his full name not be included for fear of repercussions from the company. “A lot of the people here are nursing students or students at the college of pharmacy or they had just graduated college.”

The issues have led the apartment residents to organize and create a renters’ association. They’re active on social media, posting pictures of their apartments and calling for help.

One of the largest concerns on the social media page centers around the elevator. Residents say the elevator is old, with a gate and a door. If the gate doesn’t close all of the way, the elevator won’t move — a problem for people with disabilities, some of whom use wheelchairs. Alex has a dog that cannot use the stairs and he compares the elevator to “Russian roulette.”

Their action has captured the attention of various local stakeholders, including state Representative Kimberly-Ann Collins (D-St. Louis), who visited the apartments on Wednesday morning.

City property records show the building is owned by Gothics Three LLC. State records show the company’s manager since 2019 has been Vic Alston, one of the brothers behind Lux Living, which has become one of the most notorious apartment companies in St. Louis. A Riverfront Times cover story in 2016 revealed complaints from numerous people leasing apartments from what was then called Asprient. Many dealt with similar issues as the Raphael’s tenants. 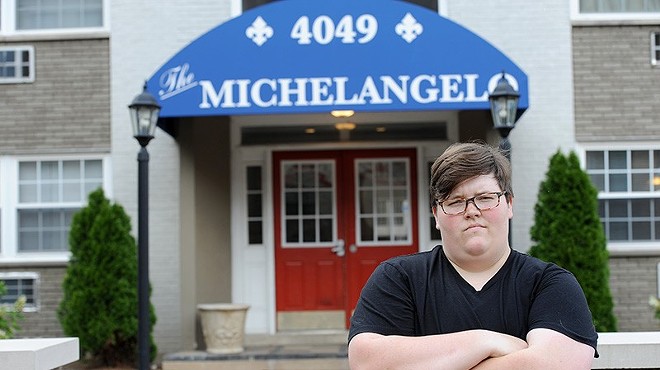 But the company, which now markets rental properties under both Lux Living and STL CityWide, has not slowed down since 2016. In fact, they’ve ramped up. Alston and his brother now own apartments across the city, pouring over $150 million into nearly 1,000 units in DeBaliviere Place, Lafayette Square and Soulard, according to the St. Louis Post-Dispatch. In recent years, public complaints have become loud enough that city officials have threatened to reject their future requests for tax subsidies.

That’s why Clay says he wants people to know about the problems at the Raphael Apartments.

“It's just important to know that because they have other buildings that are being run the same way around the city,” he says.

Ira Berkowitz, the lawyer for Lux Living and designated agent for the Raphael’s ownership group, did not respond to an email and phone call seeking comment. 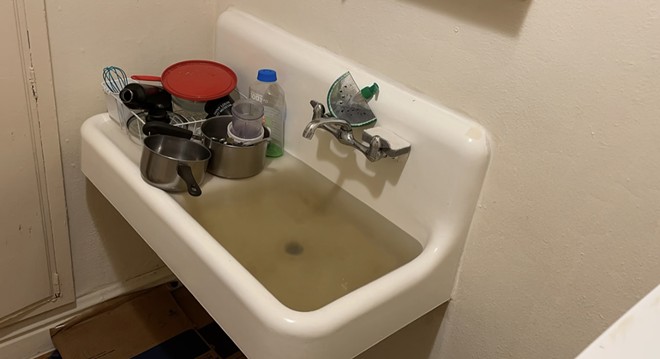 VIA ALEX
A sink overflowing in the Raphael Apartments.

Alex McCoy is a travel nurse who stayed at the Raphael for three months. With 13 travel nurse contracts under her belt, she has lived all across the country, but the Rapheal, she says, was “probably the worst.”

“I can handle a lot, but this is next level,” she says.

Less than two weeks after moving in, McCoy found inches of sewage in the sink and leaking onto the floor. Every time her family showered, the sink spit out more gunk, seeping into the dishwasher and drawers.

McCoy says it took two weeks for the landlords to clean up the mess — and that only happened after she posted negative online reviews.

“I was just appalled at how much they just didn't seem to care at all,” she says. “They didn't really seem to be concerned about the health and safety of me or my family. They didn’t seem concerned about making sure things were done in a correct and timely manner.”

McCoy moved out in April, but the issues have continued. Recently, doctors found elevated lead levels in her one-year-old daughter. McCoy says she’s “99 percent sure it came from the apartment.” Before staying in the Raphael, the little girl had only lived in a Kansas City home built in 1997.

McCoy understands the Raphael is an old building — and a business. She didn’t want anything extravagant, she says. She just didn’t want sewage in her apartment and her daughter to get sick.

“We just wanted a clean, safe place to live,” she says.