St. Louis' Newest Taco Is the Product of Divorce

After a split with his wife, former Tower Taco owner opens Divorce Tacos on Cherokee Street 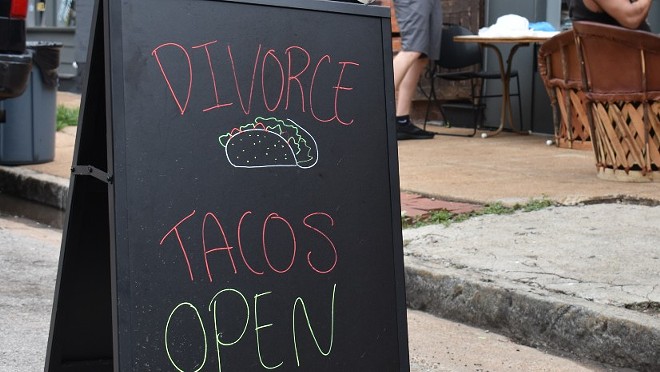 The best new taco in town is the product of divorce.

Twelve years ago, Fernando De La Torré Velasquez owned Tower Taco on Cherokee. His then-wife was the general manager. The business survives to this day. The marriage doesn’t.

A decade ago, he sold Tower Taco after running it for four years and got out of the restaurant game all together.

He worked construction, flipping houses and buying property around Cherokee. He moved into a second floor space above one of the commercial properties he owned, right on the Cherokee main drag.

Then, last year, Fernando and his wife finalized an acrimonious divorce. (Court records show that his ex filed for an order of protection — and, later, his wages were garnished for child support.) His past as a restaurateur was closely linked in his mind to the divorce, which had been his second time one of his marriages hadn't worked. It was a painful reality he couldn’t escape.

So he decided to own it.

The result is Divorce Tacos (3410 California Avenue), which had its soft opening the second to last week in July. Its logo is taco split in two.

Thus far, the restaurant is proving to be a hit.

“The salsa is excellent because it’s not made from canned products. It’s authentic, fresh,” says Cherokee resident Maria, who had already been to Divorce twice in its first week. “Everybody on the street has salsa. But it’s not this salsa.”

Maria is referring to the Divorce Tacos red sauce, which definitely has a kick to it but doesn’t overpower the tacos themselves. 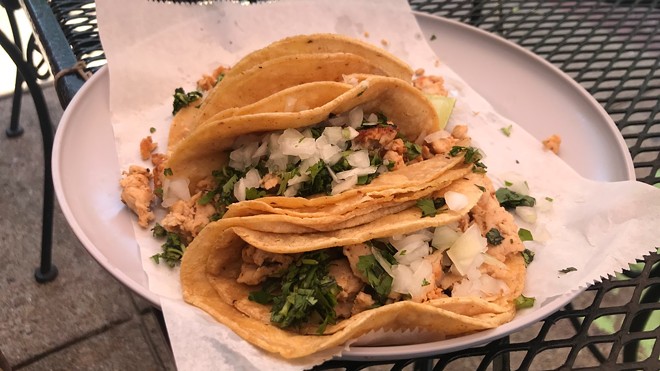 Right now, Divorce Tacos has a little bit of a stereotypical, Kirk Van Houten divorced-dad vibe. The grill is outside. There’s an elegant bar that servers will eventually take orders from but is currently covered in ingredients, empty cups and takeaway boxes. Seating is minimal and ad hoc, all on the sidewalk. This is all a big part of its charm.

Fernando owns the adjoining two buildings, which up until recently were rented out to a clothing store and a different restaurant. Fernando is currently renovating them into dining space. But he didn’t want to wait for renovations to open.

The menu is no nonsense. Ten dollars gets you three tacos with any combination of chicken, beef, steak or chorizo. You can also get the Divorce Tacos, which, somewhat counter intuitively, is a union of all four meats in one. It’s delicious.

The meats are all well-seasoned without being spicy. Onion, cilantro and lime are the only additions on offer, but there’s nothing else that’s needed. 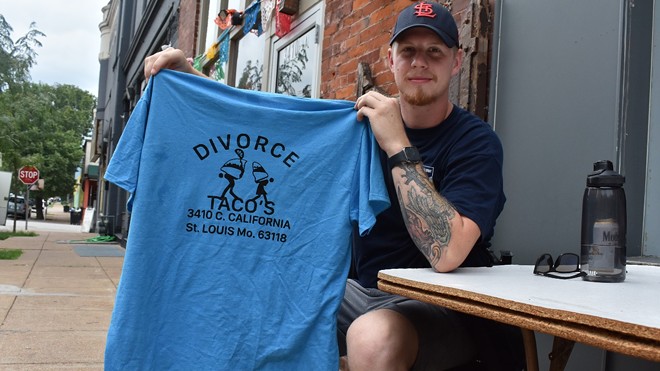 If you go on the right day, enchiladas are on the menu. They have a subtle sweetness to them and are maybe even better than the tacos.

On my second visit to Divorce Tacos, there’s even more of a crowd than the first time. Fernando himself is eating lunch after spending the morning on a roofing project.

I ask him which he likes better: the construction business or the restaurant business.

“Restaurant,” he says, without hesitation. “It’s all about putting good food in front of people and seeing them smile.”

I ask him if there is going to be a third Mrs. De La Torré Velasquez.

Editor's note: This story has been updated and corrected. A previous version contained inaccurate information about the date of De La Torré Velasquez's second divorce. We regret the error.
© 2022 Riverfront Times