A new lawsuit trots out a 19th-century residency rule to keep St. Louis native Mark Kummer off the citywide ballot 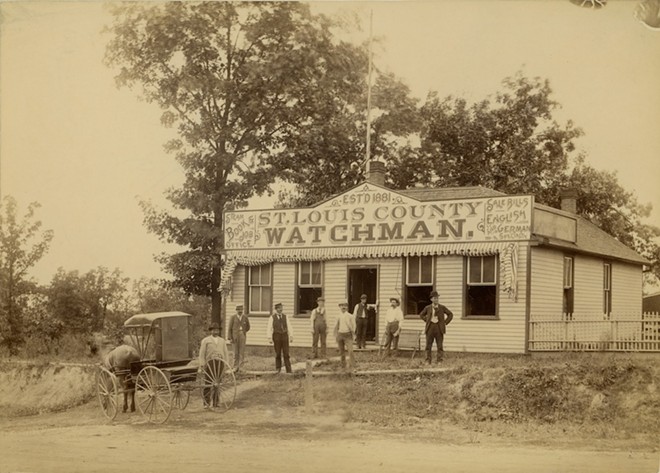 If all else fails to restore the city of St. Louis to its former glory, there's always this sci-fi strategy: Why not turn back the clock a century or two?

Jumping into a time machine makes perfect sense. Today, the city ranks 72nd in population with 298,034 residents. But if everyone would hop back to say, 1890, they'd be transported to a city of St. Louis ranked fifth in the U.S. with a population of 451,770.

What's not to like? The city was half-again larger than today and was larger than Boston. It had more residents than Detroit and New Orleans combined. It had almost nine times more people than Los Angeles. Only New York, Chicago, Philadelphia and Brooklyn were more populous.

Against that backdrop, I suppose it makes perfect sense to dust off the 1893 city charter to address governance issues today. Why not rely upon utopian times for guidance?

So it is that laws of yesteryear determine whether someone qualifies to run for citywide office in 2022 — even though the rules were written 129 years ago. And I do mean "written," since that happened shortly after the invention of the typewriter.

A lawsuit was filed July 20 challenging the eligibility of businessman Mark Kummer to run for president of the Board of Aldermen. The seat became vacant in June when former President Lewis Reed resigned in the wake of his indictment on political-corruption charges.

Three candidates submitted the necessary signatures to make the Tuesday, September 13, ballot for the first round of approval voting for the vacancy. They are Alderman Jack Coatar, Alderwoman Megan Green and Kummer. (The two candidates with the most votes will advance to the general election in November.)

Immediately after the city Board of Elections certified that Kummer had submitted the required number of signatures, Coatar filed the lawsuit arguing that Kummer failed to meet a five-year residency requirement under the charter. The case is pending and might even be resolved by the time you read this.

I don't have a dog in this fight. I've never met Kummer, although I did phone interviews with him and his lawyer in the past week for my KTRS radio show.

Green has long been one of my favorite members of the board. Coatar's a fine guy, albeit a bit too pro-developer for my taste. I know Kummer the least of the three.

There's no reason to take issue with Coatar for filing the lawsuit. A state appellate court ruled in 2014 that election boards could not make rulings on residency. He may have had no choice but to file and was certainly within his rights to do so.

But by any common-sense interpretation of the spirit of residency laws, Kummer deserves a spot on the ballot. St. Louis' 129-year-old rule is outdated and provincial today.

Here's the argument advanced by Coatar, who, unlike me, is a lawyer, according to reporting at stltoday.com:

"Coatar in his suit alleged that Kummer doesn't meet minimum city residency rules set for aldermanic president in the city charter. The charter says the aldermanic president shall have the same qualifications as the mayor. People holding either office 'next before his election' must be a resident of the city for five years and an assessed city taxpayer for two years.

"Coatar in his suit said an 1893 court decision determined that 'next before' means the time period immediately preceding the event in question, in this case an election."

As a layperson, I'll admit that I don't know "next before" from "previously after." I was never good at Scrabble. I do know that in 1893, Green, as a woman, couldn't have voted in a city election, much less run for office.

For his part, Kummer told me that he and his husband live in his childhood home in Compton Heights, having settled there last December. It's his parents' home, but they are away most of the year. Kummer also says he is the sole beneficiary of the trust that owns the house.

Kummer argues that he lived in the same home from 1985 to 1997 and paid taxes on his vehicle for at least two years. He also told me that he was the only one of the three candidates who grew up in St. Louis.

That might be the most ironic part of the story. Have we forgotten the dreaded "St. Louis question" by which perfect strangers are accosted obnoxiously with "Where did you go to high school?"

I hate that question. Green and Coatar are, fortunately, proud residents of the city of St. Louis even though no one here would recognize their high schools. I believe they moved here in the early 2000s from New York and Chicago, respectively.

Meanwhile, Kummer's answer is "Clayton High School." He says his parents were divorced and though he attended school across the county border, he also spent at least half of his time in the city.

With apologies to President Grover Cleveland's followers, I just don't understand how this native St. Louisan — whose apparent sin was to move away for 15 years to pursue a successful business and academic career — is somehow a carpetbagger today. What are we, Mayberry?

Consider that the residency rules for the city were enacted when most people didn't own telephones. The few that existed, mounted on walls, didn't even have dials. Telecommunications have evolved just a bit, and so should laws related to the consequence of distance from home.

Kummer's presumed disconnection from St. Louis came when he went to Boston for an MIT fellowship in 2020. I don't know what train-passenger service was like in 1893, but I do know that folks mostly got around by horse and buggy. The first Model T Ford went on sale nearly two decades later. How long do you suppose it took to travel to Boston?

Look, if the judge finds Kummer legally blew up his residency with travels to faraway places, so be it. But by any common-sense test, a native of the city having lived in it for two-thirds of his 44 years on the planet ought to be able to run for office here.

I do understand how sensitive people in the city can be on the topic of residency. Many will take umbrage that a county resident like me — living fully two miles outside the city line — should weigh in at all.

Never mind that I founded the Riverfront Times in the city, tragically (from my point of view) before any of these three candidates was born. And I still pay the city's earnings tax.

So, even though I live an hour's carriage ride across the county border today, I'd like to suggest that the city modernize itself on the subject of residency rules.

After all, the 1904 World's Fair is right around the corner.