Congratulations to Eric For Getting Donald Trump's Endorsement 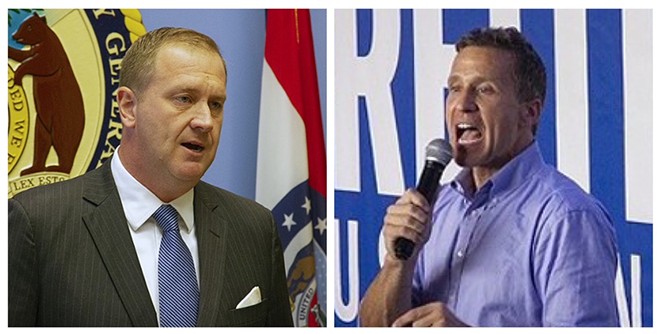 Both photos by Danny Wicentowski
Two men named Eric who both want to be the next Senator from Missouri.

After former President Donald Trump announced this morning that he would be endorsing a candidate in Missouri's crowded GOP primary for U.S. Senate, politicos throughout the state wondered if the lucky Republican would be Eric Schmitt or Eric Greitens.

In a message sent out from his official Save America PAC, Trump announced that he would be throwing his weight behind "ERIC." All capital letters. No last name.

"There is a BIG Election in the Great State of Missouri, and we must send a MAGA Champion and True Warrior to the U.S. Senate, someone who will fight for Border Security, Election Integrity, our Military and Great Veterans, together with having a powerful toughness on Crime and the Border," the message from Trump begins.

It continues, "We need a person who will not back down to the Radical Left Lunatics who are destroying our Country. I trust the Great People of Missouri, on this one, to make up their own minds, much as they did when they gave me landslide victories in the 2016 and 2020 Elections."

Finally, the 45th president of the United States gave a master class in reaching a fork in the road and going straight: "I am therefore proud to announce that ERIC has my Complete and Total Endorsement!"

As bizarre as the announcement is, perhaps it should not come as a surprise.

Greitens, who might be a natural for Trump’s endorsement thanks to his temperament and desperate attempts to claim outsider status, hasn't been faring well in the polls and Trump, after seeing some of his endorsed candidates go down in flames, has increasingly only backed "surefire" winners.

But endorsing Schmitt, despite his status as a frontrunner, would have been a big ask for Trump, as he has been known to hold a grudge from time to time.

Just this weekend Trump was dragging Schmitt campaign operatives over a poll that found Trump’s 2024 GOP support at a sad 42% in the Show Me State. Media outlets favorable to Trump have claimed that the poll undercounted voters who support the former president in an effort to inflate Schmitt's results.

Greitens, in a highly optimistic move, sent out a tweet thanking the president for his ringing endorsement.


I’m honored to receive President Trump’s endorsement. From the beginning, I’ve been the true MAGA Champion fighting against the RINO establishment backing Schmitt.

President Trump said it best when he characterized Schmitt’s campaign as ‘great dishonesty in politics.’

"I’m honored to receive President Trump’s endorsement. From the beginning, I’ve been the true MAGA Champion fighting against the RINO establishment backing Schmitt," the former governor of Missouri wrote on Twitter.

A few minutes later, Schmitt also thanked the president for the same endorsement.


🚨ENDORSEMENT—PRESIDENT TRUMP🚨I’m grateful for President Trump’s endorsement. As the only America First candidate who has actually fought for election integrity, border security & against the Left’s indoctrination of our kids—I’ll take that fight to the Senate to SAVE AMERICA!

The current Missouri attorney general wrote on twitter, "I’m grateful for President Trump’s endorsement. As the only America First candidate who has actually fought for election integrity, border security & against the Left’s indoctrination of our kids—I’ll take that fight to the Senate to SAVE AMERICA!"