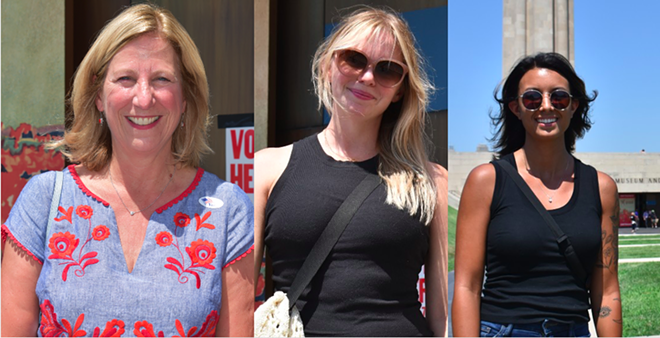 Ryan Krull
Kansas City residents Leslie Tomlinson, Jessica Thatch and Sammy Aleman say they are nervous about the vote on abortion protections happening across the border in Kansas.

Kansas City, Missouri, residents voting at the iconic World War I Museum and Memorial were casting ballots for a whole host of local and state primary races today. But for many, an issue not on their ballot was front of mind: the vote in Kansas about whether that state should have a constitutional right to abortion.

Right now, the Planned Parenthood in Overland Park, Kansas, is the closest abortion provider on the western side of the state. It is about a 25-minute drive from the heart of downtown Kansas City. But if Kansas were to outlaw the procedure, women seeking an abortion would have to drive to the abortion clinic in southern Illinois four hours away just across the river from St. Louis.

"It's kind of difficult to not be able to do anything about it," says Sammy Aleman who just moved from the Kansas side of the border to Missouri and was about to vote here for the first time. She says she's been posting a lot on social media to try to encourage her friends to get out to vote. 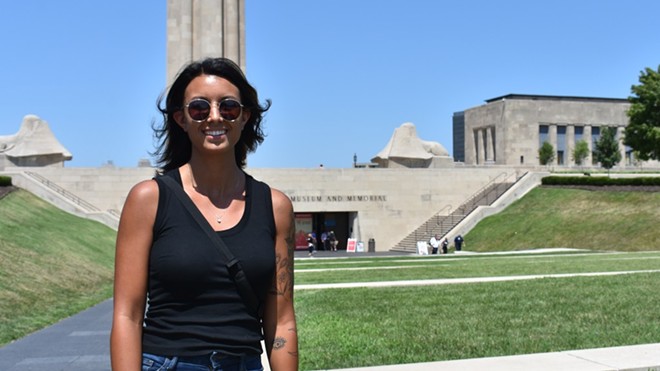 Kansas City resident Jessica Thatch, also on her way to cast a ballot at the museum, adds that, "With Missouri's ban on abortion, it would be helpful for women to be able to access health care in the state of Kansas, being that we’re so close by."

Thatch adds that since a widening of abortion access seems doomed for the moment at the federal level, the vote just across the state line is important because it's "a chance to actually hear from the populace."

"It's very scary," says Lauryn Guidry, voting in the Wendell Phillips neighborhood of Kansas City, Missouri. "At least we can drive 20 minutes out of state and receive that type of care, but now that's on the line." 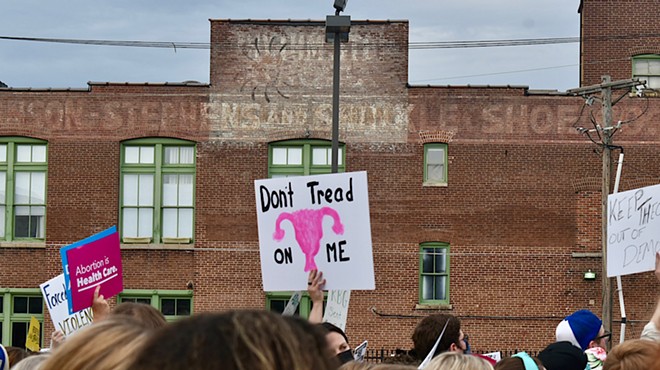 About a mile away from the World War I Museum and Memorial, at a polling place in the Westside South neighborhood, a block away from the Boulevard Brewing Company, Robert Hurtado, David Smith and Vince Hernandez are having an improvised tailgate outside a polling place while passing out literature for Democrats in local races.

With the Doobie Brothers jamming in the background, all three express varying levels of concern about the proposed amendment in Kansas and how it opens up the state to what they see as possible government overreach.

Hernandez doesn’t like abortion but even more so, "I don't like the government telling us what to do with our bodies." 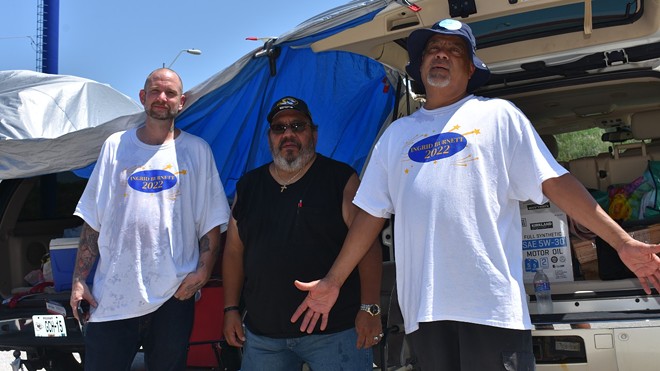 The roots of today's vote lie in 2015 when the Kansas state legislature banned a “dilation and evacuation” abortion, a procedure that is not all that common and is usually performed in the second trimester.

The Kansas State Supreme Court struck down the law in 2019. But in addition to blocking that specific law, the court also went further and enshrined into law a right to an abortion.

That meant that the only way to pass laws restricting or banning abortion was through a constitutional amendment, which is exactly what Kansans are voting on.

The vote is looking like it will be tighter than expected.

Depending on how it goes, Kansas could establish itself as what Wall Street Journal reporter Laura Kusisto called “an island of access in the south and Midwest.” Or the vote could continue the trend of other states bordering Missouri by restricting access to abortion. It is important to note that the amendment itself would not restrict the procedure, however it would open the door for the Republican-controlled legislature to pass such restrictions.

"If Kansas were to ban, facilities in Overland Park and Wichita that are critical destinations for women traveling from Missouri, Oklahoma and Texas would close," says Caitlin Myers an economics professor at Middlebury College who studies reproductive policies. "Taking into account projected bans throughout the Midwest, women in the region would face even greater travel distances and many would not be able to reach a provider at all as a result." 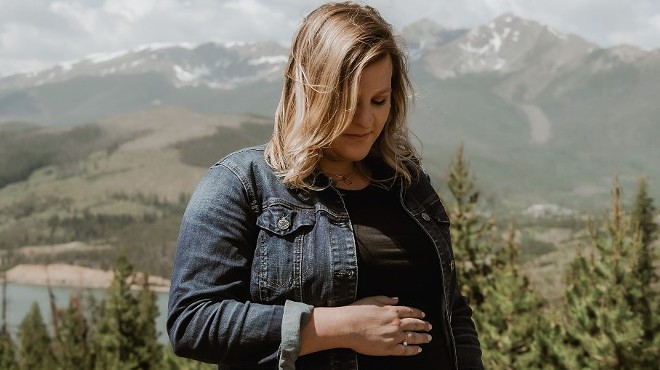 Pregnant Women Can't Get Divorced in Missouri: The state's divorce law has come under more scrutiny since the overturning of Roe v. Wade

The proposed amendment is called "Value Them Both." Many have criticized the wording of the amendment as being intentionally confusing — as well as containing a typo in the word "pregnancy." A yes vote would remove abortion protections. A no vote would keep them enshrined into law.

Some have accused anti-abortion activists of distributing messaging that is intentionally misleading.

"What has been bothering me is that the things I've been seeing about the ‘yes’ is that they've been copying what the ‘no’ folks have been saying," says Aleman, the Kansas City voter. "It's very weird I'm not sure what they're trying to do."

"They're just making stuff up, saying there's going to be a thousand percent increase in abortions," says Leslie Tomlinson, a Kansas City resident who had just cast a ballot at the World War I Memorial and is keeping her fingers crossed for a "no" outcome in Kansas. "We're nervous."

Tension has been high on both sides of the border in recent weeks.

A Catholic Church in Overland Park, Kansas, which is in the Kansas City metro area, was spray painted with “My Body, My Choice” last month — a sign of the tension in the air.

"It's pretty controversial. I have friends on both sides," said Danielle, a Kansas resident who was hanging out in the Crown Center Square in Kansas City after casting her ballot in the morning. "I'm a Republican, but I voted no." She added that a Catholic church near here had been graffitied as well.

Her friend, Kristi, adds that "On the Nextdoor app you constantly see people fighting about it because they are stealing each other's yard signs. It's pretty split across the board." 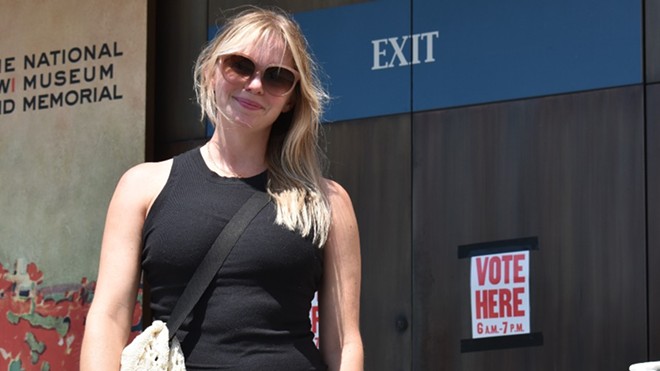 Ryan Krull
Kansas City resident Jessica Thatch outside the World War I Museum and Memorial, where she voted.

Given the high emotions surrounding the vote, neither woman wanted to give a last name.

A campaign worker for state Representative Yolanda Young was outside a polling place in Kansas City’s Wendell Phillips neighborhood. She says that there has been so much buzz about the abortion vote, even on the Missouri side, that people have been coming up to her confused as to why it wasn't on their ballot.

"People have been asking today if they can vote on it," she says. "I say, 'No, we missed our chance.'"

UPDATE: As of 8:32 p.m., the amendment to remove abortion protections in Kansas is projected to fail.
© 2022 Riverfront Times