The St. Louis congresswoman won her seat in a major upset two years ago — and now seems certain to hold it 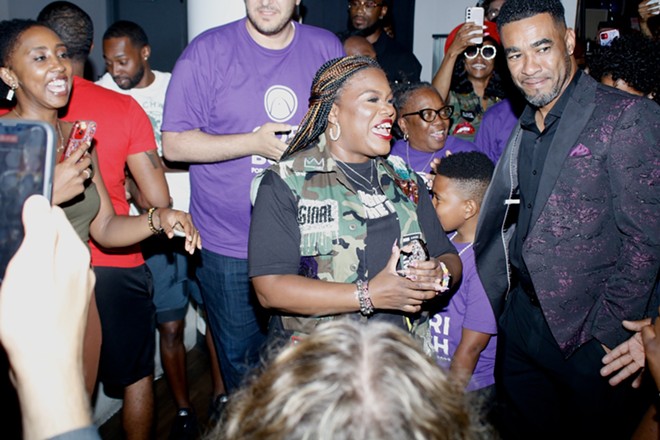 Two years ago heading into the Democratic primary, Cori Bush was considered the underdog, an activist who was a longshot in her quest to take down longtime Congressman William Lacy Clay Jr.

What a difference two years makes.

Bush was beating Roberts with 71 percent of voters in the city, according to preliminary results from the St. Louis Board of Election Commissioners, and 68 percent of voters in the county, according to the county elections board. That makes for a formidable lead — and not enough ballots uncounted for Roberts to make them up. CNN called the race for Bush just before 9:30 p.m.

The winner of the First Congressional District Democratic primary is almost certainly a shoo-in for reelection. In 2020, even as a political neophyte, Bush won 78.8 percent of the vote. This fall, she faces Andrew Jones Jr, a Republican who has previously run for mayor and will again be a longshot in this race.

At Bush's watch party at House of Soul in downtown St. Louis, an exuberant congresswoman danced with her constituents. Upon her arrival, one man got a little over-excited. "The queen is here! The queen is here!" he shouted.

Roberts, the scion of a prominent St. Louis family, vowed to run a competitive race, and attracted support from Clay's former coalition of mainstream Democrats and Black voters. But he was dogged by news stories about settlements he reached with two different women who accused him of assault and unable to gain momentum.

His watch party, at the Drury Inn off Hampton Avenue, had a calmer vibe. His supporters told reporters they wanted less talk, more action. Based on tonight's results, their criticisms appear to be the minority.

The RFT's Monica Obradovic contributed to this report.
© 2022 Riverfront Times