I had never had a Cuban sandwich in St. Louis before dining at Havana's in late July. It's not for lack of trying; I'd eaten many sandwiches that called themselves Cubanos, featuring pressed bread stuffed with pork, ham, mustard and pickles, but having finally experienced Tamara Landeiro's glorious dish, I can now say, with absolute certainty, that this was my first time. While the others that came before it can be classified as riffs on or homages to the Cubano, Landeiro's is truth — the quintessence and what all others are trying to be when they stack all the right ingredients on Cuban-esque bread yet somehow fall short.

There are several reasons for this. The first centers on the bread, a vital marker of authenticity that simply cannot be subbed out or phoned in. Landeiro is uncompromising in this department, procuring hers from the iconic La Segunda Central Bakery in Tampa, Florida, a fourth-generation bakeshop that has been making authentic Cuban bread since 1915. Fluffy on the inside and crusty on the outside so that it develops the perfect crispness when pressed, it's the basis of Cubano sandwiches for Florida's large Cuban community and no different than what you'd get in Havana.

Landeiro's other key component is the pork, a slow-cooked meat so outrageously delicious you'd likely choose it over any of the city's excellent barbecue pulled pork in a game of "would you rather." Slow-cooked with garlic, orange bitters and spices for 12 hours every single day, Havana's meat is where your mind goes when asked to describe what pork tastes like. Piled onto the traditional Cuban bread, with ham, molten Swiss cheese, tangy mustard and pickles, it's not just a sandwich; it's a revelation.

Mabel Suen
Tamera Landeiro is the chef and owner of Havana’s Cusine.

St. Louis might have never experienced such glory were it not for the game of chess. Back home in Cuba, Landeiro was doing everything she could to support her daughter Thalia's prodigy-level talent; by the age of seven, Thalia was showing signs of becoming a major force in the game and was winning continent-wide championships by the time she was 13. Feeling that there were better opportunities outside of Cuba, Landeiro moved the family to St. Louis in 2014 so that her daughter could study at the city's world-renowned chess club, where she has since gone on to become a woman grandmaster, international champion and a silver medalist with the U.S. Olympic chess team.

Landeiro was thrilled with the opportunities the move to St. Louis afforded her daughter, but she was less thrilled with the city's Cuban food scene. Craving the flavors she and her family had left behind, she began sketching out plans for a restaurant of her own while working as a materials and planning manager at an area factory. Eventually, her dream of a restaurant became too strong to deny, so she contacted the Hispanic Chamber of Commerce to help her bring her vision to life.

Havana's began as a stall at the Soulard Farmers Market about three years ago with the goal of growing into a brick-and-mortar restaurant. However, when the pandemic put the future of indoor dining in question, Landeiro decided to launch Havana's as a food truck instead, serving her first customers in March of 2020. But she never lost sight of her storefront dreams and was finally able to put down roots in a permanent restaurant in the heart of downtown's Washington Avenue district last October.

With a permanent space, Landeiro is now able to make Havana's into the restaurant she has always wanted — and what St. Louis has always needed. Her Cuban sandwich may be the restaurant's signature, but Landeiro shows that she can make anything magical between two slices of bread. Like the Cuban, her Pan Con Lechon features the succulent, slow-cooked pork; here, she shows it off in its purest form, simply piled atop the Cuban bread and topped with semi-cooked white onions. It's the pulled pork of your dreams.


The Turbano sandwich is another excellent offering; similar to the Cuban, the sandwich pairs the signature bread with ham, Swiss, mustard and pickles but subs in shockingly juicy turkey for the pork. An accompanying garlic aioli adds subtly sweet richness to the dish.

Havana's also serves a selection of medianoche sandwiches, which are similar to the Cuban save for a slightly different bread. Here, the base is medianoche bread, a slightly fluffier, sweeter eggy bread that's similar to brioche and pairs stunningly with the Cuban sandwich ingredients. Somehow, when pressed and mingled with the juicy pork, the medianoche develops a magical sheen that makes it seem as if the bread has been glazed in butter.

In addition to sandwiches, Havana's offers two different platters. Mojo-roasted pork is the same pork served on the Cuban sandwiches, just in its purest, most awe-inspiring form. Equally outstanding is Landeiro's ropa vieja, a succulent braised beef that is a national dish of Cuba. Here, the shredded, tomato-and-bell-pepper-flavored meat is piled onto a platter alongside black beans, smashed yucca and plantains. Like the pork, you can also get the ropa vieja on a sandwich, though there is something wonderful about experiencing it unadorned. 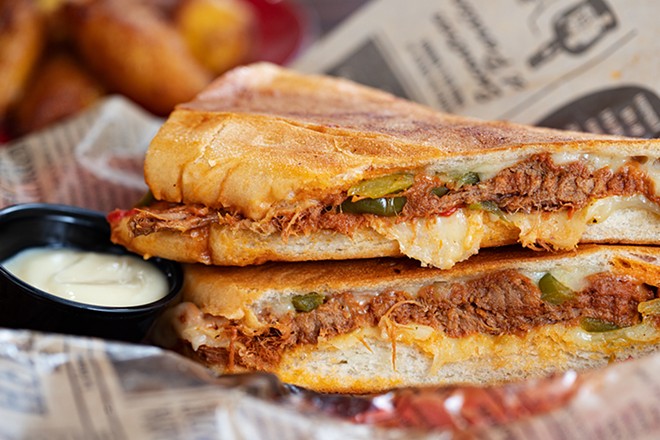 For appetizers, Landeiro serves outstanding croquettes, a mozzarella-stick-shaped fritter made from a creamy ham-and-flour concoction with a texture that resembles whipped potatoes. Equally stunning are her Cuban-style empanadas, which pair a slightly thick, hand-pie-style dough with juicy, seasoned ground beef that is the texture of a Caribbean sloppy Joe. It's yet another example of Landeiro's undeniable talent for encasing impossibly juicy meat in carbs — the hope we all need in these dark times.

Landeiro says she's been preparing for Havana's ever since she was a little girl — that her grandmother would often regale her with stories of her great-grandfather who owned a casual little takeout spot in 1950s Cuba. Growing up when such private enterprises were outlawed, such an endeavor seemed like a magical dream to Landeiro, one she never stopped believing in no matter where life took her. Thankfully, her path led to St. Louis, where we're the ones now pinching ourselves, wondering if such a masterpiece of Cuban sandwich-making is actually real. The answer is yes.