Shocking everyone, the revived trolley did not bash any cars or break down on its inaugural trip

DANIEL HILL
Oh Loop Trolley, how we missed you.

To the surprise of a whole metro area, the Loop Trolley actually managed to make it through its entire first ride without incident Thursday afternoon, traveling its full 2.2-mile route without once breaking down or ramming a parked car.

Even more surprising, the old-timey mode of transportation actually saw some ridership, likely due to the fact that it is now free to board, making those paying $27 a pop for a weekly bus pass just to get to work look like suckers. Though nearly half the people on that first trip were Metro employees and officials, it still made for a thrilling sight.

The unkillable trolley lurched back to life at 11 a.m. after three years of inactivity. The money-losing operation was plagued by mechanical problems; it was only revived after federal officials threatened their local counterparts with the possibility that up to $37 million in federal grants could be clawed back. At that point, Bi-State Development, which runs bus and MetroLink service (and has struggled with that recently), took over  the project.

Elizabeth Engelmeyer and her young children, Chase and Josie, were first in line to board at the Pageant stop. They'd only ridden the trolley once before, on its last day in service in December 2019, and were excited to take it for a spin again.

"We rode it whenever it closed two or three years ago, and we stood right here,"  Engelmeyer explains. "And so when we heard that it was going to be starting back up, we thought we need to be here for the first day again."

Clad in matching t-shirts bearing the slogan "Together we can do anything #Familygoals," the St. Louis-based clan had recently traveled to Pigeon Forge, Tennessee, where they rode a sky gondola. Engelmeyer says that she and her children are pretty into unconventional forms of transportation, to which the children agree. 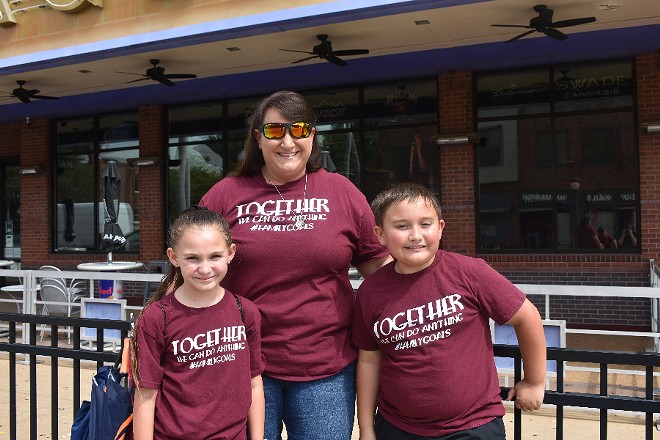 "I like that the trolley is powered by electric," Chase says.

"I like it because you can see lots of stuff and just ride it all around," adds Josie.

The three climbed onto the trolley upon its arrival at 11:06 a.m., welcomed by two Metro employees and six officials who were already aboard. As the trolley traveled west along Delmar, it picked up two pairs of grandparents and their grandchildren before reversing course and heading east. Inconceivably, it passed through the area across from the Pageant — the site of many a bashed parked car — without incident.

The trolley lumbered its way through all of the stops on the way to the History Museum without picking anyone up, but upon its arrival, a small crowd was waiting, with seven more hopping on. At this point it sat for a brief spell — built into its schedule now are 10-minute "operator breaks" when it completes its route — during which time its lack of air-conditioning and the attendant discomfort that brings became more pronounced.

But soon enough passengers were in the wind again, rocketing down the line at speeds approaching a lightning-fast ..... 25 miles per hour. This was as packed as things would get during the first trip of the trolley's new life — on the way back we lost more passengers than we gained when the Metro officials stepped out at the trolley's headquarters. Traversing the full route roundtrip took about an hour. 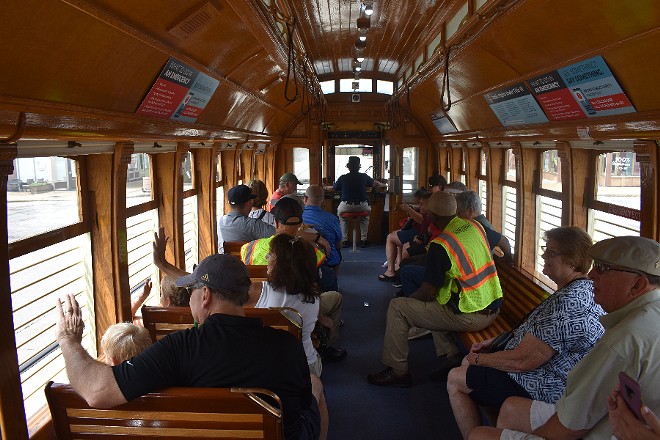 DANIEL HILL
Throngs of riders on the trolley's first trip back.

At present there is just one tram in operation, with plans to get a second running in the spring. According to one Metro official who was on board, they're just waiting on parts to make that happen, at which time the trolleys will appear at the stops twice as frequently.

Some might suggest that doubling the number of trolleys on the tracks is asking for trouble, considering that would necessarily double the likelihood of disaster. But those people would be forgetting one thing: The Loop Trolley took a completely successful ride along its full route today, with no calamities or casualties, on a sunny afternoon with ridership in the teens — thus silencing its critics forever.

Or, you know, at least for a few days.