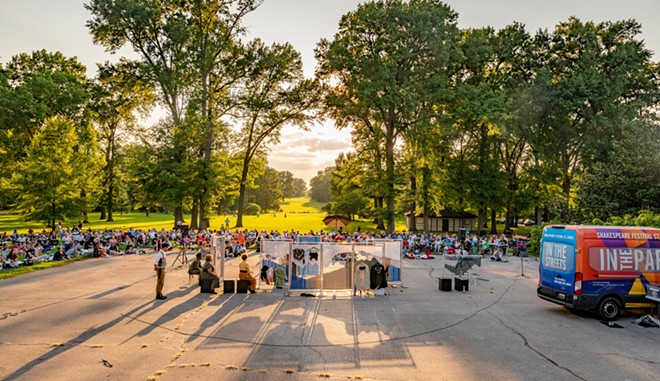 Some are born to the stage. Others find their ways there by chance.

Tre’von Griffith developed an interest in theater growing up in north city. At eight, he had his first professional role in the Black Rep’s production of Joe Turner's Come and Gone.

University City’s Brandin Vaughn might have never found the industry. A fashion designer and owner of a Cherokee Street store, Brandin Vaughn Collection, he got tapped for costume design for the Black Rep’s Spell No. 7 that ran in early 2020 (before being cut off by the pandemic).

This summer, the two creatives, with their distinct paths, have come together for the production of St. Louis Shakespeare Festival’s A Midsummer Night’s Dream, which will stop in 24 area parks. The tour kicked off August 2 and runs through August 27. The free, 90-minute show starts at 6:30 p.m. every Tuesday through Sunday.

The play follows the wedding preparations for Theseus, Duke of Athens, to Hippolyta, an Amazon queen. Four lovers, including Theseus’ daughter, embark into the forest and run afoul of a dispute between fairy royalty as well as the trickster fairy Puck. Hilarity ensues but, as one of the comedies, all ends in marriage.

Griffith, a musician and composer also known as Tre G, serves as director and Vaughn as the costume designer. The producing artistic director is Tom Ridgely.

The show has an all-Black company of local actors. That cast, the show’s accessibility and the way that theater has been a creative home for Griffith and Vaughn are all related and feed into why each jumped at the opportunity to take part.
click to enlarge 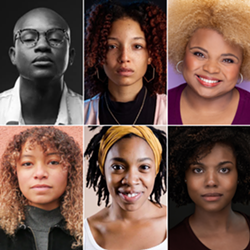 
“The cool thing [is] going into the different communities in St. Louis, engaging with them in ways that probably haven’t been done before,” Griffith says. “Also, it’s about representation.”

“Coming up as a child, I didn’t have a Black designer as a role model,” Vaughn adds. “That wasn’t there. So I’ll be the catalyst for that. … If you dream it, you can do it.”

To bring this dream to life, Griffith decided on afro-futurist — an aesthetic that imagines a future of Black excellence through the use of technology and often includes sci-fi elements — as the unifying concept. He says that it worked well for this show because so much time is spent in the dream world, a setting with plenty of creative room.

“I want to be able to tell stories that are representative to the world that we live in now,” he says.

That theme came out strongest in the costumes and the music. Griffith drew from a variety of music styles, including R&B and gospel, and unifies them with a “future synth” aesthetic and a driving beat.

For the costumes, Vaughn used colorful African fabrics for the human characters to give the actors a vibrant pop on stage. Then for the fairies, he went full futuristic, creating helmets out of motherboards, floppy disks and piping. He focused on differentiating cast members and making sure the costumes wouldn’t smother the cast performing outside in St. Louis’ muggy heat.

Some favorite pieces include a 24-panel puffer vest with a pleated cape/wings on the back and a mirrored, asymmetrical corset with jagged edges that reflects light across the stage.

“Costumes really help tell the story,” Vaughn says. “Shakespeare’s Midsummer Night’s Dream is a story that we’ve seen over and over again. But I had the opportunity to show my vision of the story when I read the script, [and] that’s the most important part to me.”

Though Griffith didn’t change anything about the text of the play, he says that he also did a kind of interpretation to make everyone watching feel welcomed and able to digest the action on stage. That process began with digging into the text itself, then creating mood boards and finally talking with the creative team about how to bring the vision to life.

“A lot of times, when you say Shakespeare, you don’t necessarily think it is for everyone,” Griffith says. “And it really is.”

It’s not only this team’s specific approach that makes this a show for anyone, Griffith says. It’s inherent in the story, which features a character, Hermia, who wishes to marry for love rather than the man her father has picked.

“This generation, we believe in doing what’s right, going against those social norms,” Griffith says. “Everyone wanted her to marry this person … and she wanted to follow her heart.”