The park is threatened by a proposed silica mine 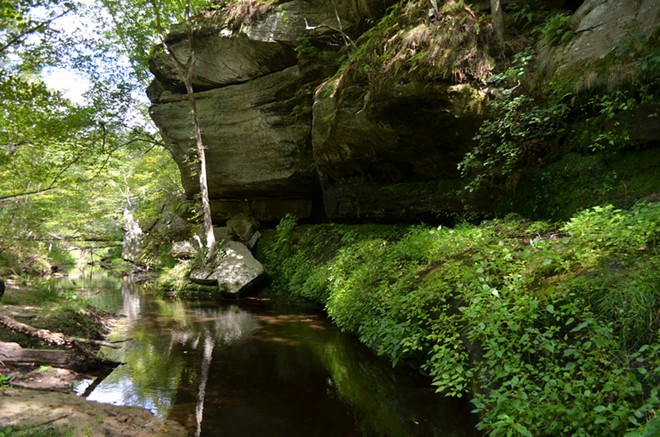 kelseylynnw1.
Hawn State Park is under threat from a proposed nearby silica mine.

As an outdoor photographer and wilderness guide living in St. Louis, I spend weekends working in one of the most ecologically sensitive and biodiverse regions of the world: the Missouri Ozarks.

One of my favorites is Hawn State Park in Ste. Genevieve County, and I’m not alone in that. State records show more than 123,000 visitors in 2020; 80 percent of its annual visitors are from the St. Louis area. It’s a special place with a special story. Park namesake and public school teacher Helen Hawn lived the American dream.

Purchasing 12 tracts of land in the 1930s, she left her property to future generations to respect and protect it. Due to the lush native shortleaf pine forest, Hawn State Park's nearly 5,000 acres of unique terrain resemble a destination more likely to be found in Colorado than Missouri.

But Hawn is in trouble. The Missouri Department of Natural Resources just approved a massive new open pit mine in between Hawn State Park and Hickory Canyons Natural Area along the scenic Highway 32 corridor. This is a pristine, primordial place untouched by glaciers during the Ice Age where sensitive plants and animals from Canada took refuge and visitors can still see the ancient four-toed salamander slither across moist ferns. Despite being tasked with protecting parklands, the Department of Natural Resources did not perform an environmental study before approving NextGen Silica's mining permit.


A recent citizen's complaint alleges NextGen Silica deceived the public on their permit application, referencing a ghost company as an associate. NextGen Silica demands unsupervised, unregulated access to the local trillion-gallon St. Francois aquifer, one of the largest freshwater underground reservoirs in the world. A similar, now defunct sand mine operation in nearby Brewer, Missouri, closed after their aquifer was depleted and local residents had to truck water in at their own expense. Sand mines in Iowa and Wisconsin permanently contaminated local groundwater from toxic industrial solvents used to wash the pulverized bedrock on-site.

Hawn State Park's clean air, clean water, quiet solitude, and dark skies at night are threatened by the NextGen Silica mine approved by the DNR.

NextGen still has one more hurdle to clear, though some claim the company is already clearing land for its mine, the county commission barred mining operations “within half a mile from schools, towns, churches, parks or wells and a quarter of a mile from homes, caves and protected streams,” explained Allison Kite in the Missouri Independent. The NextGen silica mine would violate the ordinance, so NextGen is suing the county saying the ordinance is preempted by state law.

If St. Louisans become more informed of this important issue regarding property we all own, perhaps the necessary steps to protect Hawn State Park and other special places like it can be achieved moving forward together.

At the RFT, we welcome well-reasoned essays on topics of local interest. Contact [email protected] if you've got something to say.
© 2022 Riverfront Times