TOMMY CHIMS
A month after celebrating its opening, Cookies has closed temporarily.

A month after its grand opening, Cookies dispensary — located at 11088 New Halls Ferry Road — has closed its doors temporarily.

The move comes after an attempted burglary at the medical marijuana dispensary. Around 5:15 a.m., police reported that the suspects drove a car through the building in an attempt to get inside. No arrests were made, but it is being investigated as a burglary. Extensive damage was done to the property which prompted the closure. 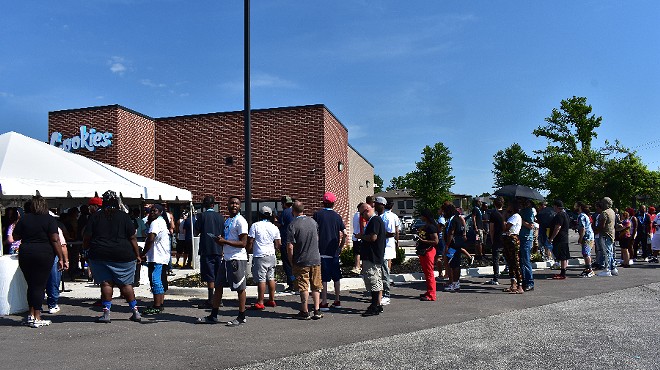 Cookies' Grand Opening Brings Long Lines, Potent Cannabis to St. Louis: Some customers camped out for days to be first in line for the dispensary's big day


Swade dispensary in south St. Louis also had an attempted break-in, where thieves were caught on a video obtained by Fox 2 trying to kick the glass in. Those suspects never made it in the building.

Police haven't said if anything was stolen from the Cookies dispensary yet. There's no word on when the store will reopen, and the RFT could not reach the dispensary on Wednesday morning for comment.