From December 2019 to October 2021, "tens of thousands" of stolen catalytic converters were transported to Arkansas as part of scheme 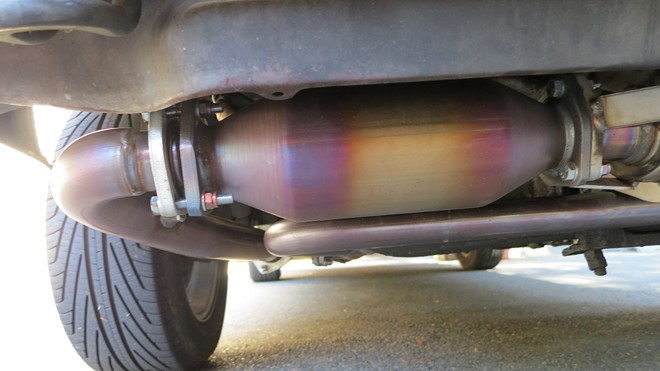 
The seventh member of a million-dollar, catalytic converter theft ring pleaded guilty to her role in the criminal enterprise last week in federal court.

Danielle Ice, 34, of Columbia, Missouri, pleaded guilty to one count of conspiracy, a felony.

Danielle and her husband, Leslie, 37, were relatively small players in the scheme that involved the theft and transportation across state lines of more than a million dollars worth of catalytic converters.

According to an indictment, the husband and wife stole about 50 catalytic converters and sold them to Evan Marshall, 24, of Rogersville, near Springfield, Missouri. Marshall owned a business there that was ostensibly a recycling company but which was a cover to buy, sell and transport the stolen converters.

Court documents say that throughout the Springfield area, the Ices photographed catalytic converters still attached to cars and then texted the photos to Marshall who would then say if they were worth stealing or not.

If Marshall gave the OK, Leslie would sever the converter using a battery powered reciprocating saw.

Marshall paid the Ices approximately $20,000 for the converters they stole for him.

In January 2021, Marshall even gave Danielle $1,500 so she could pay her husband's bail so he could continue stealing converters.

Every two to three weeks from December 2019 to October 2021, Marshall transported between 800 and 1,200 catalytic converters to a property in Mountain Home, Arkansas, about 20 miles south of the Missouri border.

In total, Marshall transported "tens of thousands" of converters to Arkansas. The converters had a combined value of more than $1 million.

Theft of catalytic converters has increased across the country because the car part contains precious metals.

The converter scheme began to unravel in July 2021 when Marshall bought $1,030 of converters from an undercover agent.

However, when texting, Marshall was seemingly more open to discuss the provenance of his converters, which he called "cats."

He texted one of his co-conspirators: "just FYI I’m gone till Tuesday but I’ve got guys around that can get you cash and get the cats if needed."

Another text message read, "Stole a bunch of cats off kearny btw, if you find em you can just take them from him [laughing emoji]."

The Ices, Marshall, and four other individuals were indicted in January of this year.

The other six members of the scheme, including Leslie Ice and Marshall, pleaded guilty earlier this summer. Danielle pleaded guilty on Tuesday. She faces up to five years in federal prison.