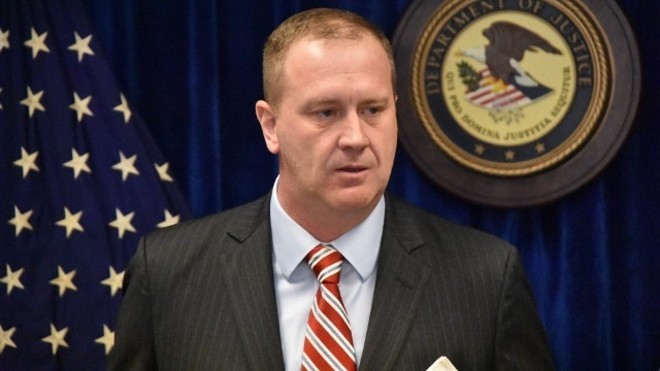 DOYLE MURPHY
Eric Schmitt will duke it out with the Democrat nominee for the U.S. Senate seat in November.

It happened without a press release, but on November 3, 2020, Eric Schmitt stepped aside as Missouri attorney general to join the Army.

That would be the insurrectionist army of Donald Trump. Since the moment President Joe Biden defeated Trump, Schmitt has politicized his state office to a degree unprecedented in modern history.

Elections have consequences, and it can be expected — although not excused — that Missouri’s highest law enforcement official might allow political views to seep into some decisions. That’s not Civics 101 — ideally, the attorney general should maintain an apolitical posture in all matters — but in Real World 101, it is increasingly the rule.

Schmitt’s convincing win in the recent Republican primary for U.S. Senate was made possible only by his wormy worship of Trump. But to achieve it, Schmitt was decidedly derelict in his duty to the people of Missouri.

And yes, that should include those of us who didn’t vote for him. It is true that Schmitt possesses a law degree from Saint Louis University. Perhaps he might make a fine lawyer in the wild, although he’s left behind no paper trail to suggest as much since his graduation in 2000. The only way Schmitt is setting foot in a law library in 2022 is if he’s there for a photo op to supervise the arrest of a librarian for distributing forbidden material.

The man is a politician, full stop.

But that doesn’t begin to rationalize the degree to which Schmitt has abused his office for political gain since Trump’s defeat. And let’s be clear: That was the landmark event marking Schmitt’s transition from a garden-variety Republican attorney general to the shameless MAGA servant that he has become today.

Governor Mike Parson appointed Schmitt as attorney general in 2018 after Missouri voters tragically sent Senator Josh Hawley scurrying like a rodent to Washington, D.C. In Schmitt’s first two years in office, he participated in some noxious right-wing stuff, such as signing onto a brief defending workplace discrimination against the LGBTQ community in a case before the U.S. Supreme Court.

And who can forget how he became an international laughingstock for trying to sue China for causing the COVID-19 pandemic? That’s the joke that keeps on giving, as there was a fine Post-Dispatch column by Tony Messenger last week exposing Schmitt’s hypocrisy on the subject of masks.

But after Trump’s loss, Schmitt discovered a new hobby in which he hadn’t indulged previously: Suing the federal government — or hopping on other states’ lawsuits — at every conceivable opportunity.

It began with a full-throated embrace of Trump’s Big Lie that the election was stolen. Apparently, Schmitt had decided quietly to accept an officer’s commission in the insurrection army.

Schmitt didn’t stop at participating in the frivolous abuse of the judicial system. He took the lead in authoring the amicus brief joined by 16 other states in support of Texas Attorney General Ken Paxton’s failed attempt to invalidate elections in Pennsylvania, Georgia, Michigan and Wisconsin. As if he wrote it.

Even the partisan U.S. Supreme Court tossed the lawsuit like garbage. Missouri should have billed Schmitt’s campaign or the state Republican Party for every second of legal time and every cent of expense incurred by Schmitt’s office.

Brushing off the pathetic failure in the legal system, Schmitt apparently was an accessory to Trump in the insurrection itself. He was vice chair of the Republican Attorneys General Association on January 5 when it sent out robocalls urging MAGA faithful to attend Trump’s fateful January 6 rally in Washington, D.C.

“At 1 p.m., we will march to the Capitol building and call on Congress to stop the steal,” said the voice on the recording sent out by the group in which Schmitt played a top leadership role. Of course, he wasn’t quite enough of a leader that he would have any idea about such a call.

Schmitt issued a cowardly denial — an absolutely implausible one — pretending he had no knowledge of such a robocall. Right, it must have been some intern who decided to invite millions of MAGA followers to the nation’s Capitol “to stop the steal.” How would any RAGA top official know about such a thing?

A Schmitt spokesman bravely denounced the violence at the ensuing January 6 riot at the Capitol but couldn’t go quite so far as to denounce the RAGA robocall. Of course not. Four months later, Schmitt became RAGA chairman.

One year after that, Schmitt joined his fellow insurrectionist BFF — Texas’ eternally indicted Paxton — and their Republican colleagues from Alabama and Montana in withdrawing from membership of the bipartisan National Association of Attorneys General.

It seems as if the organization — founded in 1907 — has suddenly developed a “leftward shift” in the worldview of insurrectionists. It also seems that of the remaining 26 Republican state attorneys general in the nation, 22 continue to participate in the bipartisan group.

In case you were thinking that Schmitt is just a reflection of the times, think about those 22 Republican counterparts who did not choose to follow his partisan path. Schmitt is a full-fledged, unpatriotic member of the MAGA insurrectionist army.

What does that mean to Missouri and its abused taxpayers? Plenty. Schmitt has taken a blowtorch to the notion that the state attorney general should represent the state as a whole — and not just those who voted for him.

Space doesn’t permit a full list here of the lawsuits filed or joined by Schmitt that have nothing to do with serving as Missouri’s top law enforcement official. It’s stunning even by the standards of the MAGA age.

Within five months of Biden’s election, Schmitt had abused the platform — and often the resources — of his office to oppose statehood for Washington, D.C.; Biden’s initial executive order on climate change; revocation of the Keystone XL pipeline; a moratorium on future gas and oil leasing and drilling permits of federal lands; use of a “social cost of carbon” analysis on natural gas pipelines; and pretty much any other environmental measure this side of “drill, baby, drill!”

Schmitt has attempted to impose his version of Missouri’s will upon the people of California for wanting an assault-weapons ban. He has interjected the state in a number of other states’ abortion-related policies. Most recently, Schmitt has decided Missouri should battle investment giant Morningstar over what he claims are its “woke ESG investing” practices.

Really? In case you’re not up on ESG, it stands for “Environmental, Social and Governance.” Schmitt has a big problem with at least two of those words. And apparently convinced he had caused China’s President Xi Jinping to cower in fear for two years over being served by the state of Missouri, Schmitt has decided to bring executives of one of the largest investment firms to their knees for the alleged crime of wokeness.

That’s pretty sad. And so is Eric Schmitt, formerly known as a moderately conservative legislator, who has found political success by selling his political soul to the insurrectionists who would destroy American democracy.

It’s terrifying that Missouri is expected to add another such unfit member to the U.S Senate. On the other hand, there’s the small consolation — which hopefully won’t come to pass — that if Schmitt gets elected, it will create a job opening in Jefferson City. It’s hard to imagine a worse attorney general.