Missourians against the death penalty vow to fight for Kevin Johnson

"We need to move into the next phase of holding McCulloch accountable for decades of prosecutorial misconduct, racial biases, & targeting of the poor &marginalized. For many, including the #StLouis6 the lingering atrocities of his reign persist.” #ClemencyForKJ - @WhurDeyDoDatAt pic.twitter.com/Bdgvcq9zol

— Missourians for Alternatives to the Death Penalty (@MADPMO) August 25, 2022

The Missouri Supreme Court on Wednesday set an execution date for Kevin Johnson, who, at 19 years old, shot and killed a Kirkwood police officer in 2005. His execution is set for November 29.

Johnson, now 36, received his sentence from the St. Louis County circuit court in 2008 after prosecution by former St. Louis County Prosecuting Attorney Robert McCulloch. Over the years, his legal team filed multiple appeals and requests for rehearings, though the court overruled each.

A growing campaign has backed Johnson, often referred to by his nickname KJ. His supporters claim his trial was riddled with missteps and racial bias, and Johnson was 19 at the time of his crime. In addition, Johnson’s supporters want to abolish the death sentence.

Missourians for Alternatives to the Death Penalty have launched a clemency campaign for Johnson.

“This is an atrocity that should not happen in our society,” Michelle Smith, director of community engagement and outreach, says. “We can do better.”

John’s trial for the death of Kirkwood Police Sergeant William McEntee hung 10-2 in favor of convicting him of second-degree murder. There’s no question whether Johnson killed McEntee; he admitted so in 2007.

Rather, Johnson has since alleged that prosecutors failed to present evidence about his childhood neglect and abuse to the jury.  His father was incarcerated for murder when Johnson was 16, and his mother dealt with a crack addiction. Johnson and his brother occasionally ate roaches off the floor when neglected by their mother, according to Johnson's lawyers.

Johnson’s supporters assert that his case was also tainted by racial bias at the hands of McCulloch, who critics claim secured Johnson’s conviction by disproportionately excusing Black jurors. McCulloch was, at times, accused of being racist during his 28-year regime as the county’s elected prosecutor, especially after he issued a non-indictment of Michael Brown’s killer, Darren Wilson.

Johnson grew up in Meacham Park, a primarily Black neighborhood that has been systemically stomped on since being founded in 1892. Annexed by Kirkwood in 1992, residents had to relocate to make way for the large shopping center containing the Kirkwood Walmart and Target. What’s left of the Meacham Park after development, including the construction of Interstate 44, is surrounded by Kirkwood — a primarily white neighborhood that’s one of the most affluent areas of the state. Its encompassment of Meacham Park brought with it decades of racial terror of police, Smith says. 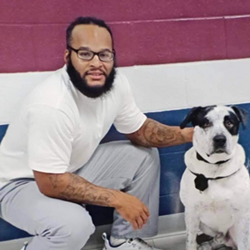 Via Missourians for Alternatives to the Death Penalty
Kevin Johnson

“It has a lot to do with how and why KJ ended up where he is,” Smith said in an interview with the RFT earlier this month. “Their community has been terrorized for so many years.”

But most outrage surrounding Johnson’s predicament stems from the circumstances that led up to Johnson’s killing of McEntee.

On July 5, 2005, Kirkwood Police arrived in Johnson’s neighborhood of Meacham Park. They’d been looking for him for several weeks after he violated his misdemeanor probation.

Johnson watched them from a home he lived in with his grandparents and 12-year-old brother Bam-Bam. Officers lurked around his other grandparents’ house nearby, where Johnson’s Ford Explorer was parked, according to court documents.

After a few moments, Johnson's grandmother Patricia started screaming. His brother Bam-Bam had a congenital heart defect and, at the time of this incident, was suffering from a seizure. Johnson testified that he watched McEntee prevent his mother from attending to Bam-Bam as she cried and screamed. His brother was later pronounced dead at a hospital.

Later that night, McEntee arrived in Meacham Park to respond to a dispatch of someone shooting fireworks. What exactly transpired next is unknown, as witnesses have provided varying accounts to law enforcement, but ultimately Johnson saw McEntee and shot him multiple times. Witnesses heard him say, “You killed my brother.”

McEntee had the strength to drive a couple hundred feet after Johnson shot him but hit a tree. He then got out of his vehicle, and while he was on his hands and knees, Johnson shot him two more times.

McEntee was 43 years old and a father of three. Johnson shot him seven times.

Johnson’s supporters don’t deny he should be punished, but “it’s one thing to punish someone, it’s another thing to take their life away,” Nimrod Chapel, an attorney and president of the Missouri NAACP, said Thursday.

One of Johnson’s lawyers, in a press conference on Thursday, said the office of St. Louis County Prosecuting Attorney Wesley Bell submitted a letter to the court on July 11, stating that it is in the process of engaging a special prosecutor to investigate whether Johnson’s conviction and death sentence were affected by unfair racial bias.

Lawyer Rebecca Woodman elaborated to say there is a pending application on Johnson’s behalf with the Conviction and Incident Review Unit in Bell’s office. She says the office has done a preliminary review of that application and determined Johnson’s case warrants an investigation. However, someone on the team has a conflict of interest with the application because they worked on Johnson’s case.

Woodman says they’re in the process of obtaining a special prosecutor to investigate and pursue Johnson’s claims.

“It would be unconscionable for Kevin to be executed without a thorough investigation into the claims that are pending,” Woodman says.

There are currently 18 people on death row in Missouri. Six are from St. Louis.

Missourians for Alternatives to the Death Penalty ask people who want to support Johnson to sign a petition in opposition of his execution.
© 2022 Riverfront Times