Barbara Hall is trying to scrape together money for a private autopsy of her son, who died under mysterious circumstances 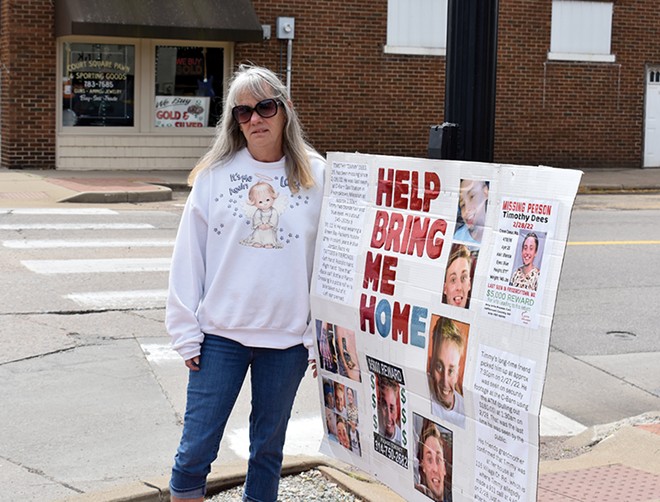 RYAN KRULL
Since March, Barbara Hall's presence in Fredericktown has been a protest and a vigil.

Barbara Hall says she only has two days to figure out what caused her son's death in Madison County in February.

Hall is the mother of Timmy Dees, a 26-year-old who went missing in February in Madison County, Missouri. His body was found five months later in July. Now, Hall says that her son is going to be buried Wednesday even though the results of an autopsy have not yet been released.

In May, the RFT reported on Dees' mysterious death as well as the strange demises of other young people in the Fredericktown area of Madison County. 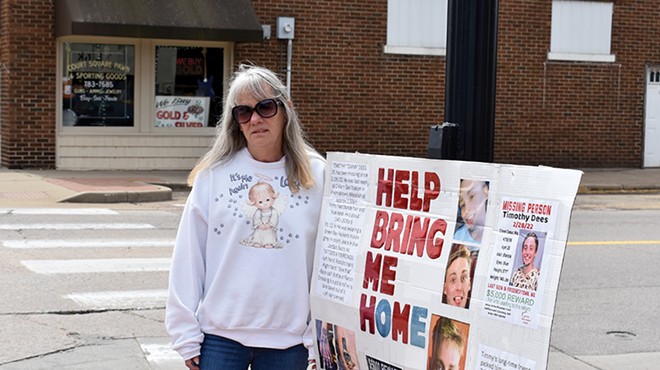 
Hall made herself a fixture in front of the Fredericktown courthouse, and placed signs all around the small city's downtown. Her presence was both a protest and a vigil. She hoped to keep her son in the minds of local residents and law enforcement. She organized searches around an alleged drug house on Village Creek Drive in Fredericktown, where a 911 call was made from Dees' phone on the night he disappeared.

When the RFT talked to Hall in May, she'd come to grips with the reality that her son was almost certainly dead. She just wanted to find his body to know how he'd died.

On July 21, nearly five months after his disappearance, searchers finally recovered his body in a dry creek bed only 200 yards from the house on Village Creek Drive.

The Daily Journal described the remains as "skeletal."

Hall says her son was found without his phone or his shoes, which she finds alarming. She says the fact that he didn't stop and put his shoes on before leaving the house means that someone was chasing him.

The 911 call made from Dees' phone was received by Madison County Sheriff's Department dispatch around 4:40 a.m. According to the dispatcher, a frantic voice on the other end said, "Someone is chasing me." But since the call wasn't recorded, no one knows for sure if the voice belonged to Dees or if someone else was calling from his phone.

Hall is also convinced her son's phone is out there, waiting to be found.

"If we find the phone, the phone will tell us a lot," she says.

Hall says an autopsy was performed, but results from it have not been released.

It is not clear if the autopsy was done by the coroner in Madison County or with a medical examiner in a nearby jurisdiction. The Madison County Coroner was not in the office when the RFT called. Despite subsequent calls to the Missouri Highway Patrol, the St. Francis County Medical Examiner, and the St. Louis County Medical Examiner, the RFT was unable to determine if the autopsy had been completed or if any results from it had been released.

Hall, who has been distrustful of law enforcement's investigation into her son's death since its early days, is raising money for a private pathologist to perform an independent examination.

But the clock is ticking.

The funeral home that has possession of Dees' body says they are going to perform the burial this Wednesday, at Dees' father's behest.

Hall says that Dees' father believes that burying their son will allow Timmy and their family to be at peace.

"He's not at peace if we don't have answers for him," Hall says.

The funeral home tells the RFT they can't comment on the private matter.

“[The funeral director] is going to call me ... Wednesday," Hall says. "And if I don't have the money to get another autopsy done, he's going to release Timmy's body to his dad.

"I just want to know what happened to him," Hall says.