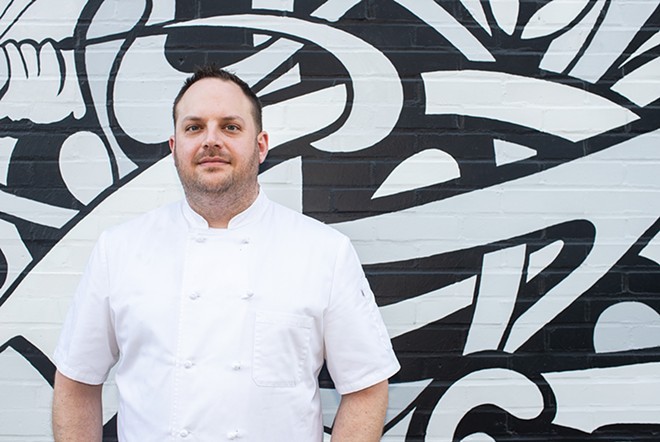 Mabel Suen
Chef Ben Grupe is no longer involved with Tempus, the restaurant he has been the face of since its inception.

A major shakeup is underway at one of St. Louis' most acclaimed newer restaurants: Ben Grupe, a James Beard-nominated chef and culinary Olympian, is no longer involved with Tempus (4370 Manchester Avenue, 314-349-2878), the restaurant where he has served as the face and visionary since its inception. In the wake of his departure, the restaurant  in the city's Grove neighborhood has temporarily closed, although its owner says it will reopen in the coming weeks.

A spokesperson for Tempus confirmed the news, which was first reported by St. Louis Post-Dispatch restaurant critic Ian Froeb, noting simply that Grupe is no longer involved with the restaurant.

"[Grupe] was brought on as Chief Operator and the face of Tempus at its inception, but it has always been owned by Peter Brickler," the spokesperson says.

In a statement shared by the restaurant's spokesperson, Brickler has the following to say about Grupe's departure and the future of the restaurant:

"With the end of summer approaching, we have decided to postpone service for the next few weeks to take care of ourselves, spend time with our families and restructure and refresh the restaurant. We plan to reopen in the fall and look forward to sharing updates with you along the way."

Following an illustrious culinary career that was heavily steeped in the country club and competition circuit, Grupe opened Tempus in the fall of 2020 as an elegant yet approachable neighborhood spot. Though the restaurant was rooted in his vast culinary experience and the classical techniques he'd honed over the years, he envisioned Tempus as a more everyday sort of place, serving thoughtful interpretations of classic dishes.

After the pandemic forced Tempus to operate as a takeout-only restaurant for its first year, the dining room finally opened in November 2021 to much acclaim. USA Today honored Tempus as one of its "10 Best New Restaurants in America," and Grupe earned an "Emerging Chef" semifinalist nod from the James Beard Foundation this past February. (Grupe was previously a JBF "Best Chef: Midwest" nominee for his work at Elaia.)

Tempus' spokesperson also confirmed that the restaurant's sous chef, Justin Bell, is no longer with the restaurant. Prior to coming on at Tempus, Bell worked alongside chef Rob Connoley at the now-shuttered Squatters Cafe and his much-heralded Ozark restaurant, Bulrush.

The restaurant's owner, Brickler, is less well-known. His Facebook profile notes that, in addition to his role at Tempus since April 2019, Brickler is an associate with the network marketing e-commerce company Bonvera. A LinkedIn profile shows that he was previously a bartender/manager at the Grand Center restaurant Lucha.

The Riverfront Times has reached out to Grupe, who confirmed that he was no longer involved with Tempus but did not comment further. We will update this developing story as more information becomes available.