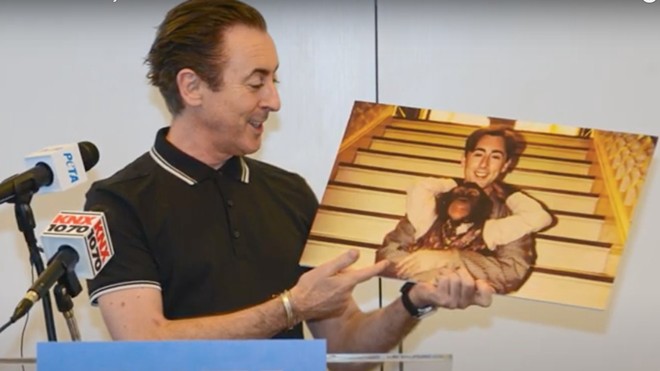 The story of Tonka the Chimp begins in Hollywood in the 1990s and ends happily at a wildlife sanctuary in Florida. However, between California and the Sunshine State, the chimp's journey includes a bizarre chapter that unfolded in Festus, Missouri. There his owner went to great lengths to hide the animal from authorities, going so far as to fake his death.

The actor narrates a PSA for PETA, which recounts the animal-rights nonprofit's battle to free Tonka from the cramped basement cage where the "fugitive" chimp was confined.

Tonka was less fortunate. Once he retired from acting, the chimp wound up living in the care of the now-defunct Missouri Primate Foundation. PETA sued over conditions there, saying the breeding compound kept chimps confined in squalid circumstances before funneling them into show business and the exotic-pet trade.

The foundation later turned over its chimps to a woman named Tonia Haddix, who housed Tonka at her home near Festus. However, when a judge ordered Haddix to hand over Tonka and other animals, Haddix claimed Tonka was dead.

She couldn't provide any proof, saying that her husband had burned the chimp's body after he died of natural causes.

Haddix even wept over the loss to St. Louis Public Radio last winter, saying she loved Tonka more than her own two children.

That proof came a few months ago, via a surreptitiously recorded phone call obtained by PETA. In it, Haddix was recorded telling a documentary producer, "If he was not a wanted fugitive, do you realize you can make a million dollars off of TikTok off of him?"

In June, U.S. Marshals raided Haddix's home in the Lake of the Ozarks and found Tonka in a tiny cage in her basement.

Tonka is now able to live out the rest of his days at Save the Chimps sanctuary in Fort Pierce, Florida, north of Palm Beach.

The animal reportedly needs to lose some weight after his time in confinement, but PETA says he's on the road to recovery.