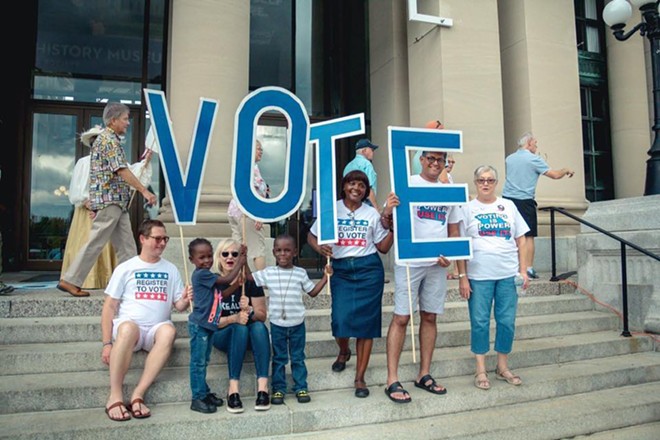 COURTESY JOAN LIPKIN
At the 2018 Midterms Matter event, people showed how important it is to vote.

The most artsy voter registration event in St. Louis has returned.

Dance the Vote STL will present Midterms Matter on Saturday, September 24, from 12:30 to 3 p.m. The nonpartisan event will feature St. Louis dance companies, including the St. Louis Academy of Dance and Skystone Dance Ensemble, doing interpretive dances around the act of voting.

“The theme for the return would be to promote the joy of voting and highlight the excitement about this precious right of citizenship,” says Joan Lipkin, producing artistic director of Dance the Vote.

The event, which takes place outside of the Missouri History Museum (5700 Lindell Boulevard, 314-746-4599), will also include motivational speakers, a voter-registration drive, food trucks, a DJ and representatives from at least 18 area nonprofits with information about voting.

Lipkin says focusing on the midterm elections is essential. The event is designed to “help the general public understand why midterms matter,” she says. “And that what happens every two years in terms of electing people for Congress and the Senate in many ways affects people’s lives more than the presidential election, which is a much larger and more glamorous event.”

Denise Lieberman, the director and general counsel of the Missouri Voter Protection Coalition, will be at the event to share information about the new law. Her statewide nonpartisan voter protection agency, along with the NAACP, the League of Women Voters and others, has filed two lawsuits against the new law, which took effect in late August.

“We’ve requested House Bill 1878 be blocked prior to the November elections and request that the court expedite its review to ensure that voters retain all of their rights to cast a ballot this November,” Lieberman says. 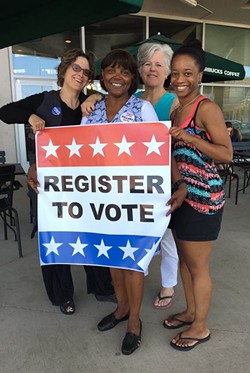 COURTESY JOAN LIPKIN
In addition to seeing dance troupes perform, you can also register to vote.
Despite that battle, the event will prepare voters to meet the current law’s requirements. Lieberman plans to share information about a nonpartisan hotline, 866-OUR-VOTE, that will connect callers with trained advocates who can help them navigate the new rules. She will also tell them about ID access clinics that help people obtain the valid state IDs now required to vote.

The event coincides with National Disability Voter Registration Week and will highlight the disenfranchisement of disabled Americans. Many of the new voter ID rules, such as requiring a valid state ID, disenfranchise those who are homebound, do not drive, or otherwise would not normally have a state ID.

“One of the things that we’re trying to do is also amplify the importance of inclusion,” Lipkin says.

Co-producer and choreographer Ashley Tate will teach everyone an inclusive and accessible dance, while Katie Rodriguez Banister of Access-4-All will read a poem about the importance of voting.

“Our most vulnerable citizens have the least amount of help available to them,” says Lieberman, explaining that HB 1878 also restricts who can register people to vote. “It’s a double whammy for our community’s most vulnerable voters, and that’s why we need as many people as possible to get involved to keep participation in our democracy alive.”

The last time the event was held was in 2018, when it attracted more than 1,000 attendees. Lipkin hopes for a similar-sized or even larger turnout this time around so folks can take “Missouri’s largest photo to promote the midterms.” The event starts at 12:30, and at 1 p.m. a drone will fly overhead to take a photo of everyone. Lipkin encourages people to arrive by 1 p.m. to be in the photo.

Dance the Vote recently partnered with Central Library to do a project called Voters of St. Louis. While the project is still in its nascent stages, it will have a soft launch at the event and could include a step-and-repeat with a fun voter- and library-themed backdrop.

The party includes activities for younger folks, too, including wearable signs that say “Future Voter” for kids to decorate.