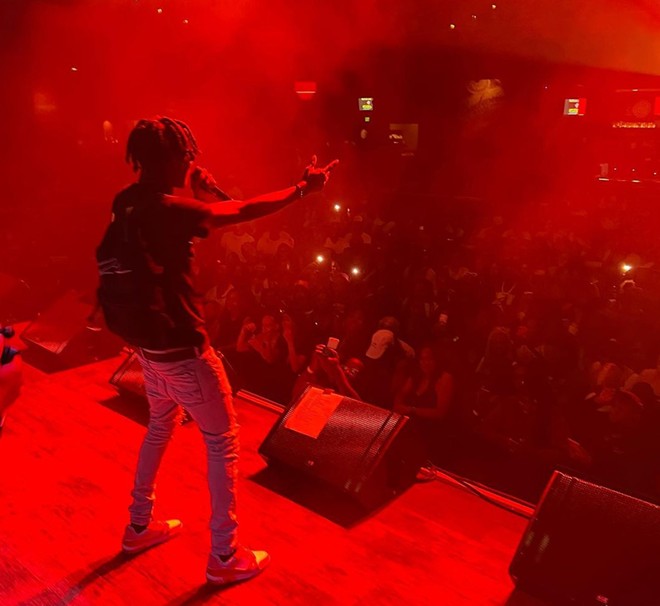 VIA INSTAGRAM
Karma2zz, a local rapper who has blasted onto the St. Louis rap scene, performs at a recent concert.

He grabs rocks from the ground and fiddles with them between his fingers. He pulls at his baby-blue ripped jeans, taps his cell phone and responds to texts. His eyes hide behind his bangs, darting left, right, anywhere but the interviewer.

Twoos, better known as rapper Karma2zz, isn’t being rude. He is thoughtful and reflective in his answers. He just seems fidgety and maybe even a little nervous. He is 20 years old after all, a kid trying to make sense of his newfound local fame. The music, the attention –– it is all so new and it happened so fast. He recorded his first studio song just last year, but already, he has skyrocketed to 1 million streams on Apple Music.

“It's crazy,” Twoos says. “I straight wouldn't even think that I wouldn’t need a job because of rap.”

This is what stands out to his manager, Dony’a Blackson, who started working with Twoos over one month ago. “Humbleness,” she says. “He’s humble, quiet and he doesn’t really know his full worth yet.”

She points to a recent brunch trip, when a few fans crowded behind him, whispering. It was Karma2zz and they wanted a picture. “[Twoos] was about as excited as them,” she says. “Like, he wanted to take a picture with them.”

Growing up in St. Louis, Twoos didn't plan to become a rapper. His mom worked at banks and his dad was a truck driver. Twoos wanted to be a firefighter. He ran track in high school and wanted to attend Ranken Technical College but he didn’t get his FAFSA set up correctly. As he figured out the next steps, he worked at a pizza shop and Jack in the Box.

He bounced around from zip code to zip code across the St. Louis area. He was always the new kid, he says, before he settled down in The Ville as a teenager.

Back then Twoos was a “hothead" — until a life-altering experience. During Twoos’ junior year of high school, his best friend died. “We were evil together,” he says. “When he died, it kind of shocked me, like, ‘Damn, we ain't bulletproof.’  We out here acting crazy. And when he died, it was like, ‘Damn, that could have been me.’”

Then, in 2020, after graduating from high school, he found music. He was just “playing around with it,” he says. “I ain’t see a future in it.”

He recorded his first songs in a closet with Apple headphones –– the only quiet place in the house where the dog wouldn’t disturb him. He would make short 30-second previews, posting some of them on the music app Triller.

From that closet, Twoos released a song called “Chicago." And the song sounds like came from a closet. His voice is far away, echoey and fuzzy. He made a Triller video with the song and to his surprise, it blew up.

“I was scared to put it out because I know I don't sound like other rappers that’s around,” he says. “So I was like, ‘Dang, people are not gonna like it because it sounds different,’ but it was the complete opposite.”

Twoos calls his music “energetic.” A “party vibe.” A vibe that “makes you want to turn up all the time.” He raps over blazing fast beats, beats that take off and never slow down. And he keeps up with them, matching high hat after high hat, threading words together at a breathless speed. No chorus, no autotune. Just bar after bar after bar until the beat shuts off.

“I find the beat first, then I let the beat guide what I'm finna talk about because the beat's gonna tell me how I'm feeling,” he says.

The easiest way to blow up in St. Louis is to make a diss song, Twoos says. But Twoos doesn't make diss songs. Rather, he crafts his music to focus on the sound and the wordplay (“I used to love my [English Language Arts] classes,” he says). He doesn’t want people to get in the car and shut off his music because he’s dissing someone.

“They'll get the car and be like, ‘Turn it off,’” he says. “Now that person won't play that song around them anymore. You know, just bad for business.”

Shortly after he made released “Chicago” in March 2021, Twoos traveled to Miami for his friend's birthday. He booked studio time for the first time and recorded an album.

To his surprise, once again, the album, Pressplay, published July 4, 2021, went St. Louis viral. “It straight took me getting out to see what this could do,” he says.

And within the last year, his following has continued to rise. He has produced multiple songs that have reached 30, 40 and 50,000 views on Youtube. He no longer records from a closet but, rather, spends multiple days of the week in St. Louis studios, where he shoots to record four songs in two hours. Sometimes he writes songs and sometimes he freestyles them, though he would like to write more.
Twoos still lives in St. Louis, but he doesn’t intend to stay. He finds inspiration from Chicago rappers and dreams of making crowds faint like Michael Jackson.

But Twoos hasn’t made it out of St. Louis just yet. He’s on the brink of fading into the St. Louis rap scene or leveraging his local buzz to break into the mainstream. Twoos knows this. He has a checklist to achieve, he says, before he can call himself famous: an Instagram blue check, 100,000 followers, sponsorships and to “be able to have that voice."

“I feel like I got a voice, but only in my city,” he says. “I wanna have a voice all around the world.”