For St. Louis Foxes, a Happy Ending Thanks to Wildlife Rescue Center 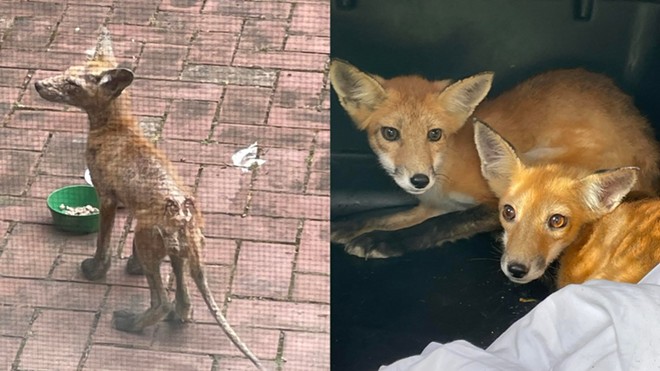 COURTESY NADINE SOKO RINEHART
After seeing the mangy foxes in her backyard, Rinehart worked to save them.
Nadine Soko Rinehart loves watching the animals in her Webster Groves neighborhood. She even puts out kibble for some of them.

“I feed a feral cat, and I feed possums,” she says.

In the spring, a red fox in her area had three kits, and she would see the babies playing in her backyard. “They would occasionally tumble on my grass,” she says. “They were like puppies.”

Mange is caused when mites burrow into the animals’ skin. Typically, animals can fight off the infection, says Kim Rutledge, executive director of the Missouri Wildlife Rescue Center, but when they can’t, the infection can get very bad.

“Once it gets bad, mange can cause the animal’s skin to crack,” says Rutledge. “For some reason, the mange mites really seem to like the skin around the eyelids.” This causes the eyelids to swell and the foxes can’t see.

By the time Rinehart noticed, the foxes were so sick they were out looking for food during the day.

“Healthy foxes hunt at night, and unhealthy foxes have to take what’s left over during the day and look for food,” Rinehart says. “They can die of starvation.”

“We usually see a pretty good number of mange cases but they’re usually later in the season,” says Rutledge, “more towards the fall. This year we had mange calls throughout the spring and summer.” She’s not sure why there was an uptick. But the center loaned Rinehart a cage to trap the foxes. After they walked her through what to do, Rinehart set the trap.

She caught the first fox within the day, loaded it in her car, and drove it to the Wildlife Rescue Center.

“They have a terrible smell due to the mange,” Rinehart says — like sweaty socks left in a gym bag. She put the cage on a rubber mat and a towel, just in case the fox urinated. It didn’t.

Wildlife Rescue Center took the fox and disinfected the cage. Then Rinehart used it again to trap fox number two.

This time, it took three to four days. Rinehart only set the trap out during the day, so the fox wouldn’t be trapped outside all night, and as soon as the fox was caught, she drove it straight to the Wildlife Rescue Center, rather than have it stuck in the heat.

The center has been busy — to the point that Rinehart was told they couldn’t accommodate the third fox until these kits were healed.

“They’re so nice there,” Rinehart says. “They had a whole discussion in front of me about where they were going to put the second fox because they had no more space.”

The foxes’ mange was severe, treatment took a few weeks. Mange is treated with the now infamous ivermectin or another anti-parasitic. Any secondary infections from running around with open sores are treated with antibiotics.

Once the pair were healed, the Wildlife Rescue Center brought them back to Rinehart’s house to release them.

“The first one bolted out, and the second one took a little longer,” Rinehart recalls. “He stood in my backyard, and he looked around before he found his sibling, and he joined him.”

Rinehart then had another issue: If the siblings reunited with the unhealthy one, everyone could get mange again. She set out the cage again, and trapped the final fox over Labor Day weekend.

If the third fox follows the same timeline as its siblings, it should be back in the wild by the end of the month. The wildlife center just has to make sure the fox is healed before returning it to the wild.

“We try to get them back out to their wild home as quickly as they can,” says Rutledge. “That’s absolutely what’s best for them and for [the center’s] limited resources.”

The Wildlife Rescue Center has seen an increase in animal patients in recent years, particularly between 2019 and 2020. This year, Rutledge says the center has gotten more than 20,000 calls about injured or orphaned animals. Fueled by donations and run primarily with help from volunteers, that’s high demand. Though a lot of people calling about orphaned animals actually haven’t found an orphan. The mom probably just left the baby along to go find food.

“There are lots of single working mothers in the animal kingdom,” Rutledge says.

If you want to learn more check out the Wildlife Rescue Center Open House (1128 New Ballwin Road, mowildlife.org) on Saturday, September 10 from 11 a.m. to 4 p.m.