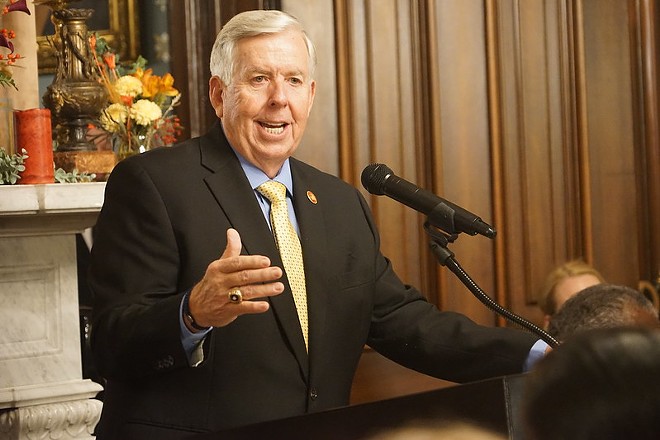 Missouri is like a family in which everyone has agreed that a vacation is sorely needed. All the schedules have been coordinated. Everyone has arranged to be gone. The packing is done. The car is loaded.

But they forgot to pick a destination.

When it comes to tax policy for its citizens, Missouri doesn’t know where it’s going. Governor Mike Parson is convening a special session of the General Assembly to start the car this week. That is not to be confused with selecting a direction.

Parson is the right man for the job if driving aimlessly is the preferred plan. Parson’s philosophy on taxes can be capsulized in two words: too high. It’s a popular position, having edged out “too low” and “about right” by roughly 99 percent of respondents in a recent survey of Missouri voters.

In keeping with that elegant doctrine, Parson has proposed a permanent cut in state personal income taxes from 5.4 percent to 4.9 percent. He’d also raise the standard deduction by $4,000 and $2,000 for married and single taxpayers, respectively.

But that’s not the shallow part. The purported reason for the tax cut is that Missouri just came into some money. It’s holding a record surplus of nearly $4.9 billion, nearly double the previous record set just a year ago, according to state budget officials.

These seem like riches to most of us. But most of us don’t spend $48.4 billion annually — just under 10 times the amount of that gargantuan surplus. That’s the size of Missouri’s budget for fiscal year 2023.

The surplus reflects nothing more than a short-term opportunity to the state. Stout as it might seem, it’s not nearly a large enough portion of state spending to merit a change to the permanent tax structure.

One doesn’t react to temporary revenue events with long-term changes in tax policy. That’s not some theory of advanced economics. It’s common sense, the trait for which Parson is most often extolled.

That’s why the governor should know better than to haul his bickering legislators to Jefferson City to wrestle with a piece of the state’s revenue structure. Especially since it represents a non-urgent matter that could easily wait until the regular session begins in less than four months.

The state constitution presumably limits a governor to calling an extra session only on “extraordinary occasions.” This one couldn’t be more ordinary; it’s a repudiation of government, nothing more.

Neither Parson nor the Republican Party recognizes a need for Missouri to develop a strategy on the revenue side. But it’s not rocket science. There are 49 other states in the nation and, as diverse as they are politically, they share much in common.

None of their citizens enjoy paying taxes. All states have a responsibility to fund services in education, health care, social services, public safety and so forth.

All states draw revenue through taxation. Most acquire it through such sources as corporate and personal income, property, tourism and other sales, and even sin. States often diverge in their approach, but all of them need to collect revenues for the purpose of providing services to residents.

The Federation of Tax Administrators keeps score on such matters. Its 2021 data is both current and compelling in ranking the 50 states in two categories: 1) total state taxes per capita; and 2) total state taxes as a percentage of personal income.

But look a little deeper. The 46th-place rankings leave only five states (the rankings include the 50 states and D.C.) in the U.S. “friendlier” than Missouri as to state taxes: Alaska, New Hampshire, Florida, Texas and South Dakota.

Do you know what all of these states have in common? It’s something very tangible to show for their low-tax environments: They collect no state personal income taxes. (New Hampshire does take in a 5 percent tax on dividend and interest income.)

These states lead with their income-tax-free status in attracting new residents and companies. It’s a huge selling point, one also available to Nevada, Tennessee, Washington and Wyoming.

But here’s the problem for Missouri: We’re the fiscal equivalent of half-pregnant. Because the state has no plan or direction, poor services are all it has to show for its low-tax status.

Look how badly Missouri has lost the room at austere Kiplinger’s “State by State Guide to Taxes on Middle-Class Families.” It doesn’t come close to making the list of “10 Most Tax-Friendly States” for either this group, or a similar one for retirees.

“It's easy to see why the Show-Me State gets a ‘mixed’ tax rating,” Kiplinger writes. “For the three major taxes – income, sales and property taxes – state and local levies are neither very high nor very low. Missouri recently lowered its top income tax rate from 5.9% to 5.4%. But the state's income tax bite is still average because the top rate kicks in quickly.”

I don’t advocate for the elimination of taxes because — liberal that I am — I hold to the draconian view that a state should pride itself in delivering high-quality education, health care, public safety and all the rest to its citizens. Missouri does not, which is shameful.

The consequences stretch far beyond perception. Every day Missouri squeezes its state workforce while presumably expecting it to deliver services at the same level or better as the other states. The big news in 2021 was that Missouri moved up to 49th place in government employee salaries after three straight years at dead last.

Here’s how that was scored at openpayrolls.com: “The average employee salary for the State of Missouri in 2020 was $28,871. This is 56.2 percent lower than the national average for government employees and 52.3 percent lower than other states.”

That sounds like a great recipe for success. Just like underfunding schools and health care and neglecting roads and bridges.

Don’t believe for a second that cutting the personal-income-tax rate by one half of 1 percent is something Missouri can turn into a commercial. A 4.9 percent rate — which is relatively low — is 4.9 percent too high when compared to the no-income-tax states.

That speaks to the essential problem with Missouri’s reckless approach to taxation. There’s no plan. Every proposal gets viewed in a vacuum, not only failing to consider how to replace lost revenues from lowered taxes, but without any context as measured by the practices of the other 49 states.

It’s precisely the opposite of a comprehensive strategy. It’s the same fiscal disarray that sees the most central state in the nation forgoing tens of millions in revenue with its low gasoline taxes — funds that could be garnered from cars and trucks passing through from other states. And there’s the ultimate stupidity of a tiny tobacco tax that could be doubled — bringing in $70 million or more in annual revenues — and yet still remain lowest in the nation.

The state’s problem has nothing to do with conservative politics and everything to do with an anti-tax, anti-government orthodoxy that substitutes unapologetic emotion for any form of reason. So, it should be quite the spectacle this week when Parson turns the key to his clown car.

When it comes to taxes, this state is lost on a dark highway.