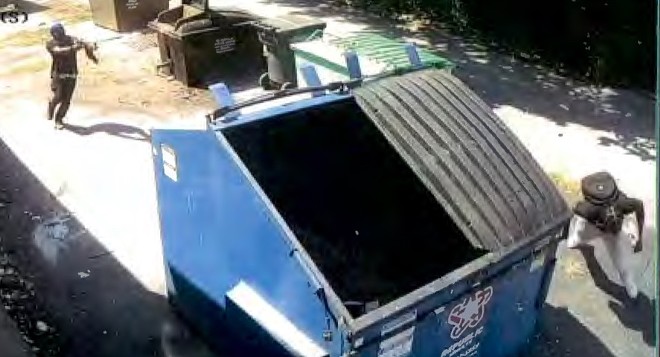 A Georgia man is accused of traveling to St. Louis to commit a “brazen retribution killing” after a family member was killed here in July.

Darius Griffin, 31, made his initial appearance in federal court this afternoon. He is currently charged with being a felon in possession of ammunition, though additional charges either at the state or federal level are likely forthcoming.

According to the federal indictment, Griffin’s relative, identified in court documents as MG, was killed in St. Louis in early July.

A man identified only as VJ was a suspect in MG’s murder, according to the indictment.

Griffin is alleged to have traveled here from Georgia and tracked VJ to a grill and market on the 1100 block of North Kingshighway.

“There,” the indictment alleges, “[Griffin] waited approximately 20 minutes for the opportunity to ambush VJ.”

Surveillance video captured the altercation. A man whom the indictment says is Griffin chases VJ through the alley near the market.

“[Griffin] held what appeared to be a semi-automatic rifle and fired multiple rounds at VJ as VJ searched for cover,” the indictment reads.

A still of the surveillance video shows VJ attempting to take cover behind a Dumpster.

The indictment states that the attack ended with “several close-range shots,” which killed VJ.

According to the indictment, a white car with Georgia license plates arrived at the scene of the killing and later was captured by license-plate readers returning to Georgia.

This afternoon in court, Assistant U.S. Attorney Ryan Finlen referred to the evidence in the case as “voluminous,” referencing the surveillance video as well as other items of evidence.

We welcome tips and feedback. Email the author at [email protected] or follow on Twitter at @RyanWKrull.
© 2022 Riverfront Times