The moment that Victor Goines really got into jazz is seared into his memory.

He was 13 and had only begun to experiment with the genre, imagining himself as a classical clarinet player instead. But there Goines was with a fellow budding musician — his good friend since kindergarten — who put on a record of John Coltrane’s “Countdown” and played along on his trumpet.

“It was phenomenal,” Goines says. “It was really extraordinary to hear him play that and to hear John Coltrane for the first time. It was a mind-blowing experience that I’ve been in pursuit of my entire life since then. It really ignited the jazz flame in me.”

Yet, even next to the famous trumpet player, Goines himself is no slouch. Since 1993, he’s been a member of the Jazz at Lincoln Center Orchestra and the Wynton Marsalis Septet. Until earlier this year, he directed jazz studies at Nonwestern University, and he has more than 200 original compositions to his name. He’s also recently been named the new president and CEO of Jazz St. Louis and will step into that role on September 19.

“[It feels] priceless, you know, to have this opportunity,” he says. Goines hails from New Orleans. He first came to music because of his mother — she thought playing a wind instrument would help his asthma. Soon, the medicinal side of music fell away as Goines came to study under a series of great teachers and alongside players such as his pal Marsalis, sneaking into the city’s jazz clubs, such as Tyler’s Beer Garden.
click to enlarge 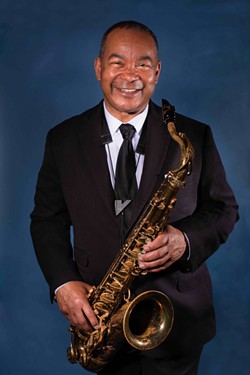 Sarah Escarraz
Victor Goines is a member of the Jazz at Lincoln Center Orchestra and the Wynton Marsalis Septet.


“I was around enough that they started to recognize me and say, ‘Hey, just come on in man,’” Goines recalls.

He went on to study at Loyola University in New Orleans and then at Virginia Commonwealth in Richmond, Virginia, and is currently at work on a PhD Boston University. That never-stop-learning philosophy has roots back to a series of great teachers growing up, including his clarinet and saxophone instructor, Carl Blouin, who also doubled as his mathematics teacher.

After high school, Goines asked Blouin about applying for a job as a math teacher. “He said, ‘I don't know if you will get the job if you apply, but I guarantee you won't get the job if you don't apply,’” Goines explains. “And that has been my story about everything that I do. I have not gotten everything that I wanted. But whatever I didn't get I always say I've made a very good attempt to make sure that it was a strong effort to pursue my particular beliefs and visions.”

Goines did go on to apply and get the job, even earning a math certificate. Later on, he’d find himself answering bandmates’ kids’ math questions, laughing as he recalls going over 50 of Marsalis’ son’s math homework problems one night after a concert at Jazz at Lincoln Center.

“I get joy out of doing that, of helping students,” he says. When Goines retired from his teaching post at Northwestern Earlier this year, he was looking for something different. He’d been aware of the opening at Jazz St. Louis but didn’t initially intend to go after it.

Then he kept hearing from friends and colleagues — including from Marsalis — that he should pursue it, that they’d recommended him. “All these doors are starting to swing in a certain direction,” he recalls, thinking of Blouin’s advice all those years ago. So he applied, and got the job.

Goines intends to start out by doing something musicians really know how to do: listening. He wants to know what’s really working and what things can be tweaked to work that much better so that the organization can be improved in the long run.

It’s all about building upon the strong foundations that already have been put in place, he says.

“I would like to elevate the status of Jazz St. Louis to not just being known around the world but being world renowned,” he says, “but at the same time, as is in the mission statement, to realize it’s there to serve the community.”