A day after his mid-concert fall in St. Louis, Post Malone is taking his now-viral tumble in strides.

The rapper fell through an open trap door midway through his concert in St. Louis on Saturday. He fell through the hole that stored his guitar.

The fall bruised Malone's ribs, but that didn't stop him from continuing his tour to Columbus, Ohio, over the weekend and poking jabs at his blunder that received national news attention.

In Columbus on Sunday, a day after his fall, a concert-goer captured video of Malone disrespecting a (this time closed) trap door, similar to the one that made him beef it hard in St. Louis. 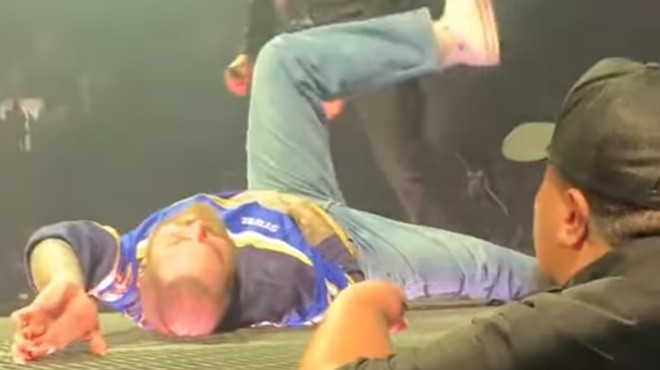 
As he sang "Circles," the same song he performed before falling in St. Louis, Malone knelt slightly to the closed door and exacted his revenge: flicking the door off while dancing in a circle.

The Columbus-Dispatch reports that Malone gave Columbus "all he had" Sunday night. The rapper still has several tour dates listed on his website.

In a video posted posted to Twitter on Sunday, Posty apologized to St. Louis and thanked fans for their support after he "got my ass kicked by myself."

"Next time I'm around this way, we're gonna do a two-hour show for you so we can make up for the couple songs we missed," Malone said.